Time Machine is an awesome tool for backing up Mac. Even so, here are 3 other options to have in mind, depending on your needs.

Periodically backing up your hard drive is something everyone should do. These days, there are so many tools that make the job easy, you’ve really got no excuse. 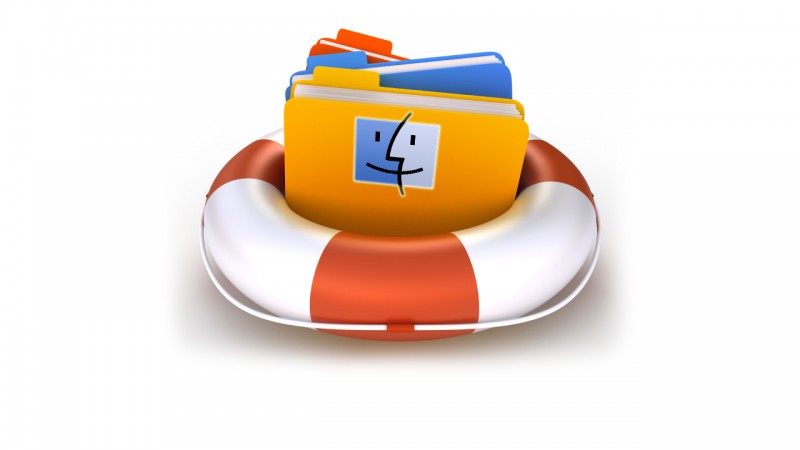 By default, OS X offers Time Machine, which creates incremental backups on a periodic basis, and if you ever need to use it (HD failure, kernel panic), it lets you to back up your Mac.

But Time Machine, by its nature, has very few personalization options. Often times, that’s not a problem, but there are times when you’re going to want more control.

Bearing that in mind, here are 3 great alternatives to Time Machine that will let you clone and restore your Mac’s HD: SuperDuper!, Carbon Copy Cloner and Paragon Drive Copy.

I remember using SuperDuper! for the first time about 7 or 8 years ago. At the time, Time Machine wasn’t around, and I was looking for a good backup program. I read about SuperDuper. It was billed as “idiot-proof”, in the sense that anyone could use it, and it was easy to see what you were doing before you started, thus avoiding potential disasters.

After I tried the demo, I immediately whipped out my credit card and bought the full version. I also sent an enthusiastic email to the developer, complementing him on a great program. And I still use Super Duper! today.

Depending on what you’ve picked, you’ll see a simple explanation of your particular combination in the middle of the interface. 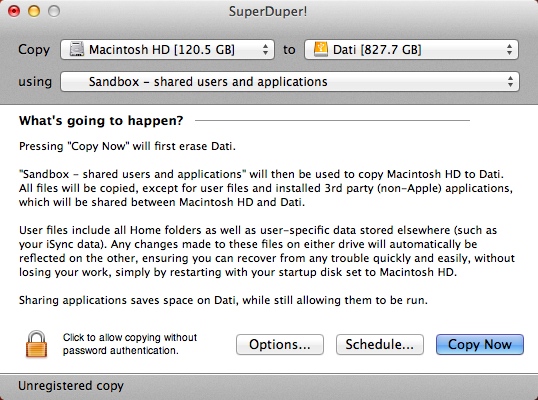 From Preferences, you can refine the operation by enabling some important options. The most interesting is probably Smart Update. If you’ve already done a full copy of a disc on another disc, this tool allows you to integrate it– basically, it’ll copy the files that weren’t there in previous backups, and will replace the ones that have changed without touching the ones that have stayed the same.

This means that you’ll always have a backup, and save a lot of time, because after the first backup, subsequent ones are much faster. The system, known as incremental backup, is similar to that used by Time Machine. You can also schedule automatic backups periodically.

In Settings, you can choose what your Mac should do once the backup has been made. Among your options, you can reboot using the newly made backup as a bootable disc, turn the computer off, or put the computer to sleep and eject the disk where you made the backup. 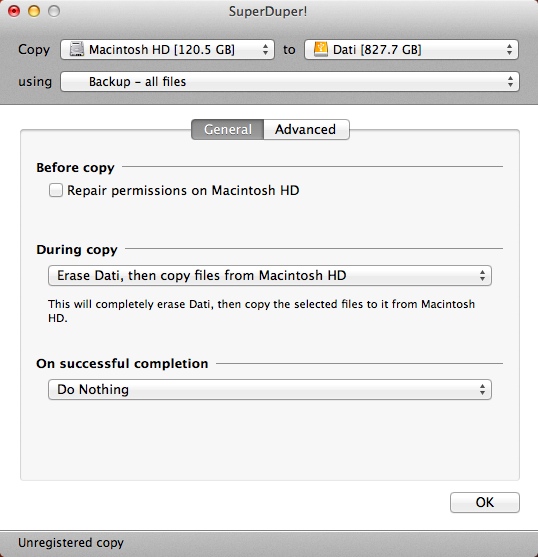 As if all this wasn’t enough, SuperDuper! offers a full trial version with no time limits. Even better, it has very few restrictions compared to the full version. Incremental backup, unfortunately, is among these limitations: you’ll only get it with the full version. Fortunately, the full version is priced very reasonably. It’s a great backup program, and has years of conscientious development behind it.

The latest version is compatible with OS X 10.6, but you’ll find versions for operating systems as old as Mac OS X 10.2 Jaguar on the developer’s website.

Also known as CCC, this is the old-school backup program for Mac. CCC has always staked everything on the strength of its bootable backup. The scenario that was (and still is) painted by developers is this: you’re working on an important project, you’re about ready to finish, and suddenly, your Mac stops working. The HD pings worryingly, and everything disappears.

With a classic backup, you’ll spend an entire day buying and installing a new disk, reinstalling the OS and programs, and finally, restoring the data. With CCC though, just boot the Mac from the backup and you’re immediately operational. When you want, you can restore the backup to your new hard drive and magically, everything will be as it was before the disaster. This apocalyptic picture is no longer as effective as it once was, because bootable backups are no longer the exclusive domain of CarbonCopyCloner, but the program still does a great job.

Compared to SuperDuper! and Paragon Drive Copy (which we’ll talk about later), it’s slightly more complicated to use. On the other hand, you’ve got almost total control over customization, including what to include in the backup, what to exclude, and how to process the data. 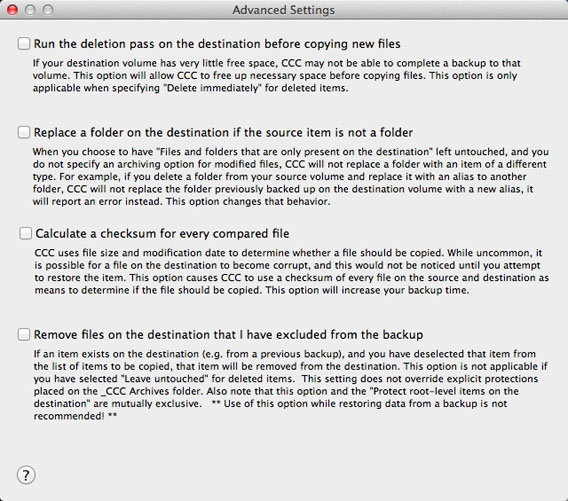 Some of CCC’s many settings

An experienced user with non-standard requirements will probably need to make several tweaks to the process, but that doesn’t mean that it’s insufficient for the average user. By choosing the source drive and the destination– and leaving the parameters to their default values– you’ll get a complete and bootable backup of your Mac’s HD.

If you want to venture into custom and advanced parameters, you’ll find a mine of options that give you total control over every operation. 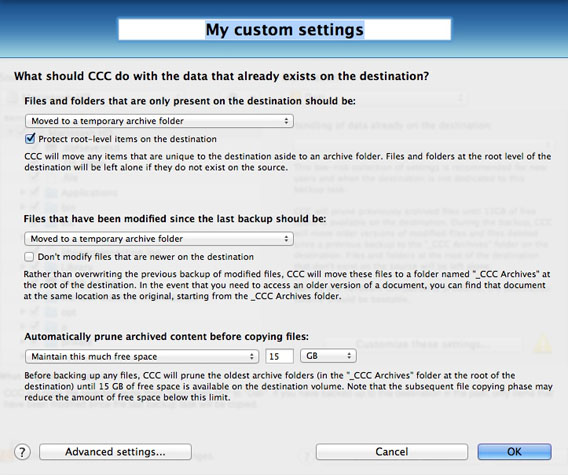 Many of CCC’s parameters are customizable

CarbonCopyCloner also offers incremental backups, plus the ability to save the backup to a disk image. You’ll be notified by email whenever a new backup copy is made, which you can save to another Mac on the same local network, or a remote network using an internet connection.

Another very useful function: you can keep your Mac awake and set CCC to perform a backup at a specific time (say, at night), and then put the computer to sleep.

CarbonCopyCloner is an excellent alternative to Time Machine, especially for those who are more familiar with the technology and have specific needs, but also for those who want one of the most comprehensive tool in the product category.

Paragon Drive Copy: the future belongs to the young

This product is new and, at the time of writing, is in open beta, meaning anyone can test it for free. The interface of Paragon Drive Copy for Mac OS X Beta, at least in this beta, is pure OS X style, simple and familiar to any Mac user, and using the app will come easily to pretty much anyone. 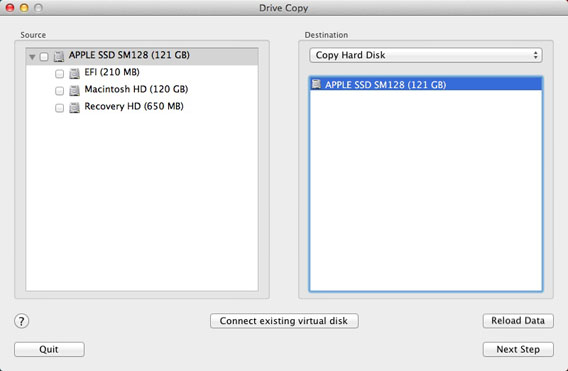 This tool differs from competitors because, in addition to the traditional method of copying a disc to another HD, it allows you to clone the hard disc of your Mac into virtual containers, more specifically, in the pVHD format: VMDK, VHD and VDI.

What are these containers? Basically, they are files that contain the virtual hard drive (disc image), used by programs like VMware or VirtualBox. In practice, Paragon Drive Copy is able to copy your hard disc in formats that can be read from virtual machines.

You can use these containers as simple backup and restore them to a HD, or you can start them as virtual machines and use them as if they were physical computers.

Another feature of Paragon Drive Copy that we like: use simple drag and drop to establish the size of the disc you’re copying to a hard drive another location. This lets you create a backup of the exact dimensions of the copied disc, without wasting extra space on the destination disc. 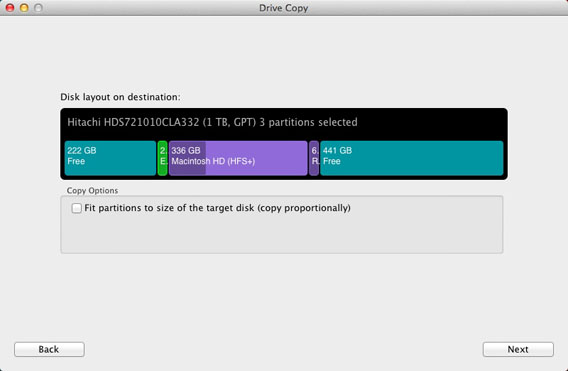 Summing up, you have lots of good options for backing up your Mac. The three lsited above are all of great quality and reliable.

Want clarity and transparency? There’s SuperDuper! Would you like completeness and speed? Then choose CarbonCopyCloner. Would you like simplicity and innovation? Paragon Drive Copy is the one for you.

The main point is, make regular backups of your HD. Even if you decide to stick with Time Machine, make sure to set it properly the first time, and you’ll be able to sleep soundly.

How to Set UC Browser Wallpaper in 2 Easy Ways