So the end of February also saw the end of an era – the result of an announcement at the end of last year by AOL, the last owners of Netscape Navigator, that work and support on the project would officially end. The figures say it all – over the past decade, the once dominant browser has gone from a market share of 90% to just 0.6%. It may seem outdated and archaic now, but Netscape’s legacy for internet users is considerable – not least that from it emerged Firefox.

For those who remember the early days of the internet, they may even shed a tear at the news as Netscape Navigator will be the first browser through which they first accessed the amazing world of the internet. I remember at my university, it was the standard browser installed on all machines and although by today’s standards it was painfully slow, clunky and just plain boring, it did open up a whole new world and without doubt, set the blueprint from which the browsers of today developed.

Netscape was originally launched in 1994, the brainchild of Marc Andreessen who founded the Netscape Communications Corporation. By 2002, the browser’s user base had almost completely disappeared however as more innovative and browsers such as Internet Explorer and Mozilla Firefox started to dominate the market. 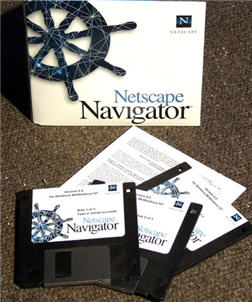 Netscape’s commercial history is quite interesting. Embracing the spirit of freedom that early pioneers of the internet encouraged, it actually started out as a free browser but within months of its launch, the makers presumably saw the massive demand and commercial potential it had and quickly reversed the decision making it free only for educational and research institutions. However, it was made available as an evaluation version after which people were merely encouraged to pay for it once they were satisfied. In the end, the company realised this was a fairly futile policy and decided to make it completely free with limited support and then eventually withdrew all support as demand was simply impossible to satisfy.

So what are the key features that we should thank Netscape for but take for granted today? There are two main areas that Netscape was the first to come-up with:

On The Fly Display of Webpages – Before Netscape, users would often have to wait until everything had downloaded before they could read anything. Netscape displayed text and images as they downloaded – essential at a time when everyone was on dial-up connections.

Technical Innovations – Netscape was the first to introduce the use of cookies, frames and Javascript – pure browser basics that have become key browser concepts. Especially in respect of cookies, Netscape was widely criticised for what many perceived as its attempt to track and follow users.

It was of course, big bad Microsoft that finally came along and spoiled Netscape’s party. Microsoft saw the huge popularity of Netscape – estimated to be used on at least 50% of PCs across all platforms – as a threat to the popularity of the Windows operating system. As a result, they developed Internet Explorer, although it wasn’t until version 5 that the new browser finally overtook Netscape’s market share. The ensuing years saw a huge battle breakout between Microsoft and Netscape but Microsoft won through largely due to IE’s much better handling of the increasing number of graphics on the net, its investment in Apple in exchange for removing Netscape from Mac OS and replacing it with IE but most of all, Microsoft persuaded all the major Internet Service Providers to encourage their customers to use IE over Netscape.

By 1998, Netscape saw no other option but to go open source with its code but its developers eventually concluded that the code was so poor and prone to errors that nothing more than a full re-write would suffice. The rewrite went on to become Netscape 6 and 7 and, when combined with the Gecko engine, eventually became the blueprint for the Firefox browser that we know and love today.

Netscape’s passing may have gone with little more than a whimper but its contribution to the development of the internet has been nothing short of awesome. PC World Magazine considered it so important, that in 2007, they declared it the “best tech product of all time” due to its legacy.

Not bad for a browser that used to take more than 5 minutes to open my Hotmail sometimes.