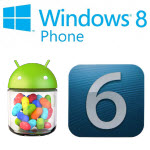 Google’s 2012 I/O keynote was the last of the big Spring announcements. After Apple revealed iOS 6 and Microsoft showed off Windows Phone 8; Google demoed Android 4.1 Jelly Bean. While Microsoft was the most vague on the release of Windows Phone 8, iOS 6 has a Fall 2012 release and Jelly Bean will get pushed to three devices in mid-July.

Each company presented its plans for its operating systems, and whether it’s an update or full upgrade; users will be seeing changes. It’s not easy to compare each announcement, but thinking about what’s going to be released this year; I wondered which reveal was the most interesting.

Apple showed off its new operating system without new hardware, Microsoft showed a new OS that would only be supported on new hardware, and Google displayed an update to Android while revealing new hardware.

The common connection between all three companies was location services and that looks like the fight that will occur this Fall.

Maps and turn-by-turn directions were highlighted by all three companies in some way. While Google didn’t have a specific Google Maps keynote during Google I/O 2012, its separate Maps event introduced changes.

Google’s introduction of Google Now is bridging Maps and other services together. By integrating Google services into search like a personal assistant, you receive a large amount of information in real-time. The demo in Android 4.1 Jelly Bean illustrated how connected you can be based off of your habits and tendencies. While it will only be available in Android 4.1, separate Google apps are already supporting some of the features.

Apple’s move to its own mapping service is interesting. Backed by TomTom along with other companies, Apple Maps could be a could be a much needed replacement for Google Maps that was included in previous versions of iOS. The beta’s turn-by-turn directions are easy enough to understand, but we won’t really know how useful Apple Maps will be until iOS 6 officially releases.

Microsoft and Windows Phone 8 will use Nokia Maps to assist their users with offline maps and turn-by-turn directions. The app will learn your travel habits and give you alternate routes based off traffic conditions.

Google Maps has always been strong and Microsoft’s Nokia-backed Maps look like a solid product. Only Apple Maps is the big unknown because the official version isn’t released. 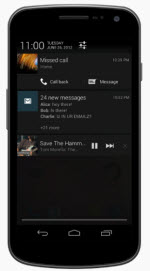 Integration goes beyond first party services and social networks to include how much users can do with the device and OS in their daily lives.

Google has integration of Google services, but there is a lot of overlap. Google+ still feels lacking and why aren’t Google Talk, Google Voice, and Messenger combined yet? Android 4.1 increases the integration of first party and third party. Google Now bridges many services into one. The new upgrades to the notifications shade show more than simple text, making notifications actionable so you can accomplish more without opening apps.

iOS 6 brings Facebook integration and Passbook, but integration in iOS has always felt empty. Syncing Safari via iCloud is a nice option, but there isn’t one place to connect multiple services together. iOS users have to launch apps (besides Twitter and Facebook) to act upon them.

Windows Phone 8 contains social network integration and Microsoft services, and the use of NFC for devices is an interesting concept for multiple devices. The announcement of Native Code means that apps will be able to work on both Windows 8 and Windows Phone 8 with few issues, but the systems are still separate and further integration hasn’t been revealed yet.

If you own multiple iOS devices, it’s relatively simple to link your Apple ID. It’s the same for Android and your Google account. Microsoft is really pushing integration with Windows Phone 8, but it hasn’t really been shown off yet. Each operating system has a level of social network integration, but Google’s wide variety of products are also available on iOS.

Each OS offers its own style of integration, but the new notifications in Jelly Bean are the most impressive.

The UI of each OS didn’t undergo drastic changes. iOS 6 keeps the same now-stagnant interface with set placement of icons and folder creation. Android 4.1 introduces smart widget re-sizing and Windows Phone 8 also allows users to customize Live Tiles to an impressive degree. I think that Windows Phone 8 has the most customization for a stock-set OS. The layout of the OS hasn’t changed from Windows Phone 7.5, is intuitive for users, and the ability to move tiles into any space is nice. 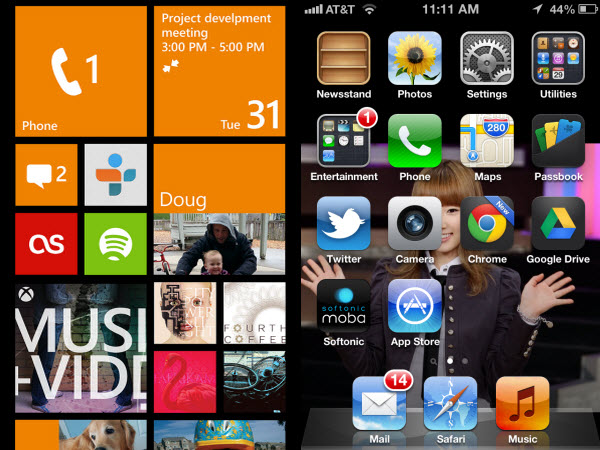 Jelly Bean is the most open in terms of custom homescreens and that’s always been a strong feature. Combined with folder creation and numerous widgets, an individual can have a UI that’s completely unique. iOS has basically added new apps to the homescreen and unlike Newsstand, they can get placed into folders. It’s still very unfriendly to users who have to create multiple screens and multiple folders to organize all their apps.

In terms of a stock experience, Windows Phone 8 sits in the best spot between developer control and user customization.

Looking back at the three keynotes, there wasn’t an entire refresh for any of the mobile operating systems. iOS 6 adds more features, but keeps the same boring UI that hasn’t been changed since iOS launched. Android 4.1 improves performance and adds Google Now, connecting different services into a persistently available location assistant. Windows Phone 8 upgraded to entirely new hardware, but the usability of the OS is very tightly bound to the availability of the hardware and upcoming support with Windows 8.

I think Android 4.1 is an excellent improvement for the OS that developers and more technical users will enjoy. Windows Phone 8 may become a replacement for average users who are starting to find iOS boring or value Microsoft’s services. Fall will really show how well these announcements are implemented when the operating systems and devices they supported are released.

There still isn’t a clear winner because users can benefit from any of these updated operating systems, but my bet is still on Android.