The upcoming version of Android, version 4.3, has been leaked by Google+ user Jeff Williams. Williams apparently purchased a Nexus 4 device from a Google employee who forgot to roll the device back to Android 4.2.2. With the help of the Google+ community, Williams was able to create a system dump to share with other Nexus 4 users.

Those looking for huge differences in Android 4.3 will be disappointed. There are only a handful of new features that are mostly targeted toward developers and improving the responsiveness of the operating system.

One change in Android 4.3 is the dialer, which provides suggestions for numbers you’re dialing. This means you can start dialing a contact’s number and his or her name will show up at the top for you to tap. There’s also a new option to pause for a few seconds before calling a number.

There’s also an updated camera app with a arc menu system, which was leaked a few weeks ago. The new menus make it easier to change settings by tapping and holding your finger down. Performance of the camera seems to be the same. 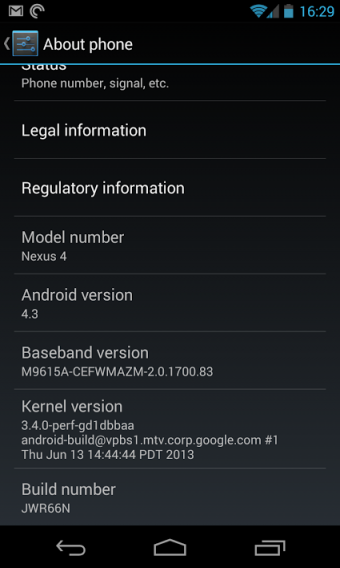 In the Wi-Fi settings, users will find an option to enable “Scanning always available”, which lets the phone use Google’s location services even when Wi-Fi is turned off. This would stop apps pestering you to enable Wi-Fi to get more accurate coordinates.

There’s also a new notification center history section that shows all of your previous notifications. It’s speculated that Google is preparing more wearable devices like Google Glass, which need to provide users notifications of system alerts. Android 4.3 also supports Bluetooth Low Energy, which will reduce the amount of battery life required for tethering wearable devices to your phone.

Overall, the updates to Android 4.3 seem very minor but it’s nice that Google is polishing up its operating system.