As a recent convert to the joys of smartphones, I keep a close eye on the top Android news. I was pretty surprised to read two pieces of scary news in a single day recently. Over in the UK, veteran broadcasters the BBC have apparently created their own malicious smartphone app to see how easy it would be to track users and steal data. It was deliberately a very simple code masquerading as a game and, unfortunately for us, it worked pretty well.

Meanwhile on the other side of the old continent, Kaspersky Labs claims to have discovered the first Trojan specifically targeted at Android in Russia. The malicious code is apparently disguised as a media player and, once downloaded, sends text messages to a premium number without the owner’s knowledge.

Even though we always take virus warnings from anti-virus manufactures with a pinch of salt, the concept of new risks for smartphones isn’t surprising – if there’s a new device out there that hasn’t been infected with something nasty, it’s just a matter of time until it is. Even so, all you Android users out there need to be aware of two things in the midst of all this hysteria: firstly, anybody who was infected with the trojan installed the software willingly. Secondly- and most crucially –  they also had to give it explicit access to the features it misused. 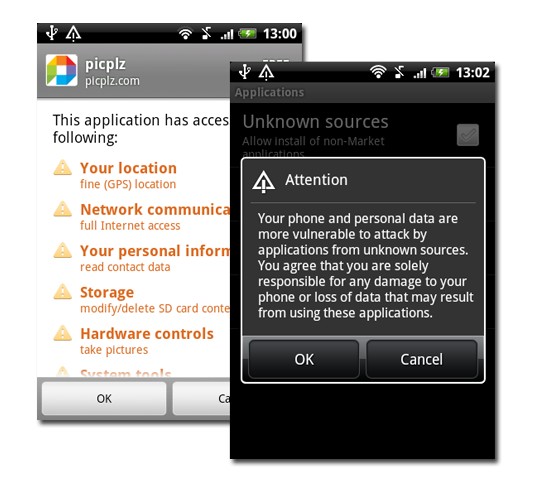 Google, Android’s developer, reminds users that any software downloaded in their Market has built-in protection against this, in the form of a stopscreen that explains exactly what items an application from the Market will be able to access. Third-party apps don’t have that extra layer. Viruses suck, but I think that in this particular case, we can safely conclude that the infected users pretty much brought the problems on themselves. Being OnSoftware, however, we’re not going to leave the paranoid among you without any options. If you really do think you’re running a risk, check out Antivirus. We don’t though, so rest easy, responsible Android users, you’re safe!