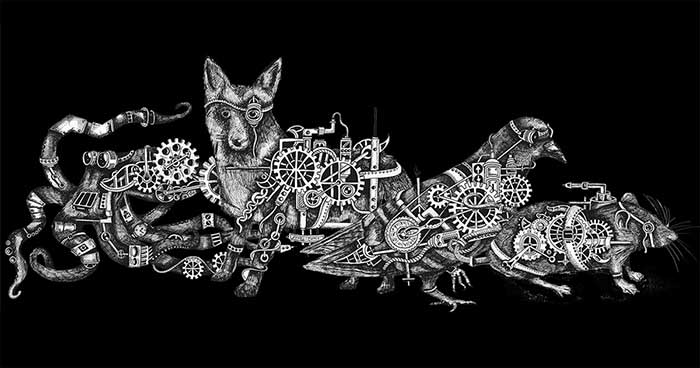 If you think about it, AI’s aren’t much different than chimpanzees. They’re both unpredictable, meltdown-prone creatures whose intelligence slowly and scarily approaches our own. Naturally, it’s only right that we pit them against each other in a desperate attempt to save our species.

Enter the Animal-AI Olympics: where chimps and other members of the animal kingdom compete for fame and glory against soulless automatons. The AI’s match up against “established benchmark tests” (a.k.a. tests that various animals have completed in the past). You can watch a brief video of the competition below.

The whole basis behind the competition is that currently, artificial intelligence is totally capable of beating humans at specific tasks. Whether that be beating a chess master or top-level Starcraft players at their own game, AI has shown the capacity to master specific tasks to the point of beating the most proficient human beings.

However, if you took the same AI that mastered chess and had it play checkers, for example, that AI would fail hopelessly. The brain of an animal is completely different. For example, while a dog would never come close to beating a human at a strategic game, the mind of a dog is much more adaptive than an AI, allowing them to better complete a variety of smaller and simpler tasks.

Hence the goal of the Animal-AI Olympics is to create adaptive AI instead of specialized AI. This ability to adapt and complete simple problems is called generalized intelligence, which is present in many animals, including crows, rats, dogs, and chimps.

At the competition, entered AI’s will be exposed to hundreds of tasks that they have never seen before, which tests their ability to solve general problems instead of mastering one. Researchers can then compare how the AI performs compared to the animals, allowing them to study various forms of generalized intelligence. Animals generally have an advantage in these competitions due to millions of years of evolution leading to finely tuned senses and instincts. These generalized intelligence tests can also be applied to babies and small children, and as AI evolves, it should be able to complete these tasks with a similar aptitude to a grown human.

If we are to fully integrate AI into our households and everyday lives, then they need to have some form of generalized intelligence. If AI can achieve a sort of biological intuition, then it will be significantly more useful than a specialized AI at completing and adapting to various tasks. Of course, there will always be a need for specialized AI to complete specific tasks that are incredibly difficult or impossible for humans to do. The future of AI is generalized intelligence. If an AI has the ability to adapt and improve itself, then it won’t have a need for human tinkering. The thought of this is somewhat terrifying, but rest assured that today, the chimp is still kicking the AI’s ass.