Like every year, we’ve once again carefully examined the top antivirus programs of 2013. Our criteria for analysis include the best antivirus for virus detection rate, system performance and quality of the user interface. 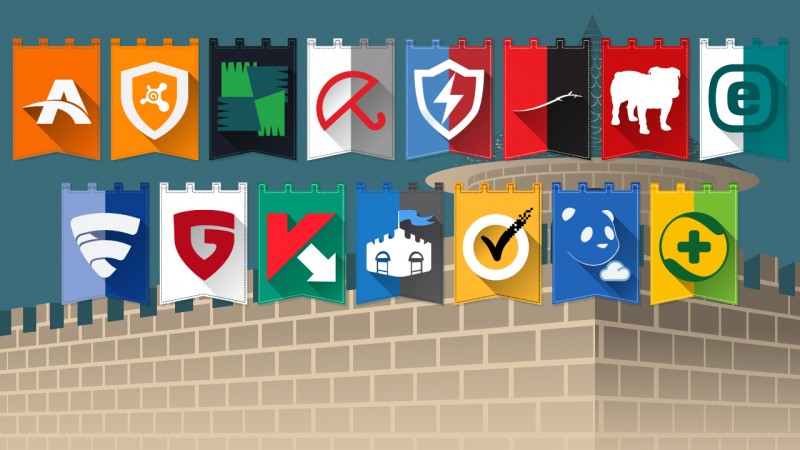 Free and commercial in a single overview

In this year’s comparison, commercial and free anti-virus software compete head-to-head. Products like Norton and Kaspersky can compete with free software like avast!, AVG, or Avira, giving you both paid and free versions to choose from. 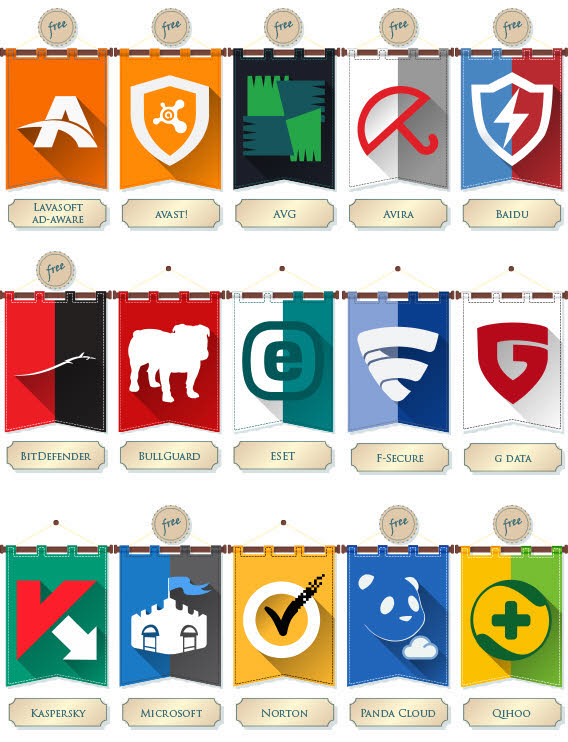 For the first time, we’re not comparing actual products such as avast! Free Antivirus or Norton Internet Security, but rather aspects that are the same in the various editions, including shield and scan components from the individual manufacturers.

As a result, our analysis is aimed at users who expect powerful protection and think of additional functions as secondary features.

Our tip: first, select the software. Then, you can decide on an edition, depending on your need for additional features. Many additional features of the premium editions such as backup, cloud storage, browser protection, encryption, or parental control can also be found in free programs.

In addition to the overall best antivirus software for 2014, we’ve selected a number of other award winners:

Our winner: The best antivirus software for 2014

For the evaluation of programs, we relied on a rich set of data from the past year. Our partner, the renowned test laboratory Virus Bulletin, tests the recognition rates of 30-60 antivirus programs and system performance every two months.

Virus Bulletin runs these individual tests exclusively for us. Additionally, we test all the programs using their benchmarks. We evaluate interface and features separately.

Long-term data instead of individual tests

Our winners are not based on a single test, but on the average test results over the course of the year. This ensures the long-term quality of the winning programs.

Based on this information, we determined our individual marks for safety and performance. The help of a test editor for the variety of features combined with the basic results ultimately gives us our 2013 Softonic Rating.

So, here they are, the results for fifteen of the most popular anti-virus programs, sorted by overall score. 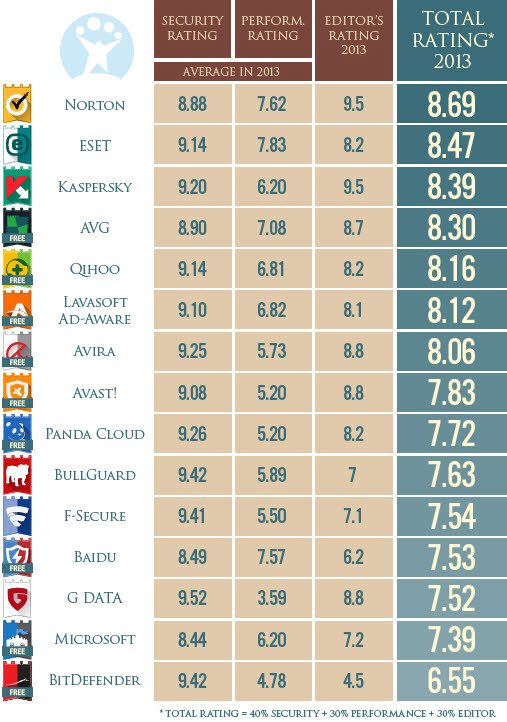 This year’s big winner is Symantec/Norton with its Antivirus, Internet Security and Norton 360 products. Norton convinces with high ratings in all categories and seals the deal with its user interface and many standard features.

ESET is up there with Kaspersky with very good performance values. Light compromising on user interface made no difference. AVG is the best free solution this time, although it only reaches fourth place. Last year, we were able to crown Avira Free Antivirus as the big winner because of good performance values ​​in this category, however the competition this year has improved significantly. 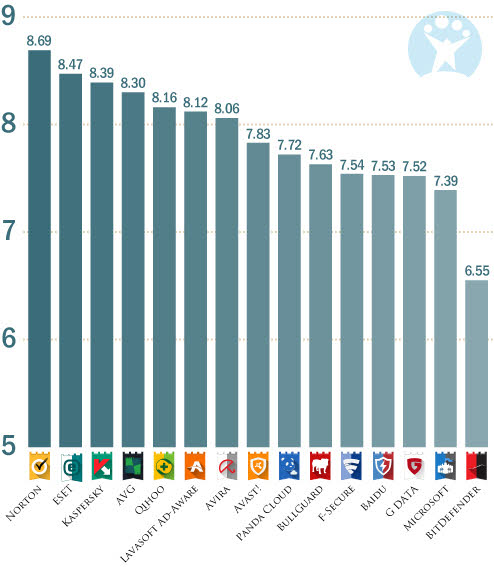 Check out our winners this year in our video overview:

The best antivirus software for protection

In the table below, alongside our Softonic rating (for reference), you can see the security score from the independent testing laboratory AVtest.org. Avtest.org tests differ slightly from Virus Bulletin, and they assign a maximum of six points. As you can see, our winners are also confirmed by the data from AVtest.org. 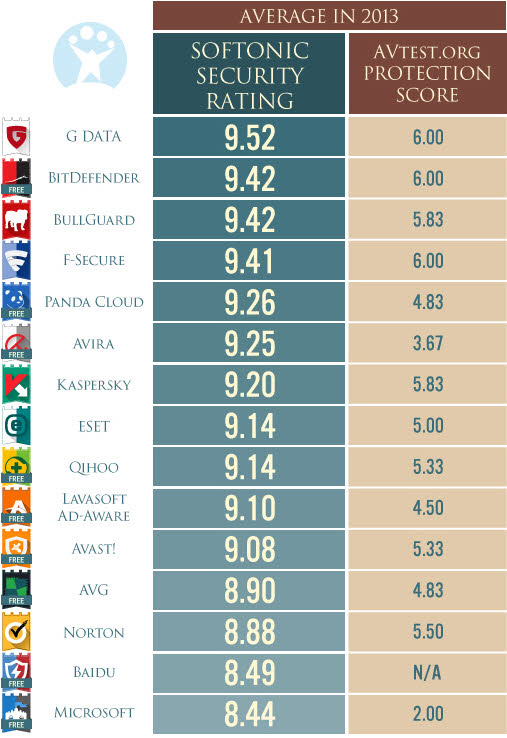 A look at the chart illustrates the last places particularly well. Microsoft (Security Essentials, Windows Defender) isn’t overly convincing in last place, since the scores are relatively close, but it’s clear that the results for all products are good overall.

The Softonic Security Rating reflects average recognition rate of known viruses. A software with a rating of 9 recognizes, on average, 90% of viruses present. Microsoft was last here, but still achieved a value of 84.40%. 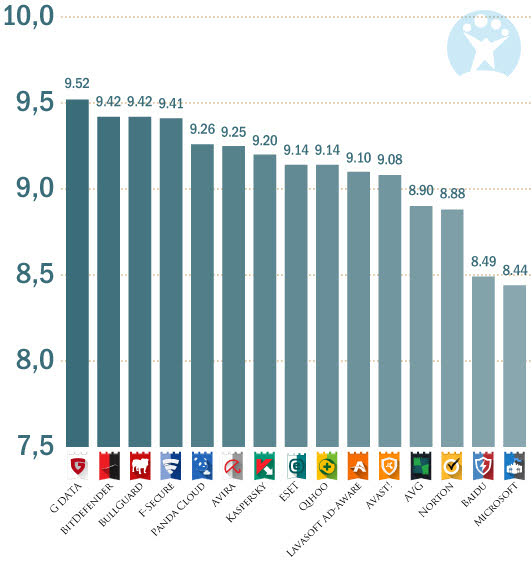 When you assess the programs only on system performance, the results give yet another picture. The top 3 here are ESET, Norton, and the Chinese newcomer Baidu. The programs with the highest detection rates, G Data and BitDefender, only occupy the last places on this test.

This illustrates the actual price of safety: the more thoroughly a software protects your system from threats, the more computing power is needed. According to this formula, Microsoft should rank first in our performance tests. The free programs (Windows Security Essentials and Windows Defender), however, only achieve middle positions in the ranks. 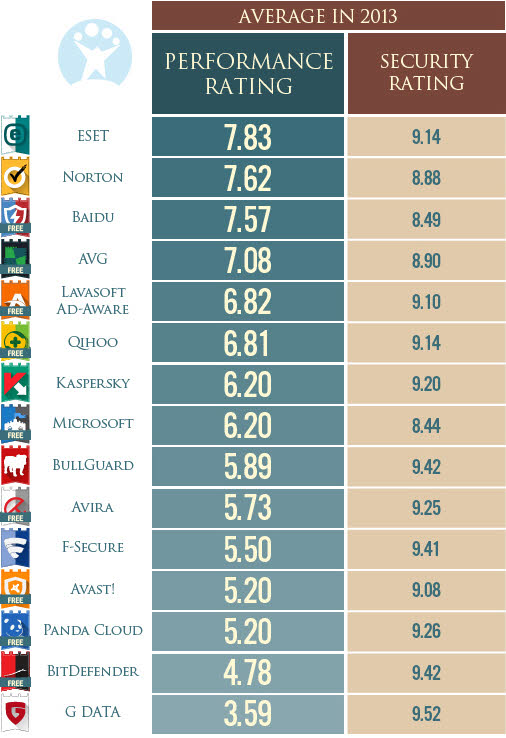 Our Softonic performance rating assesses memory and CPU requirements of the shields as well as the scans. In addition, we take into account how much the shields of the respective antivirus software slowed down our system test. To this end, we extracted an example, a large encrypted ZIP file, and measured the time required to work on it. 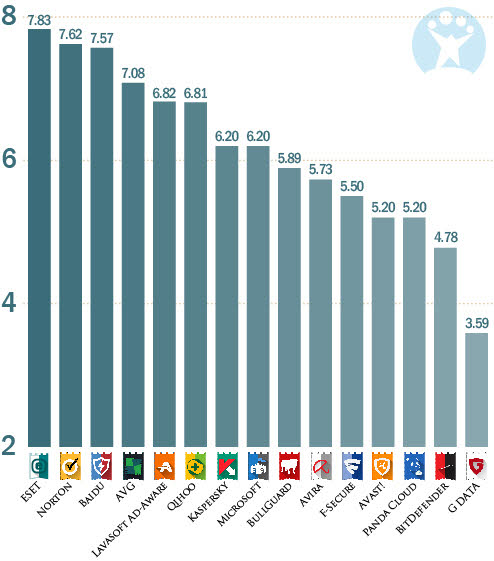 Not every system is identical and the demands of users are different. That’s why this year, we chose a number of winners in addition to our three overall winners Norton, ESET and Kaspersky:

G Data: the strongest antivirus of the year

As shown above, G Data achieved the highest recognition rates over a long period of time. The table below illustrates how well G Data detects viruses over a long-term comparison with the second and third placed software packages in this category – Bitdefender and BullGuard.

There wasn’t a single test run since 2011 in which G Data admitted defeat to its two rivals, and in the last test from November, G Data performed particularly well (the data gaps only occur if the product didn’t participate in that round). 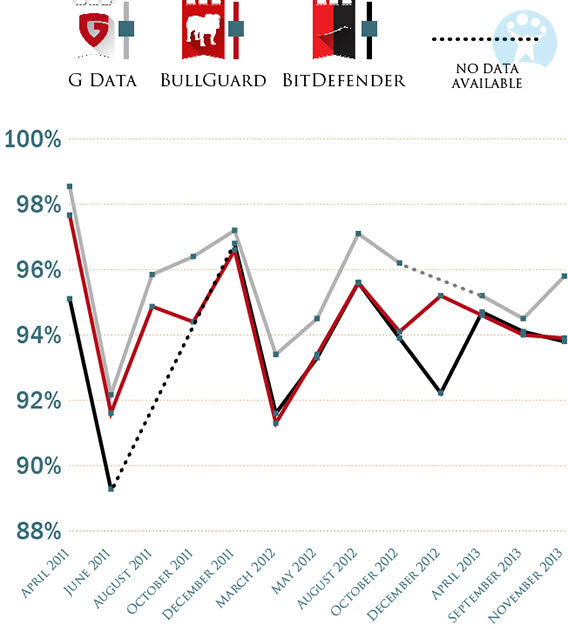 ESET: the fastest antivirus of the year

Our award for the best system performance this year goes to ESET. The runner-up in the overall category is the only software to nab two prizes.

A long-term comparison with G Data and Kaspersky products illustrates the impressive differences: up until October 2011, ESET was ​​always on top, and when compared with other programs, the results didn’t vary as much, which shows consistency. Since October 2012, ESET has always achieved a performance score of eight. 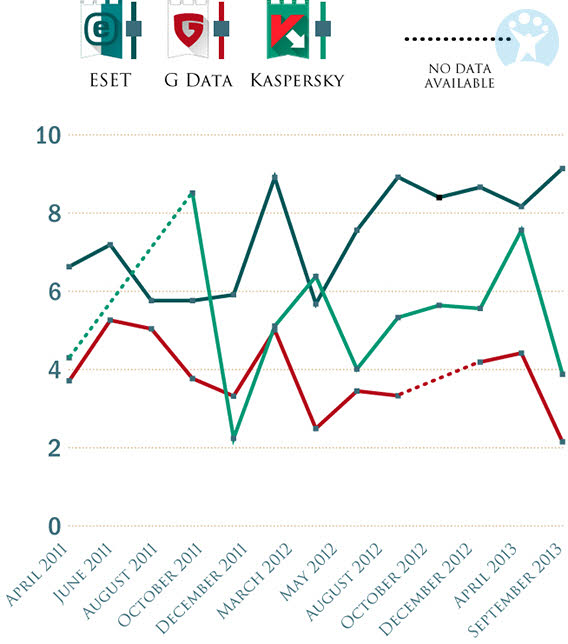 Avast!: The most complete free solution

Avast! gets our extra prize this year for its free version Avast! Free Antivirus. It may only reach the middle of the rankings in our overall comparison, but there’s no other free anti-virus software which comes with such an extensive package of features and functions.

Avast! is particularly popular with Softonic users. No other anti-virus software has been downloaded as often. The visually attractive and tidy interface is certainly one reason for this. 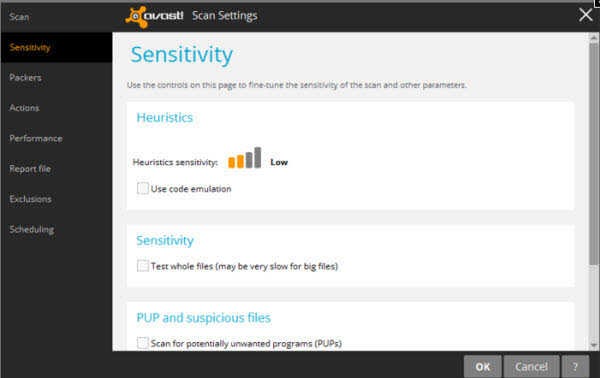 Baidu! Antivirus: the most promising antivirus

The free software Baidu Antivirus is our most promising antivirus of the year. With its new product, the Chinese search giant Baidu provides an excellent product in the antivirus industry. In our initial tests, the software showed better detection rates than Microsoft, and grabbed hold of third place in the system performance category.

Baidu combines its virus protection with German scan technology from Avira. In addition to its own protection technique, you can also use the Avira engine. How well Baidu performs long-term is yet to be seen, however with this offering especially popular in China, the results have already been very impressive. As a free product, Baidu also enters into direct competition with Avast!, AVG, and Avira. 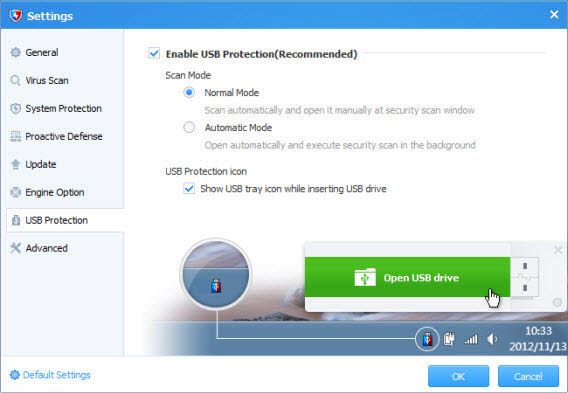 Microsoft: the disappointment of the year

No product has disappointmented as much this year as Microsoft Windows Defender. What was known up until Windows 7 as Microsoft Security Essentials has become an integral part of Windows 8.1. And as our tests show, it slows down the system considerably.

If we replace it with any other free solution, this makes for noticeably higher system performance. Although Microsoft ends up scoring in midrange in our performance rating, this is really only due to the relatively fast scan engine. Looking at the quality of real-time protection, it’s a very different picture.

This is illustrated by the results of our Unzip tests. Here, we extract a very large encrypted ZIP file and measure the time required to scan with the respective anti-virus software. With Microsoft Windows Defender, the process took two and a half times longer than it did for Norton, Kaspersky, Avira, or Baidu on the same test system.

And Microsoft can’t even dazzle with particularly high detection rates. As shown above, Microsoft Scanner was in last place in our test. 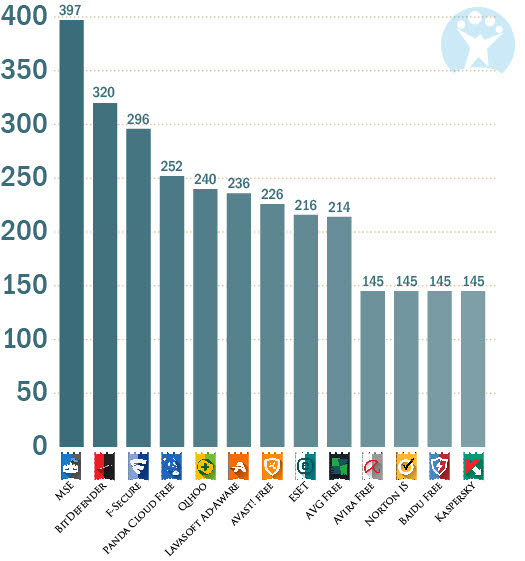 Based on our results, you can easily choose a suitable antivirus software product to suit your needs. One thing our overall competition makes clear is that this year, the commercial providers are ahead of the free programs by the narrowest of margins. If you’re willing to spend money, Norton, ESET and Kaspersky are particularly good choices.

For comparison: Our comparative tests of 2012

Have you found your favorite program? You’ll find all the downloads here!

A HomePod arrives earlier than expected to a customer