New app gives you the power to fight modern-day slavery

It is not something that sounds like a modern-day problem, but slavery is still very much an issue around the world today. Shockingly, according to the charity anti-slavery.org, there are an estimated 40.3 million people in modern slavery around the world. This is not just happened in far-flung places either. There are an estimated 1.5 million people in slavery in developed economies. That means that modern slavery could be occurring right under your noses, without you even knowing about it.

With this in mind, and to mark #WorldDayAgainstTrafficking, a leading anti-slavery charity called Unseen is working hard to educate everyday people like you and me about how to spot signs of labor exploitation. Unseen’s latest initiative is a brand new app, which launches today and is designed to show information about modern-day slavery in a number of contexts.

Using visual guides like infographics and engaging bullet points the Unseen app will give users specific details about what they may see, including signs of physical abuse, should they be witnessing a  case of modern-day slavery. If users think they are witnessing a victim of labor exploitation they can report it using a form found in the app. 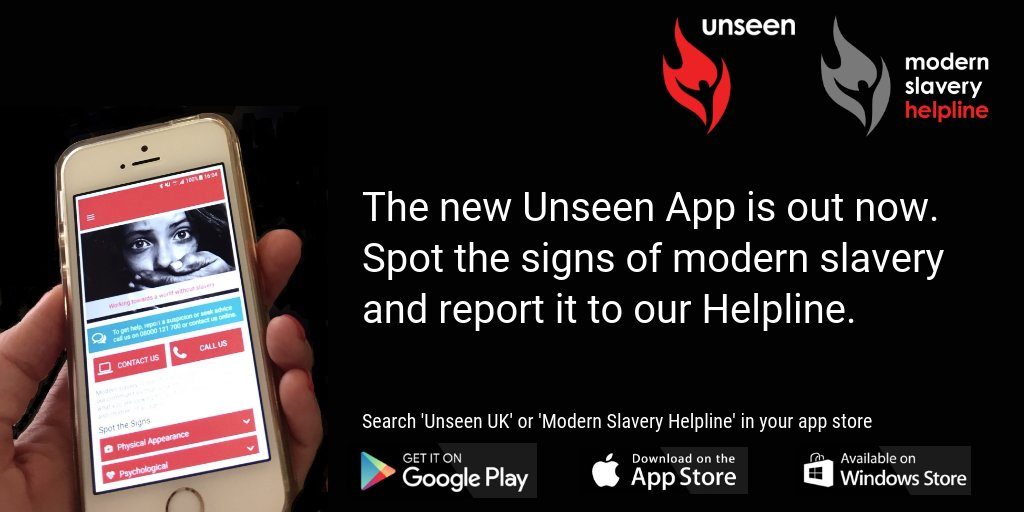 Unseen developed an anti-slavery hotline back in 2016, which can also be used to report worrying signs of malpractice. That helpline has seen constant growth in the number of incidents reported, although prosecutions remain low. The new educational app could go a long way to helping people spot cases more successfully and help bring more gangmasters and human traffickers to justice.

Volunteers are Teaming up with Robots to Fight Slavery from Space

The new app offers real hope in the battle against this insidious problem that hides in plain sight. Speaking to the Guardian, the UK’s Association of Police and Crime Commissioners national lead for human trafficking and modern slavery, Mark Burns-Williamson said:

“I have helped develop a similar app in West Yorkshire around hate crime and know it works. We all have a responsibility to take action…”

The new Unseen app will be available later today in all of the main app stores. Even though the focus of the Unseen anti-slavery app is the UK, it can still serve as an educational tool for users all around the world. If you can get your hands on it, give it a try. You never know what it could mean to somebody if you have a hand in freeing them from slavery.

How to Close Doors in Among Us in 3 Fast Steps