It’s the news many video editors and Final Cut Pro fans have been eagerly awaiting – the release of Final Cut Pro X. Final Cut Pro X is available today for $299.99 from the Mac App Store along with Motion 5 and Compressor 4 for a very reasonable $49.99 each. 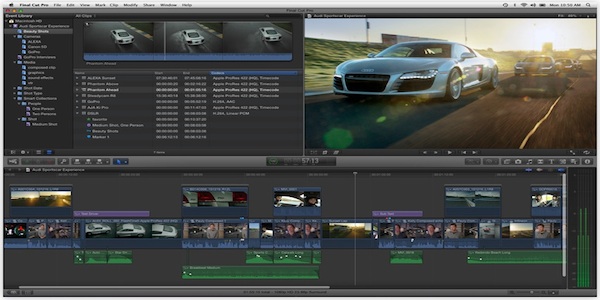 Apple claim that the new Final Cut Pro X “reinvents” video editing with a new Magnetic Timeline which lets you edit on a flexible, trackless canvas and Content Auto-Analysis that categorizes your content upon import by shot type, media and people. And it means less waiting around for rendering because Final Cut Pro X now supports background rendering while you get on with editing.

Final Cut Pro X is built for 64-bit Macs and requires an Intel Core 2 Duo processor or above, 2GB+ of memory and an OpenCL-compatible graphics system with at least 256MB of memory. It will only work on OS X 10.6.7+.

This is a re-write of Final Cut from the bottom-up and is a must-try for any serious Final Cut video editor. The screenshots released by Apple make it look increasingly like iMovie, although that’s not necessarily a bad thing. iMovie is a great video editor, but it is way too fussy and puny so Final Cut Pro X may well be the happy middle ground.

Unfortunately, there doesn’t seem to be a trial version as yet, but at ¢299, it’s very competitively priced.