Apps to help you find and read comic books 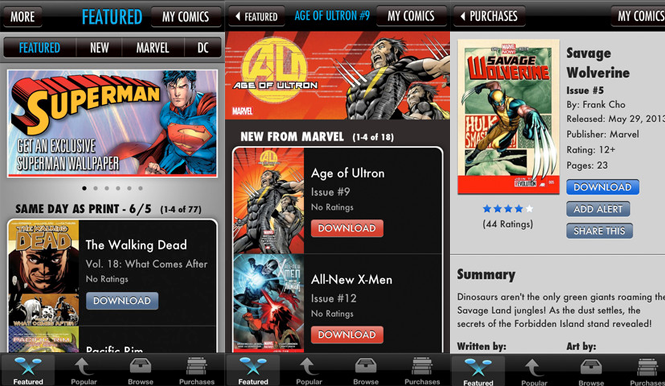 Comic-con took place during this last week in San Diego and many major comic book publishers updated their mobile apps. Some of the changes were superficial or minor, while others were overhauls to make the browsing experience better and solve major bugs. Overall each of them offer ways to purchase digital comics or acquire a select of free ones, making it very handy to have a comic book collection on the go. Whether you’re into DC’s New 52, Marvel Now, Image’s The Walking Dead, or another brand we’ll show you how to make the best of digital comic apps for your Android and iOS devices.

A good number of comic book store apps use Comixology as their backbone, having virtually the same interface and feel. Marvel, DC, and Image comics all have a Comixology app on iOS, while Marvel and DC also have one on Android as well. Before going into each publisher’s individual app, it’s worth checking out the main Comixology app. It’s content includes the mentioned publishers and access to other productions such as manga. 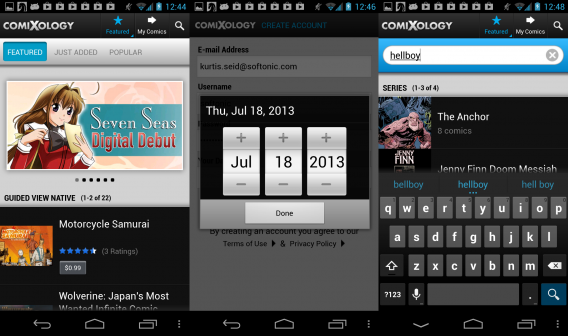 The main focus of Comixology is the purchase of comics or the discovery of free ones. From the main page tabs will allow browsing of featured, popular, and new releases. On the upper is a magnifying glass icon that allows for searches of specific titles, characters, publishers, and authors. 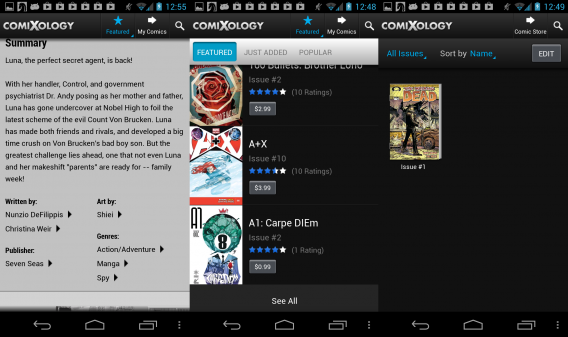 Before downloading any comics, you will need to create a Comixology account. Doing so will allow you to also access the content of the DC and Image apps, but a separate Marvel account is required for their corresponding app. Comics are listed out, allowing quick purchase and download, or you can tap on the title for a page containing more details. This expanded page includes several sample images, a summery, links to writers/artist and genres, the ability to rate the comic, and even share to social media such as Facebook. 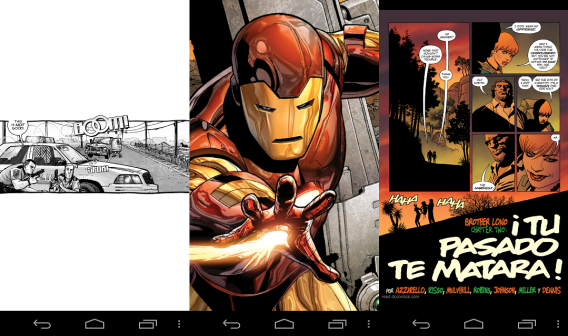 Once a comic is downloaded it can be viewed in the “My Comics” tab at the top. The comics can be sorted by issue, series, name, author, and publisher. By default a comic is shown in a dynamic and letterbox view, presenting individual panels with some minor animations to help direct focus and make the experience more lively. However, at any time the comic can be pinched or zoomed to see the entire comic page. 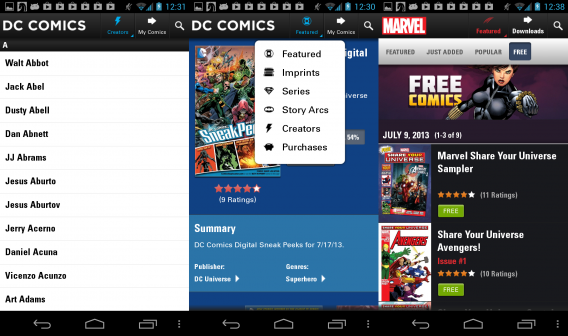 Marvel, DC, and Image have their own version of the Comixology app that only contains their library of content. They aren’t identical clones, though. For example the DC version allows even more browsing options including direct browsing of imprints, series, story arcs, and creators. The Image version likewise has an emphasis on browsing by story arcs and creators, and adds in a button to quickly check all of your purchases, even if they are currently not downloaded to your library. 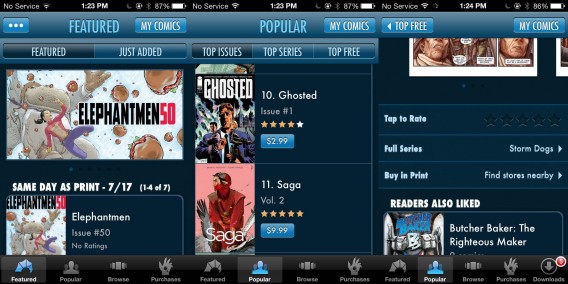 The Marvel version of the app has a greater emphasis on pointing you towards free content, sharing on social media, and quickly accessing the app’s setting menu. This is more predominate in Marvel’s case, as they have a separate Marvel Unlimited app that doesn’t work as well.

Marvel has a secondary app designed for their Unlimited subscribers. This one does not use the Comixology design, making it much harder to navigate. To even view free content requires a new account, and most of the content is stripped if you don’t opt into a paid subscription. 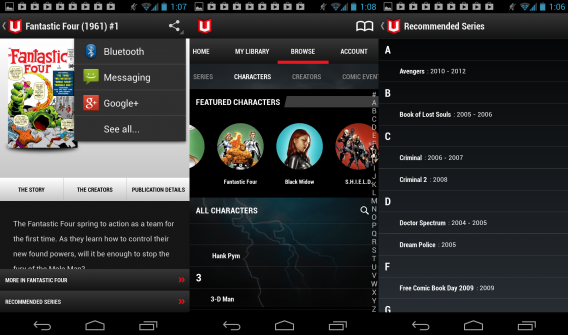 Navigating for specific comics is a little hard, with a jumble of letters listed out on the right and series first being listed but expand with image previews upon tapping. The nice addition at least is that you can browse for items related to comic conventions, such as Comic-con and other events. 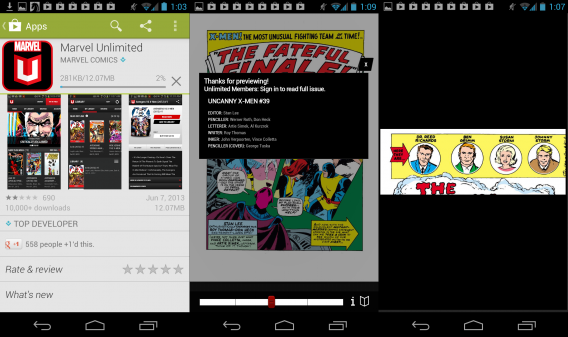 The Unlimited app’s dynamic view does a worse job of highlighting important action in the comic, though its navigation bar makes it very simple and fast to swipe between pages. We ran into constant minor bugs such as random logouts, slowdown, and occasional crashing. As some users lamented in the Google Play Store, Marvel should really make the Marvel Unlimited app function more like their Comixology counterpart.

Dark Horse Comics has their own unique app. There is a larger emphasis on big banners for featured and bestselling comics, these take up a lot of room, requiring swiping to see what you’re really looking at. When you tap on a comic title it leads to a simple white and black page with a short summery and a list of creators. These credits don’t link to more of their work, and the lower half of the app is obstructed by the glaring purchase button. 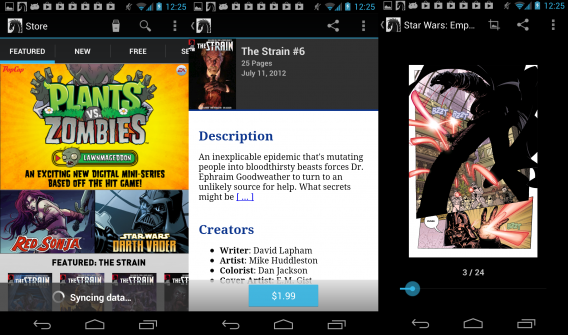 Viewing a comic on the Dark Horse app is less exciting than with Comixology. You can zoom in and out, but the page quickly snaps back into a medium view, and there are no engaging animations to help guide the story; the page just sits there mundanely.

A reason for multiple apps?

At the end of the day it seems better to just stick with the primary Comixology app, as it allows access to all the big name publishers and even smaller and foreign labels. The separate DC, Marvel, and Image apps seem better suited for diehard fans who only follow a particular company, making it an odd fit to someone who wants to discovery something new. The biggest thing to take away is that Comixology also functions reliably, something that the Marvel Unlimited app still needs updates to fix. If you’re a long time comic reader, or just want a few issues on your device, there is a good selection.

What about you? Do you read comic books on your mobile device? Do you use the listed apps, or is there another that’s you’re favorite?