Try out a few of these legendary music biopics!

Personally, we believe there’s a lot to experience, learn, and enjoy in the tales of great creators. And among famous artists, we have a soft spot for the subcategory of music superstars! With a bit of added Hollywood flair, these films spin amazing tales about real people whose existences were verifiably extraordinary.

A Star is Born

The title “A Star is Born” has been used many times over the years: the original came out in 1937, then three remakes landed in 1954, 1976, and 2018. Every version follows the fictional tale of an aspiring female musician who is discovered by a guy who eventually succumbs to substance abuse as the starlet’s fame whisks her away. We should now mention:

Yes, the 2018 version is the best! That’s the one we’re talking about.

The familiar tale plays out better than ever thanks to emotionally gripping performances by Lady Gaga and Bradley Cooper. If you’re not a fan of bittersweet tales, this may not be for you. But if you enjoy stories with so much relatability, depth, and humanity it hurts, watch this!

A Star Is Born

We’re not sure if Get On Up started the tradition of beginning a musical biopic with a musician walking toward the stage with people chanting their name, but it certainly killed it! The movie begins and ends with James Brown walking down a hallway to his new performance, and the scenes between are meant to be his memories playing out beforehand.

Rather than telling events in order, the film explores multiple themes through James Brown’s perception: loving a musician, band relationships (prepare for more of this theme), childhood abuse, race relations, and more.

Oh, and if you were wondering… Chadwick Boseman plays James Brown. Yep, Black Panther! Dude’s got an excellent range of acting ability.

We love Queen! It will forever be one of our favorite bands, and the movie only fell so low because the article has no order whatsoever.

The movie focuses on Freddie Mercury, the lead singer of Queen whose visionary songwriting led to such amazing songs as “Bohemian Rhapsody,” which still sounds unlike any other song out there.

Unreleased Freddie Mercury song will give you chills

When he wasn’t making music, Freddie deals with drugs, souring band relationships, and his the cultural ramifications of his sexual preferences.

[Spoilers?] If you know the story of Queen, you won’t be surprised that Freddie’s contraction of AIDS leads to his death. Luckily, the movie ends on a mostly happy note, but still… why do so many of these movies have to  include a sorrowful farewell?

Elton John rose to stardom like many others: in the face of drugs, pressure to conform to cultural norms, and resistance from the band members that he left behind on the road to stardom.

Unlike others, however, Elton John’s story culminates in the total, absolute acceptance of his own personal flair on a level so admirable, you may just buy an eclectically colored bird suit when you’re finished watching the movie. Never say never, friends.

Straight Outta Compton is a stunning and powerful biopic that focuses on three artists from South LA – Eazy-E, Dr. Dre, and Ice Cube – as they forge their futures in one of the most dangerous cities in America.

When the trio forms the music label N.W.A., their “gangster rap” music sparks controversy on all sides for its use of profanity and violent themes (especially against police officers). Under the pressure, they deal with bad managers, violence, and the loss of friends.

If nothing else will convince you to watch this movie, see it because it started the legendary string of “Straight Outta…” memes: 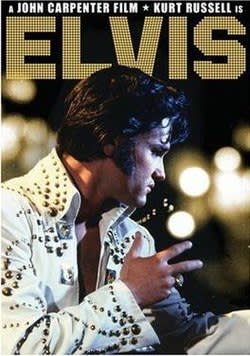 Introducing: the king of rock and roll!

This movie was released two years after the death of Elvis Presley, and sadly does not cover his death, it ends before. Sad, but not surprising: director John Carpenter intended to highlight a great musician he cared about in order to explore a film genre he hadn’t yet tried.

Unlike the other movies, this one feels more like a biography and less akin to a story; there’s not much of an arc over the beginning, middle, and end. Still, in spite of that, Elvis’s life through music, enlistment, movies, and more has a lot to offer.

The movie follows Antonio Salieri, a decent composer who desperately prays to God for greatness, believing music to be a love letter to the almighty. Mozart, a depraved musical prodigy, shatters his religious paradigm and sends him on a quest to destroy the composing genius, his friend and greatest enemy, in any way he can.

If that sounds like an interesting story, that’s because it 100% is.

Bonus: This is Spinal Tap

If you weren’t aware that the phrase “turn it up to 11” comes from this movie, you need to educate yourself.

This very, very real documentary biopic (so real) follows the legendary British rock band Spinal Tap on their perilous road to glory. If you like idiot savants, bad hairdos, meddling girlfriends, outrageous outfits, band members disappearing, big bottoms, managers laying down the law, and amps that go up to 11, then have we’ve got a show for you…

11 facts about ‘This is Spinal Tap’

We live our lives with musical inputs from our phones, stores, laptops, and more. We believe it’s important or, at the very least, highly entertaining to examine the lives and times of the creators!

How to activate dark mode in WhatsApp and Messenger