Move over Spotify, you’re not the only podcast host around here.

Some of our favorite YouTube content creators and celebrities have decided to deviate from their usual work, and create podcasts. Just like how there seems to be a YouTube video for all of your needs, there seems to be a podcast on YouTube for all interests.

For this list, we took a look at all YouTube podcasts released by the creators. Although these podcasts might be available on other platforms, they can also be listened to on YouTube. Also, we are not considering podcasts that have been uploaded by fans or outsiders.

Let’s get this out of the way: no, a YouTube video is technically not a podcast. By definition, a podcast is an audio file; there is no video. However, these creators refer to themselves as podcasts, and we aren’t going to argue with them or their millions of subscribers. 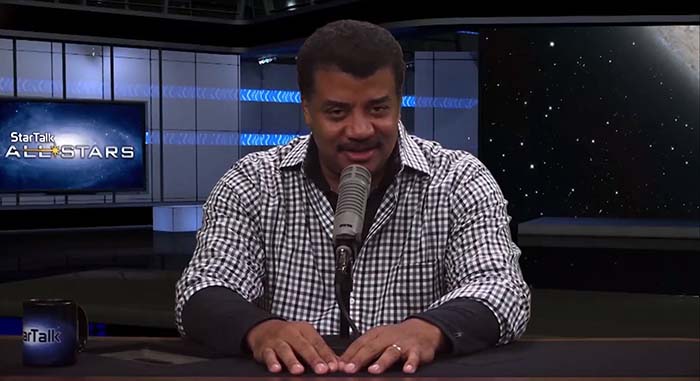 Even some of Neil Degrasse Tyson’s fans sometimes have an issue making it through his books. He’s quite knowledgable, but his charisma and entertainment value don’t quite shine through.

However, Tyson’s podcast StarTalk is filled with answers to many of the universe’s mysteries and still manages to be funny.

The channel does not have many full episodes of the podcast. For those, you will need to go to their website. However, the channel does have interviews, segments from the podcasts, and funny clips of Tyson being Tyson.

How to record a podcast with good sound quality

The podcast, as you might imagine, is also based around film discussion. The three hosts are known for being hilarious and also very sarcastic. The three banter about movies similarly to Gene Siskel and Roger Ebert.

If you’re a film lover, then you’ll love these guys. Not only will they make you laugh, but they’ll make you appreciate quality filmmaking so much more. 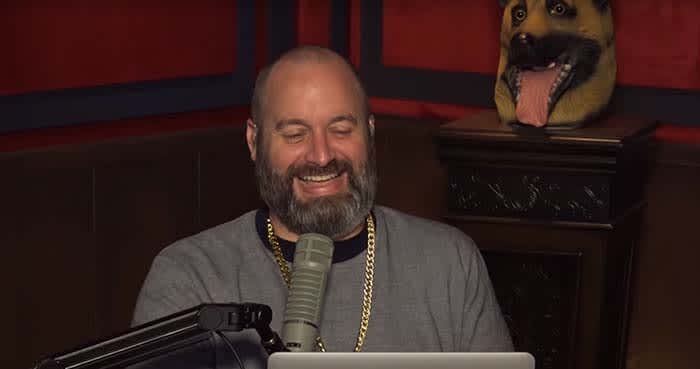 If you aren’t familiar with Tom Segura, go watch one of his Netflix specials right now. He is easily one of the funniest comedians in the game right now.

Are you back? Hilarious, right?

Your Mom’s House is hosted by Segura and his wife and comedienne Christina Pazsitzky. On the podcast, they interview other people in the comedy industry as well as entertainers.

If you want something funny to help get you through your work day, Your Mom’s House might just be the answer. 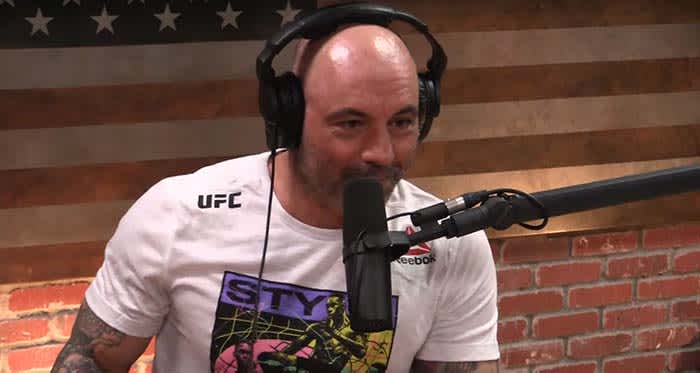 Prior to his podcast, Joe Rogan had a few claims to fame. He was the host of “Fear Factor,” a show where contestants had to conquer their fears. He’s a commentator for UFC. He even has done stand-up and has specials on Netflix.

However, what most people seem to know him from nowadays is probably his podcast, “Joe Rogan Experience.” On the podcast, Rogan invites celebrities for interviews, or just to smoke a joint like how he did with Elon Musk.

One of the best (or worst) parts of the podcast is that Rogan is not afraid to bring on controversial guests such as Alex Jones or Ben Shapiro. He’ll ask hard questions on controversial issues, and his fans love him for that. 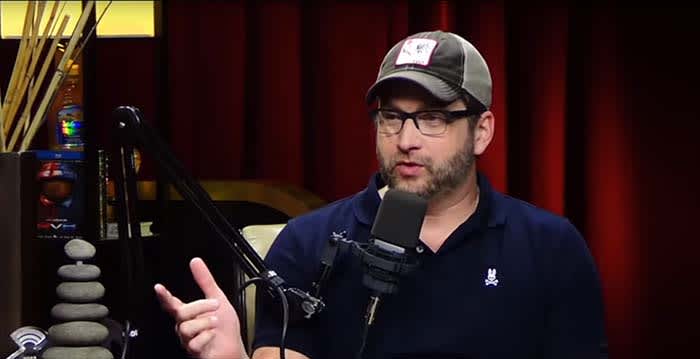 If you type in “video game podcast” on YouTube, you’re gonna get a LOT of different podcasts. These range from okay, to pretty cringe-worthy.

The problem is a lot of these podcasters aren’t established names who have already made a name for themselves on YouTube or in the entertainment business in general. The RT Podcast is the definitive podcast for video games.

For those that have been living under a rock, Rooster Teeth is a popular YouTube channel that does let’s plays and other video game content. They also have a longrunning series called “Red vs. Blue,” which is a comedy that takes place in the Halo universe.

On the podcast, the team at Rooster Teeth talks about video games, internet trends, and also random internet hilariousness.

If you’re a fan of Rooster Teeth, the RT Podcast will not disappoint you. 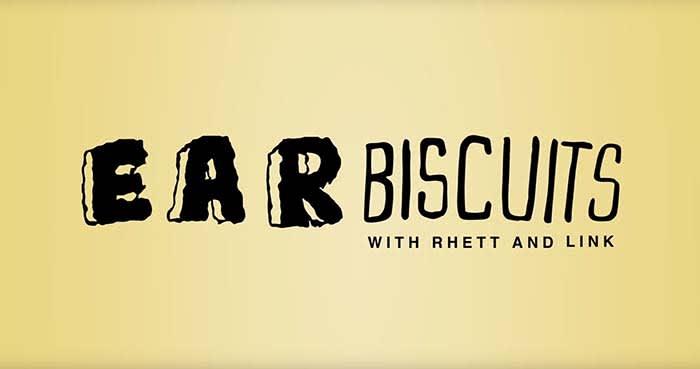 Easily one of the best channels on all of YouTube is Good Mythical Morning.

GMM is essentially the talk show of the internet. Rhett and Link, the hosts, play games, eat gross food, and put their bodies through the oddest conditions.

So what’s Ear Biscuits then?

Ear Biscuits is the podcast hosted by Rhett and Link. Rather than talking about current events, celebrity gossip, or hosting interviews, the pair instead talk about everyday life.

Has your family just suffered a loss? They talk about that. Do you often procrastinate? They go into that as well. Along with the mysteries of the universe, do you find yourself debating the comedic value of farts? Well, they talk about that too.

On GMM, Rhett and Link don’t often go into controversial topics. You won’t hear a lot of social or political issues come up. However, the two are surprisingly much more vulnerable on Ear Biscuits.

If you’re a fan of GMM, then you’ll really love Ear Biscuits. If you’re not, there is still a lot of quality content for you to enjoy on the podcast. 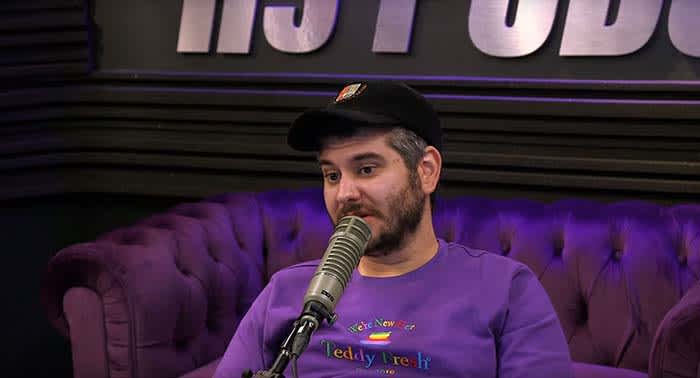 Ethan Klein is not the greatest host.

He often doesn’t stay on topic. He often loses control of interviews. Also, things rarely go according to plan. With that being said, you’re probably wondering how on Earth the H3 Podcast took the number 1 spot.

Ethan and Hila Klein create a very casual atmosphere where guests go into personal detail that we simply don’t get to hear elsewhere.

The husband and wife team do have shows just featuring the two of them, but they mainly do episodes with guests from YouTube and beyond. Heck, they even invite YouTubers they dislike on the podcast:

If you’re a fan of H3H3 Productions and their videos, their podcast definitely has something for you.

Look, if you’re a fan of true crime podcasts, then you need to listen to My Favorite Murder on Spotify or Stitcher. YouTube simply can’t compete in that area and some others.

However, both celebrities and famous YouTube content creators have some incredible podcasts on the platform. Happy listening!

How to add your podcast to iTunes ►

How to submit your podcast to Stitcher ►

The 4 best apps for listening to podcasts ►

The Negative Effects of Heavy Social Media Use