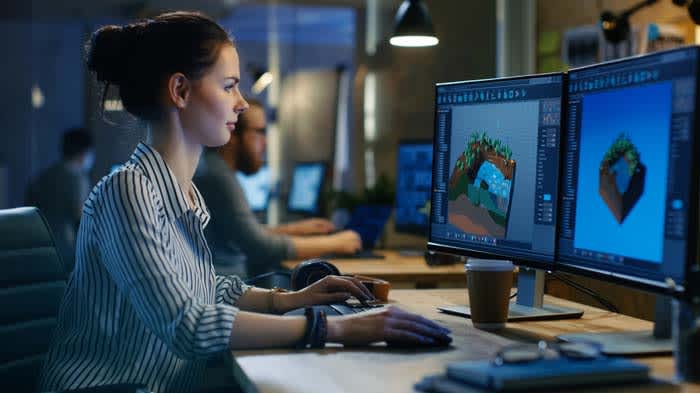 Over the past decade, indie games have really taken off as viable alternatives to AAA blockbuster games. They are often smaller projects that focus on finely tuned, specific gameplay mechanics. This has led to excellent games such as Superhot, Hotline Miami, and Celeste.

Games like Undertale and Braid have shown that some of the most beautiful, gut-wrenching stories in gaming can come out of small indie teams. Platforms like Steam, the Nintendo eShop, and the App Store/Google Play Store have been filled with hundreds of excellent indie titles. These games feature innovative mechanics and creative storytelling.

We live in a golden age of indie gaming, and if you’re feeling inspired to create your own, here are a few programs that can help get you started:

Nearly every indie game dev will tell you that the best program to make indie games on is Unity. An industry staple for years, Unity is one of the most feature-complete and widely used game development programs out there.

Unity offers both free and premium versions, with the free version being feature-complete. There is support for iOS, Android, Windows, Xbox One, PlayStation 4, Nintendo Switch, and more. You should have no problem porting your game to your platform(s) of choice.

Unity uses Javascript or C# for scripting instead of a proprietary language, allowing programmers to transfer over their skills in those common languages. The incredible robustness of Unity allows for users to create both 3D and 2D games, with plenty of powerful tools for both kinds of games. You can preview your games within the editor, which saves enormous amounts of time and headaches. This is because you don’t need to compile and run the game every time you want to test something.

Perhaps the greatest strength of Unity is the huge online community surrounding it. There is an expansive asset store that allows artistically-challenged developers to create games with pre-made assets. Also, there are thousands of online tutorials, videos, and forum posts made by community members that cover pretty much any topic that could possibly pop up.

The number of games made using Unity nowadays would be too much to list, and the software isn’t going anywhere any time soon.

Made for 2D game development, Game Maker Studio 2 is both powerful and easy to use. Like Unity, there is a feature-complete free version, though you must pay to publish your game on different platforms.

Game Maker Studio 2 is unique in that you do not need any coding experience to make your game. Though you can code traditionally in GMS2 (using the program’s proprietary language), the program also includes a drag and drop feature. This feature helps you visualize and simplify coding without sacrificing any of the depth. This drag and drop system makes Game Maker Studio 2 the program of choice for programming beginners, as it allows users to learn as they go along. Like Unity, GMS2 has an asset store that has premade game engines, features, and artistic assets.

The ease of use and versatility of Game Maker Studio 2 is unmatched when it comes to 2D games. Some of the most popular indie games ever, like Hotline Miami and Undertale, were made using the software.

RPG Maker MV is, predictably, a software that allows you to create RPG’s. Ever wanted to make an epic JRPG like Final Fantasy, Dragon Quest, or Earthbound? MV lets you do it with ease.

Like Game Maker Studio 2, it doesn’t require any coding knowledge. MV uses a tile-based interface that allows users to draw locations and tilesets directly into the game world. Users can create turn-based battles that harken back to the golden age of JRPGs.

While the editor may look simple, there are hundreds of fan-made scripts available that you can add to enhance your game. Want to add a Paper Mario-style Action Command system? You can do that. Want to add a Fire Emblem style tactical map? You can do that too. You can even make your game an overhead action RPG like The Legend of Zelda: A Link to the Past. For a program designed to make JRPGs, RPG Maker MV is surprisingly versatile.

The program is available on Steam for the hefty price of $80, though sales are frequent. Fortunately, you can download a free demo directly from the RPG Maker website, or from us:

Design a great one!

Have you used any of these programs? Any important ones we forgot to list? Let us know!

How to Fix Android System Webview in 4 Easy Ways