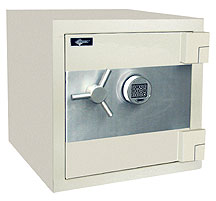 If you’re looking for a secure file protection solution have you ever thought of putting them in a virtual safe? There are several applications out there that act as safes for your most sensitive data. You can also find safes that protect your computer from attack and enable you to carry your data securely from one location to another.

Steganos Safe is one of the most comprehensive out there enabling you to create an encrypted drive with just about anything from hard drives to USB drives and even iPods. You can then read the data on other computers by answering photo based security questions as long as they have the Steganos driver installed. If on the other hand it’s just files or folders you want to protect then Bildsoft Safest is a rock solid solution claiming to use encryption techniques from the US military. Meanwhile, if it’s just passwords that you’re worried about, Keepass Password Safe stores all your passwords in a one-stop highly encrypted safe.

As well as your files and hard drive, you can also protect your general working environment with a safe via SafeSpace. This program works as a kind of “sandbox” by allowing you to open applications and download files in a safe space that won’t do any damage to your PC at all. Finally, the unusually named SafeSex has nothing to do with what you think it does. Rather it allows you to create a virtual notepad in a safe area that nobody but yourself can access for those most intimate or confidential of thoughts and notes.