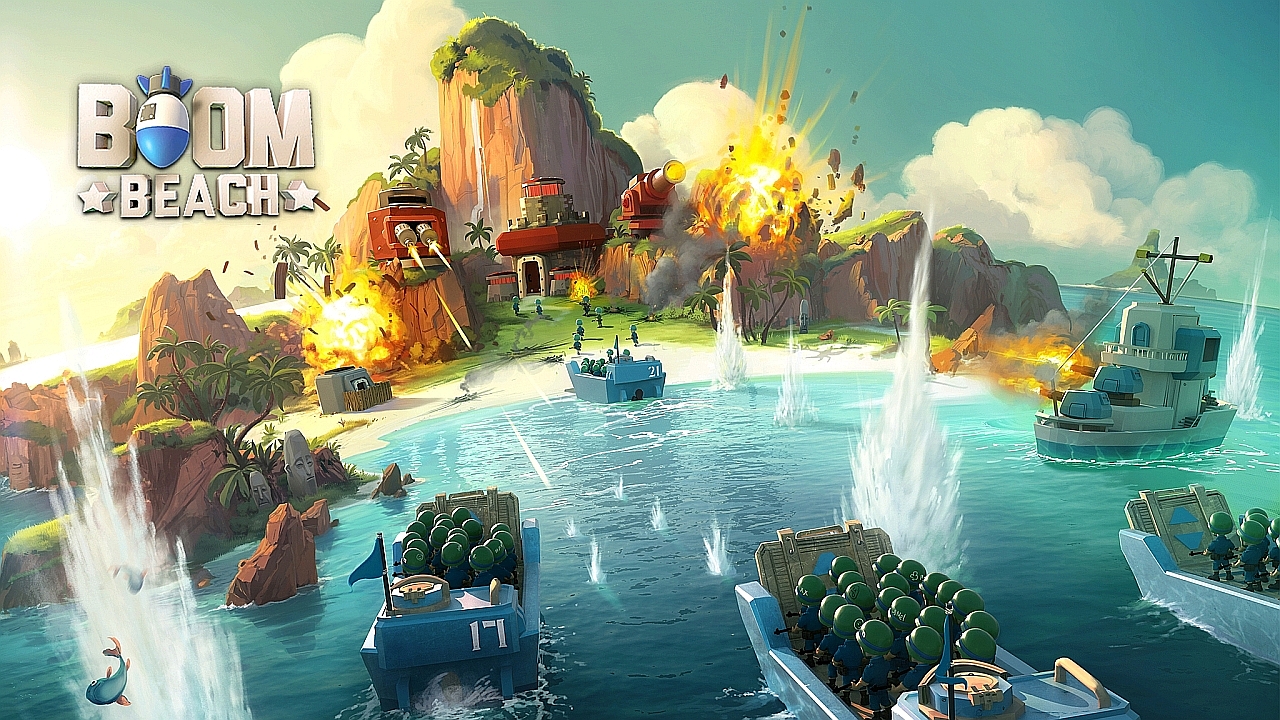 Boom Beach has finally arrived on Android, and its creators Supercell are hoping to recreate the success of its other titles, Clash of Clans and Hay Day, with Boom Beach. It’s already gotten a head start with the iOS version, but chances are that it’ll blow up even bigger now that it’s on Android. If you want to get the most out of the game, there are certain tricks that’ll put you on the right track from the start.

Boom Beach is set on an archipelago of tropical islands. One of these islands is where you’ll set up home base, from which you’ll fight the the sinister Blackguard, who enslaves its islands’ inhabitants.

The key to starting any game, of course, is strategy. Well thought-out tactics at the beginning of the game will give you a huge advantage over your opponents. Below, I’ll tell you what to look for from the beginning in order to start the game off with a huge boom!

You’ll have a stone storeroom, which can be useful for attacking other players, as well as for controlling the island with the computer. You’ll have access to a quarry only once you reach Headquarters in level 7, and at a more advanced level, Boom Beach introduces yet another material, iron, available from level 9 Headquarters.

You can also acquire diamonds throughout the course of the game. Larger quantities can also be purchased with real money at the store, which you can use to reduce construction time, and to replace deficient resources.

Coins are used to pay for soldiers, to expand the reach of radar on the world map, and to further train soldiers, which is done in the Armory. At the beginning of the game, you pay for constructing buildings with trees, followed by stone, and later, iron.

Steady and rapid growth at the beginning of the game is very important, but you need to prioritize; the highest priority in every game of this type should be economic development so that you can finance the development of a military and a government.

At the beginning, you’ll be very focused on securing a supply of raw materials. You can do this by raising buildings which produce coins, wood, and stone to higher levels. But that’s not all. If you retake an island from the hands of the Blackguard, its residents will be sent to you with gratitude, and construction materials.

One small island might not make a difference, but 20-30 definitely will. Unfortunately, the villains of the Blackguard will systematically try to take back the islands. Then, you’ll have little choice but to once again send your soldiers to enemy islands. 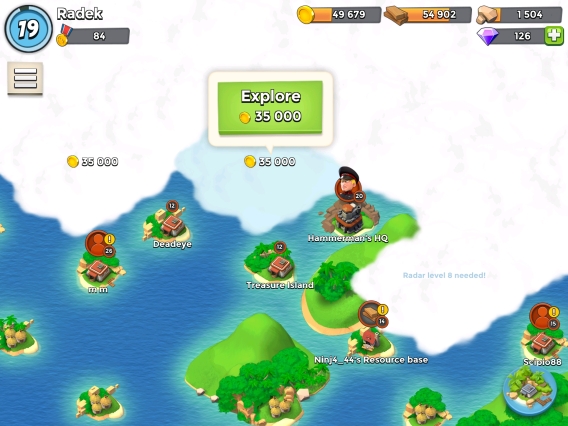 You might pay dearly to discover the world map, but it’s worth it!

A key tip is to keep exploring the world map. Every little piece costs a lot of money, but it’s worth doing because you’ll be able to find a Resource Base, giving you a much larger supply of wood or stone. Unfortunately, the peace won’t last long: other players will try to take it from you.

The more a base of raw materials passes from one person to another, the higher the level of defenses you’ll need. In this case, it may happen that someone takes the resource base and improves their defenses, leaving your expeditionary forces without enough strength to take it back , at least not without raising it to a higher level or increasing headcount. 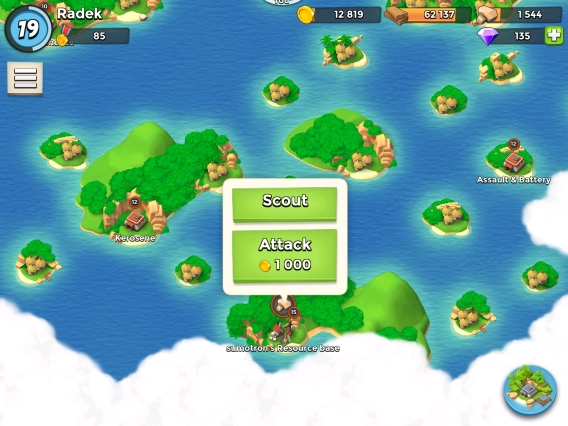 Master the resource base and fight for it tooth and nail

On the same world map where you’ll find the islands that you need to attack, randomly and occasionally you’ll  find boxes with diamonds. It’s worth casually scanning the map to find these treasures. By doing so systematically, you won’t have to buy diamonds at all (or at least if you do, you can buy much less).

In your home base or seized Resource Base, you should remove trees and rocks if you have excess cash. After removing a tree, you will, of course, get the raw “tree” material. The same goes for rocks: remove them to get stone. Not all trees, however, can be removed at once. Older and larger trees can only be cut down once you have your Headquarters at an appropriately high level.

From level 5 Headquarters, you can create a new building– the Sculptor. What does it do? Once you liberate an island from the Blackguard, you’ll start receiving strange crystals. When you collect 7 pieces of the same shape, a sculptor can make a statue of them. Once they’re built, you’ll get bonuses for different stats. 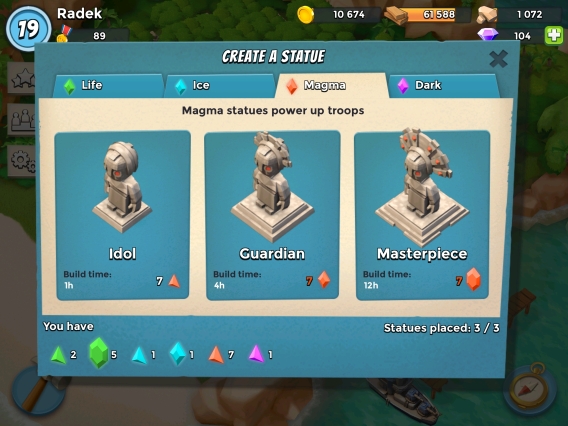 Types of statues and crystals in the game

In the early stages of the game, you’ll only see green crystals (Life), which help increase the production of raw materials. Later, blue crystals (Ice) will appear, and building statues with them will give bonuses to help defend the base. Red crystals (Magma) give bonuses that improve the performance of your soldiers, while purple crystals (Dark) support many other statistics. 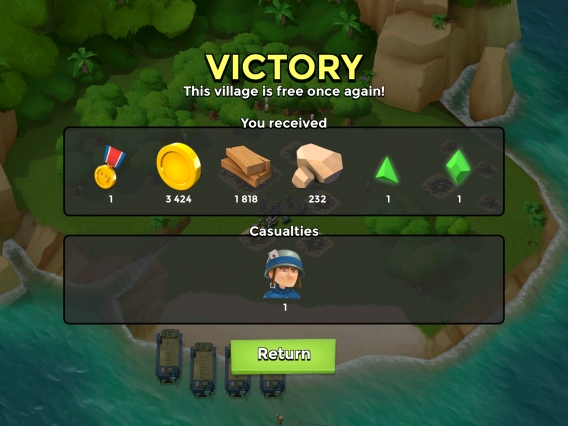 Gains after winning the fight – raw materials and crystals

The game limits the number of statues that you can put in your base to one type, but there is a way around it: overflowing statues will be turned into precious crystals in higher levels.

Headquarters is a key building in Boom Beach. Its destruction by the enemy automatically destroys all the other buildings in the database, giving the opponent victory. In short– protect this building at all costs. Set it in the center of the base, and evenly protect it with machine guns, mortars, and sniper towers. 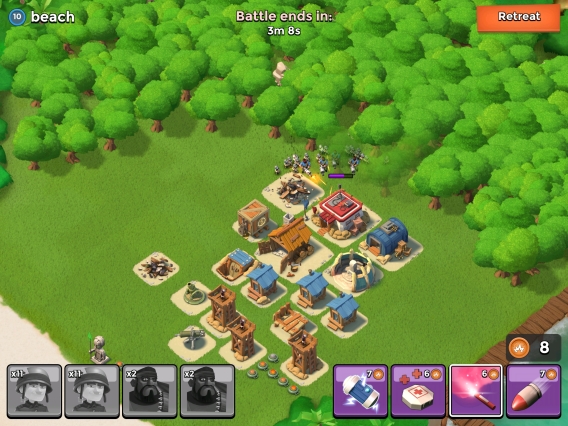 The attacker soldiers suddenly come out of the forest, guided by flares.

Once attacking soldiers land, they’ll move in a straight line to the closet buildings, so it seems logical to set up defenses on the first line, closest to the beach. Using flares can, however, direct the line of attacking soldiers elsewhere. If your defense is concentrated on the beach, for example, it could be easily avoidable and allow for attacks from behind.

Examine the power of defense and its range

Before attacking an island, you can get a sense of its level of defenses. To do so, choose the island and click on Scout, but don’t rely solely on an overview showing enemy fortifications: check every cannon and machine gun turret. Check to see how many points it has and how far it reaches. Then, consider which side you want to land your troops, and which defenses will protect shots from a cannon on the deck of a destroyer docked at the shore. 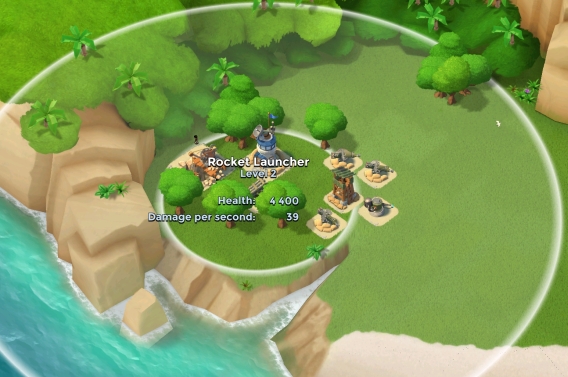 The range of rocket launchers and its points are huge.

Rocket Launchers are powerful defensive tools with a lot of points and a huge range. Sometimes, they’ll hide behind trees in the farthest corner of the base. Before you deal with other towers, you’ll be under non-stop rocket fire. The only way to the Rocket Launchers is to approach it as close as possible.

With the help of flares, you’ll have to set your troops so that they aren’t within firing range of other defense towers. In the first phase of battle, it’s worth releasing a unit that has a lot points– it’ll include a soldier with a giant machine gun.

Soldiers jumping out of the landing craft will go in a straight line to the nearest building, in turn shooting at ordinary buildings or defense towers. To give direction to their actions, it’s worth shooting a flare: marked buildings will immediately become targets for all your troops.

It’s often worth using flares to bypass enemy defenses and attack from the side, where the defense is less concentrated.

During the first attack, you should eliminate the opponent’s defenses, but it may not be worth it to go from one tower to the next sniper machine gun: your arsenal will have some other tricks up its sleeve.

Each attack begins with certain energy points that you can use to fire a cannon, deploy flares, or treat troops. Demolishing simple bases that aren’t shooting at you increases the number of available energy points.

In the end, it’s worth steering your troops in order to maximize the number of energy points to use at the most opportune time.

Get off to a good start

Like Clash of Clans and Hay Day, Boom Beach is a strategic game where getting off to a good start is important for a successful game. Making using of resources, directing troops, and properly protecting your assets are just a few key factors that can help you make the most (and get the furthest) in the game. Finally, Android users can join in on the battle for tropical islands.

If you want more from Supercell, check out how to sync Clash of Clans between Android and iOS devices.