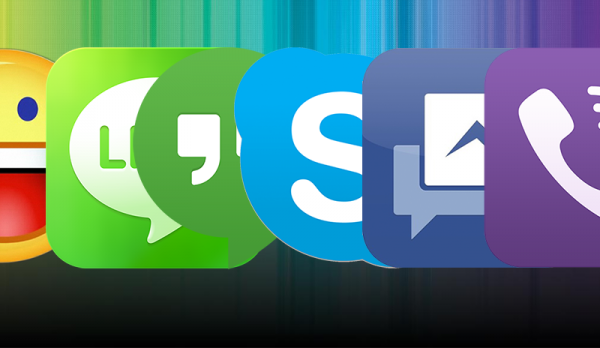 The selection of available chat apps keeps changing: Microsoft has killed Messenger in favor of Skype, Google Hangouts has merged several services into one, and Viber is now on Windows and Mac. With new apps competing alongside old favorites, which one should you be using?

While it’s common to emphasize messaging on phones, we’re instead focusing on messenger apps for Windows. Some of them even allow you to take the conversation from your computer to your mobile device.

We’ll be taking a head-to-head look at the following apps:

A messaging app is useless if none else uses it. The more users on the same service, the more likely your friends will be there. You also won’t need to register for a different competing app (we’ll discuss this in a later section).

Before you can use any of these messaging apps, you will need to register an account. Facebook, Skype, Yahoo! , and Hangouts are all part of larger network, which means you could possibly already have an account. The registration process in all of these networks is rather similar – short, but not very exciting. 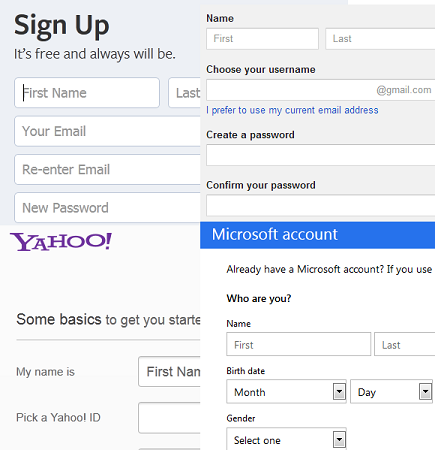 Registration for LINE and Viber is much faster, but you can’t actually do it from Windows. Instead, you need to first sign-up with the mobile version, even if you don’t plan on using those apps.

In the end we are giving best user registration to Hangouts, as creating a Google account is easy, requires very little personal info, and connects to a wide range of services. With the prevalence of Gmail and other services, It’s already likely that you have a Google account.

Ease of use and speed

A good instant messaging program needs to be fluid and easy to use, the people you chat with don’t want to sit around for replies as you fumble with poor interface or slow menus. 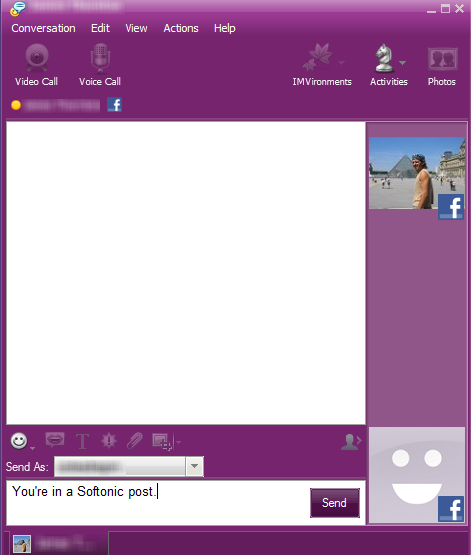 Yahoo! Messenger looks very similar to the older, classic Windows Messenger. Some might find this outdated, while others will see it as nostalgic. The app itself is fast, but the user interface is cluttered with too many distracting buttons all over the place. 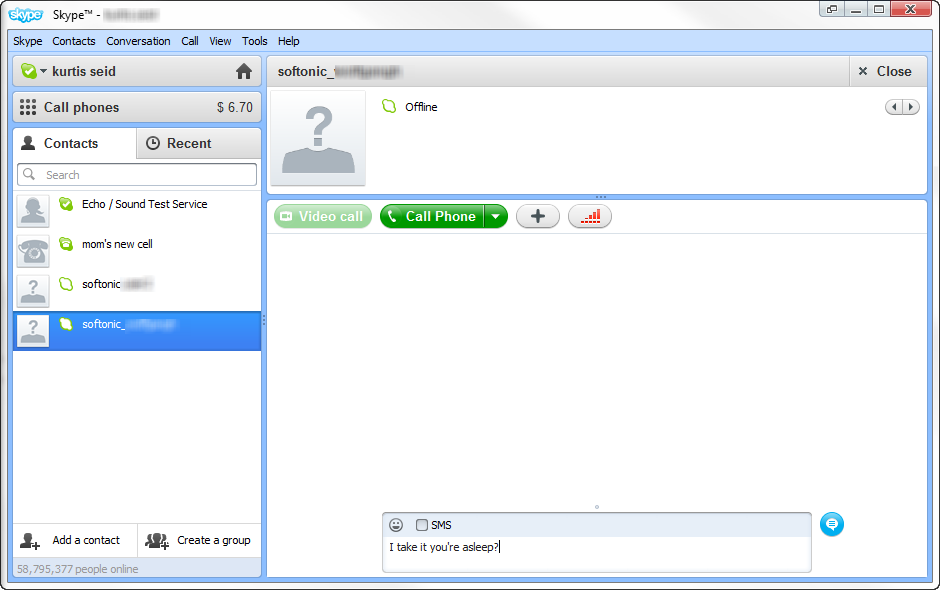 Skype isn’t very fluid, is slow, and filled with too many notifications. It can be a hassle to open and manage conversations, making it a pain and annoyance to use.

The other apps are much light and even simpler to understand. Facebook Messenger, for example, has only one simple feature: it sends instant messages and nothing else. 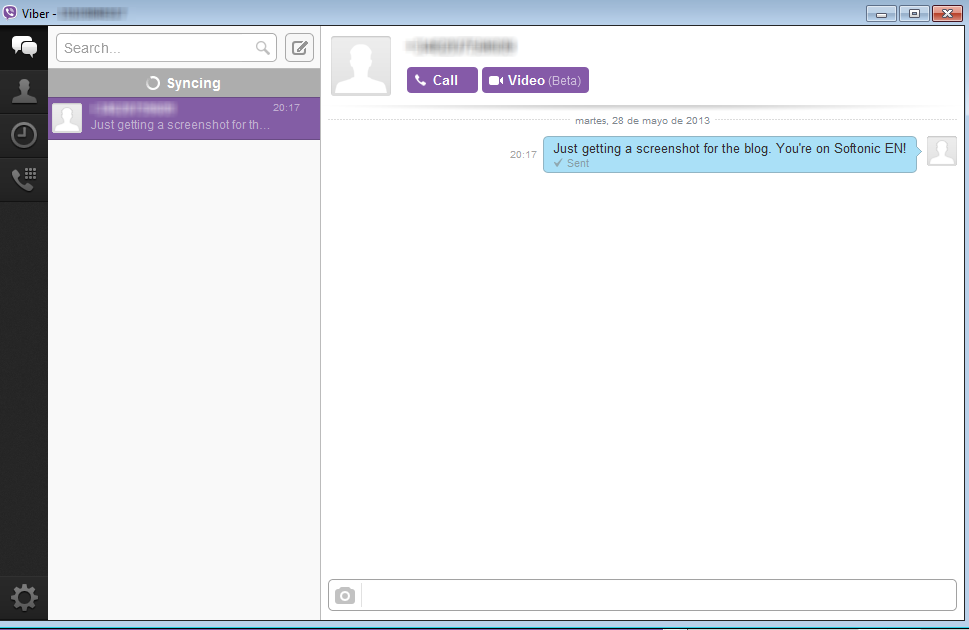 Both Viber and LINE also operate well on Windows. Viber is very fast and agile, while LINE is simple enough that most will find it intuitive. 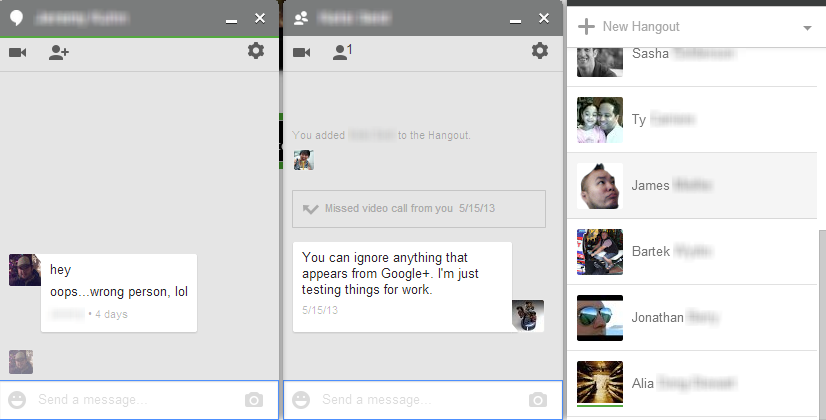 Finally, Hangouts is also very straight forward, although it would be nice if it showed clear user status. It’s quick and responsive, but we’d like it if it was even easier to tell who was idle or offline; the indicators are too subtle right now. This app is better for people familiar with messaging, and less suitable for beginners.

Our pick for speed and ease of use is Facebook Messenger. It is really fast, to the point where it seems nearly impossible (at least hopefully unlikely) to get confused by the nonexistent options.

Ah yes, the purely aesthetic part of an app. While the last section was about the feel of the program, this is more the look of the design, and in many cases the quality of emoticons, emoji, and stickers.

Both Yahoo Messenger and Skype strike out in this category. The interfaces are outdated, feeling like a relic from the dial-up modem era. Yahoo! Messenger may have some emoticons, but not nearly the assortment as their competitors; they are also way too small, and might require zooming in to tell them apart.

Facebook Messenger also isn’t very stimulating, having nearly the same appearance as the other Facebook sidebars. It’s also unfortunate that the neat stickers from mobile versions of Facebook Messenger are not in the Windows version. Instead, you’ll have to rely on old and small emoticons.

Hangouts has s great and large selection of new emoticons. They are expressive and a decent size, which is a great improvement from Gmail’s old emoticons. The interface however is rather plain with its simple grey and white. Hopefully there will be a customization option to add in a little color.

LINE is very pleasing to look at, with clear distinctions between messages sent and received. The main draw of the app is its impressive amount of stickers.

Viber for Windows has a similar interface to LINE, but only a single window is used for contacts and conversations. Unlike the mobile version, Viber for Windows lacks emoticons or stickers, which for the moment makes it a rather boring messenger.

Our winner for appearance is LINE. Its interface is clear, pleasant, and has a huge number of emoticons and stickers. The stickers are continually updated, helping to insure that you’ll never get bored. One drawback, though is that you have to log into the mobile app to manage your collection of stickers.

Most messaging apps allow much more than just text chatting, such as sending files or video calls.

Video calls are a strong point for Skype (which has had the feature from the start), but this feature has been included in Yahoo! Messenger and Hangouts. Viber also have a video call feature, but it is in beta and can only be used between desktop users, not desktop to mobile. 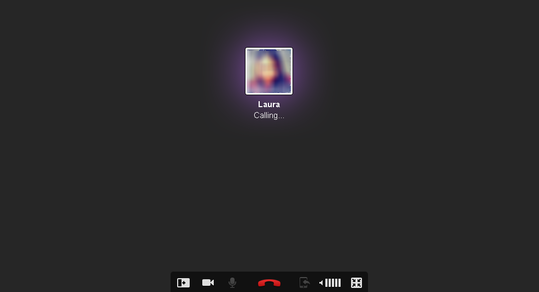 All of the apps that have video calls also support voice calls. Viber and LINE get extra points for being able to seamlessly call mobile users. Facebook Messenger lacks a call feature, even though there is one within the iPhone version.

Facebook Messenger also lacks the ability to send files, which all of the other apps can do. However, Viber and Hangouts is currently limited to only sending pictures.

Further options and screen sharing is available to Skype, Yahoo! Messenger, and Hangouts.

Overall, we decided to give the highest score for additional features to Yahoo! Messenger. It has voice calls, video calls, shared games, and can send files. Many of these features have been rolled out over many years, giving Yahoo! a great advantage.

For our final verdict we rated each app on a scale from 1 to 10 in all previous sections, then assigned different weights to each. For example, number of users only factored in 10%, while speed and ease of use was worth 30%.

The final total was as follows:

Surprisingly, the newcomer Hangouts was the highest with a 7.2. The app is very easy to use, simple, and has a lot of cool features, such as video Hangouts. Although it only won one other category, it is the most balanced package.

This isn’t to say that Hangouts is the flat out best messaging app, it still has a lot of room for many great future improvements. Its success depends on how all of these apps evolve with time. Viber and LINE for instance are being updated rapidly with new developments and features. We hope that all of these apps continue to build more options and have closer integration with Windows.

What do you think is the best messaging app for Windows?

The Best Strategy Games for Android