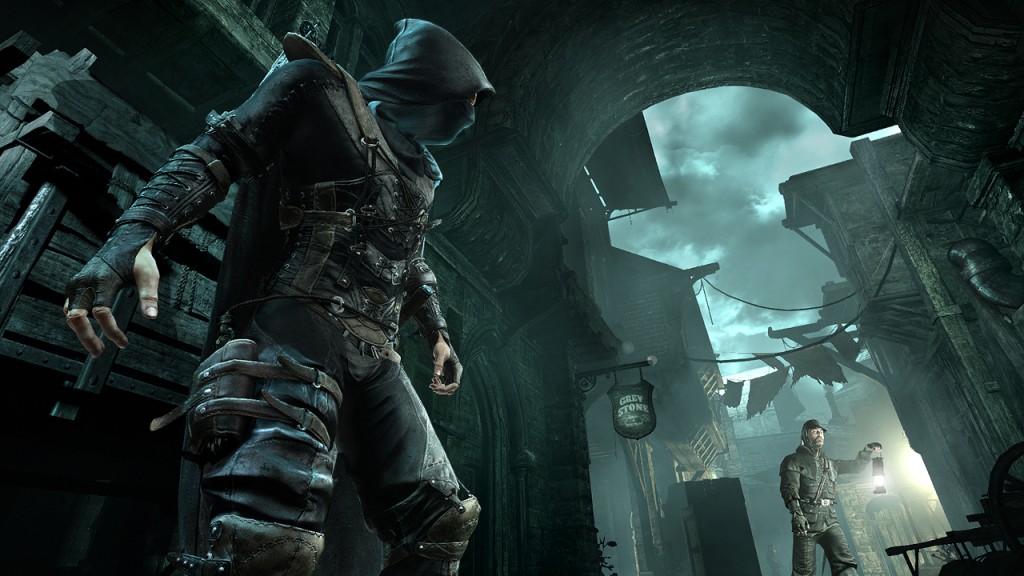 Square Enix and Eidos showed off a pre-alpha of Thief running on a PlayStation 4 development kit. The demo highlighted many of Garrett’s tools and abilities while showing live gameplay. It was emphasized that the game wasn’t near final standards and a lot of the elements weren’t final.

Regardless, Thief reintroduces stealth without futuristic tools. Square Enix calls Thief a “reinvention” and not a “sequel or prequel” in the series. There are changes to the original gameplay as well as taking advantage of the increased power of the console. The pre-alpha contained one mission where Garrett had to steal a family heirloom called the “Heart of the Lion.” He has to take advantage of a gathering mob outside Northcrest Manor to infiltrate and find the precise location of the family vault. 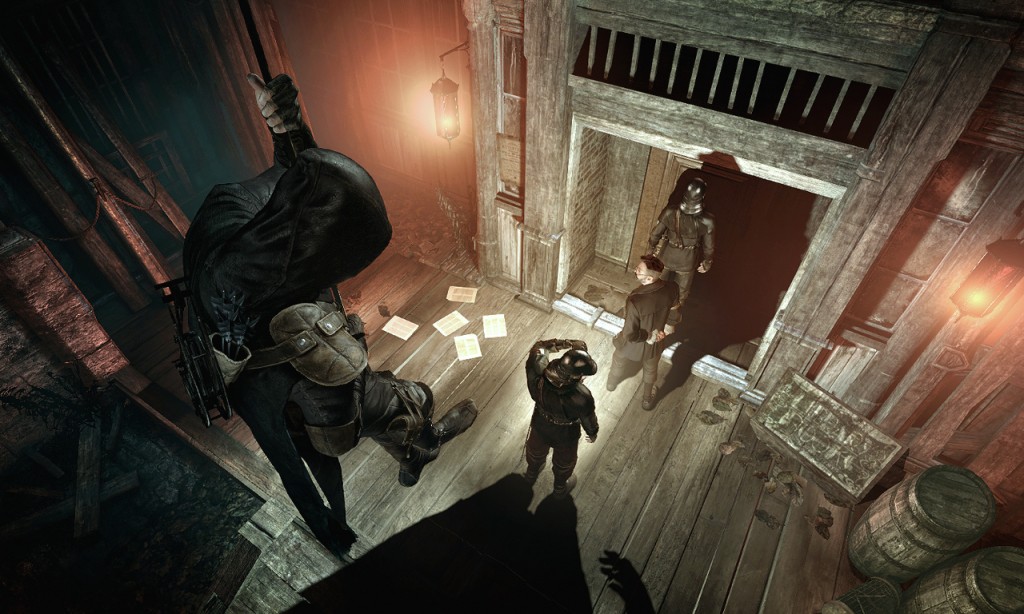 The visuals of Thief are impressive even at this early state. It was easy to tell that a lot of time was spent developing the lighting engine because of the game’s use of shadows. Additionally, the environments carry a lot of detail like high resolution textures and impressive character animations. The demo took about 20 minutes to complete and showed off different abilities like Focus, which highlights objects you can interact with, assist with puzzles, and highlight enemies as they are walking through the level.

The plan for Thief is that you can play the way you want; playing an entire game using stealth with all non-lethal attacks is possible or you can be aggressive. Another option in the game is the ability to disable Focus so you will play without any hints available. I asked one of the developers if the heads-up-display (HUD) was finalized, and I was told that most HUD elements were still in development. I also asked if it would be possible to play Thief without a HUD, and they hinted that it was something they were looking into. 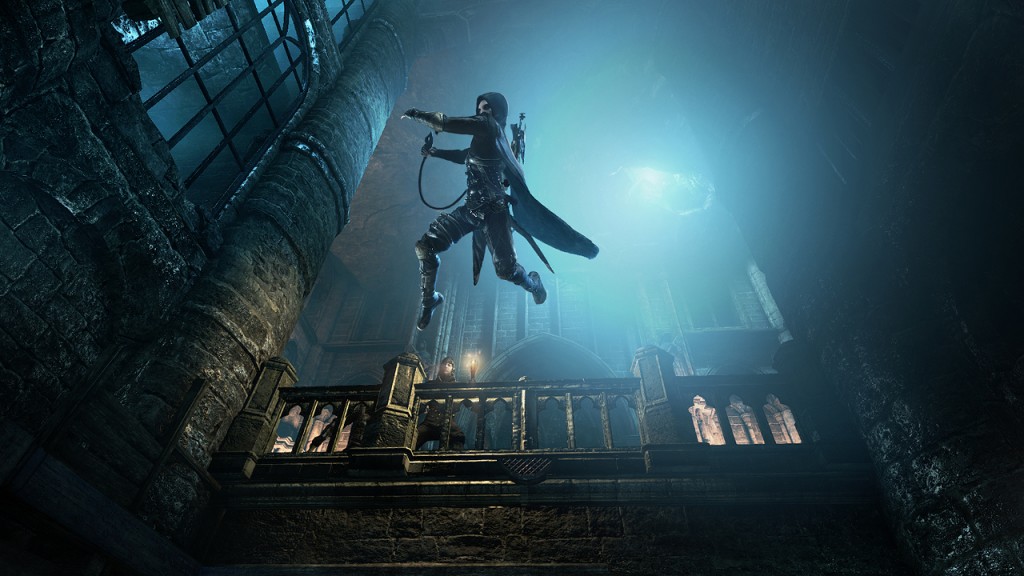 After the demo, I was able to get a hands on with the game running on a PS4 development kit. The Thief hands on demo is the same as the one Square Enix showed. The difference being a tutorial that educated you on the different controls. Even though the demo was a highly focused portion of the game, it showed the great potential for the return of the Thief series.

After the tutorial, the demo opened up inside Northcrest Manor. Moving around creates surface noise and that includes water as it ripples. There’s a “swoop” ability that allows you to quickly move between two hiding places, but you can also hide behind objects and peek around the corner. It was difficult to get used to the gameplay mechanics because the enemy AI was much more intelligent in searching and listening for noises. 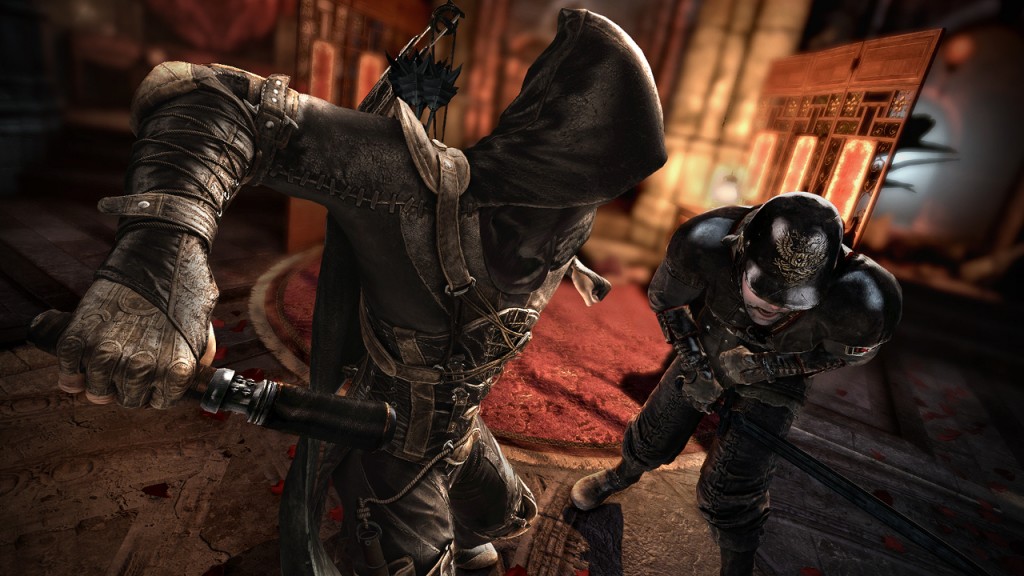 Garrett also has a bow and different arrows. The demo included water arrows to put out torches, a fire arrow, blunthead arrow, and rope arrow. He also has normal arrows, but enemies will not fall in one hit unless hit in the head through their helmet, as I discovered.

Using Focus, I highlighted the guards and quickly climbed up an archway to move through a garden in the first area. Using Focus decreases over time and you have to replenish it with poppies. Eidos said that these items will not be abundant so you had to be aware of how long you used it.

Moving through another courtyard, it was impressive to see how light and shadows appeared on different objects and the animations of the guards. If you are quiet enough, you can pickpocket money from guards without them noticing as well as knock them out. At this point I tried to knock out a guard and was quickly killed by an archer and guard who carried a sword. 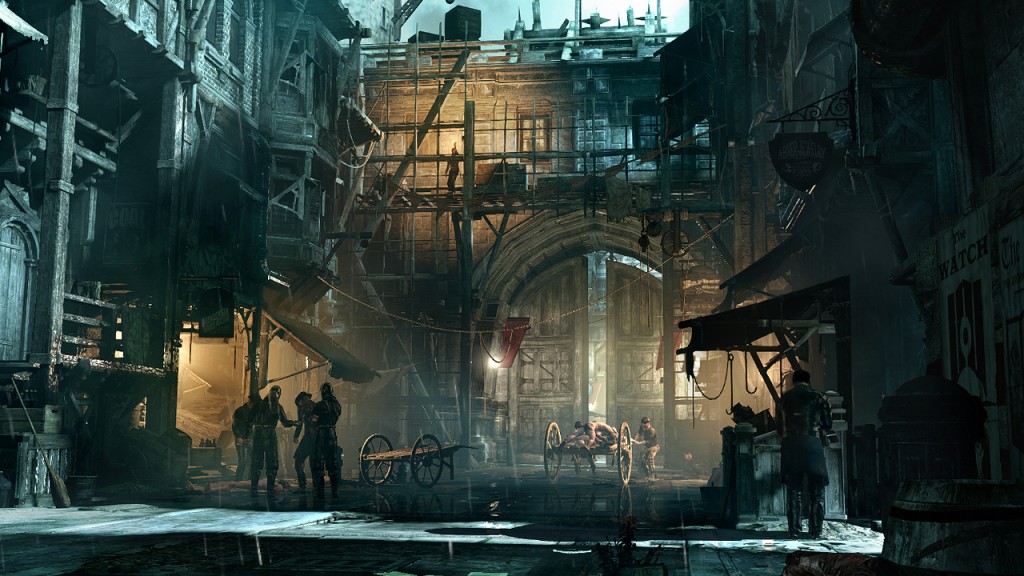 Eidos’ demo accomplished much more than I did and showed more skills like how Garrent can pick locks. You normally pick locks from the outside of the door and work both analog sticks to find the tumblers. If you can’t solve it, you are able to use Focus to peer inside the lock itself. This also works for traps so you can find out where the main box is connected. Focus looks like it will be great for novice players.

When sneaking inside buildings, you can peek through keyholes to see what is going on inside before you enter. This will be very important because you could walk directly into a room full of guards. The demo from Eidos showed a secret door found behind a vault. The door was behind a painting, so Garrett ran his hands around the frame until a small indicator showed where the button was. 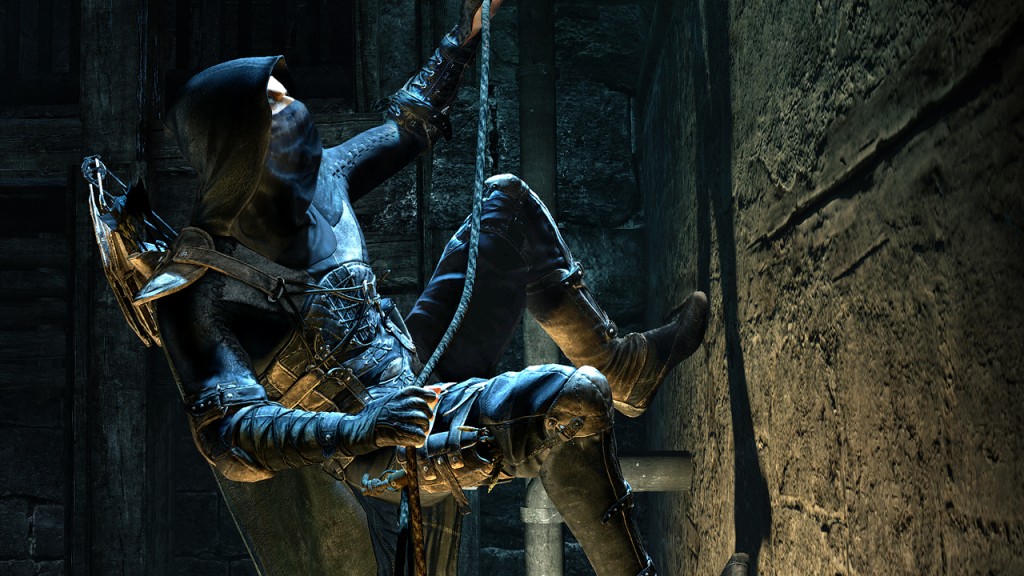 Inside, he also had to solve a two-part puzzle of matching the family crest through sliders on one side and actually peeking into the lock mechanics on the other, which functioned through a counter weight that had to fall to the floor. It will be interesting to see the different puzzles in Thief as more information is released. After retrieving the Heart of the Lion, he escaped through the skylight with a rope arrow.

There is also an escape from the manor scene as the mob moves in and fire swallows the bridge you have to cross. The demo showed that when climbing around the outside of certain areas, Thief uses a third-person view to move through the environment. It was a little strange for the change and it will be interesting to see how much the game uses this mechanic. There was also a short quick-time-event in the game which was disappointing and hopefully there won’t be many in the final build. 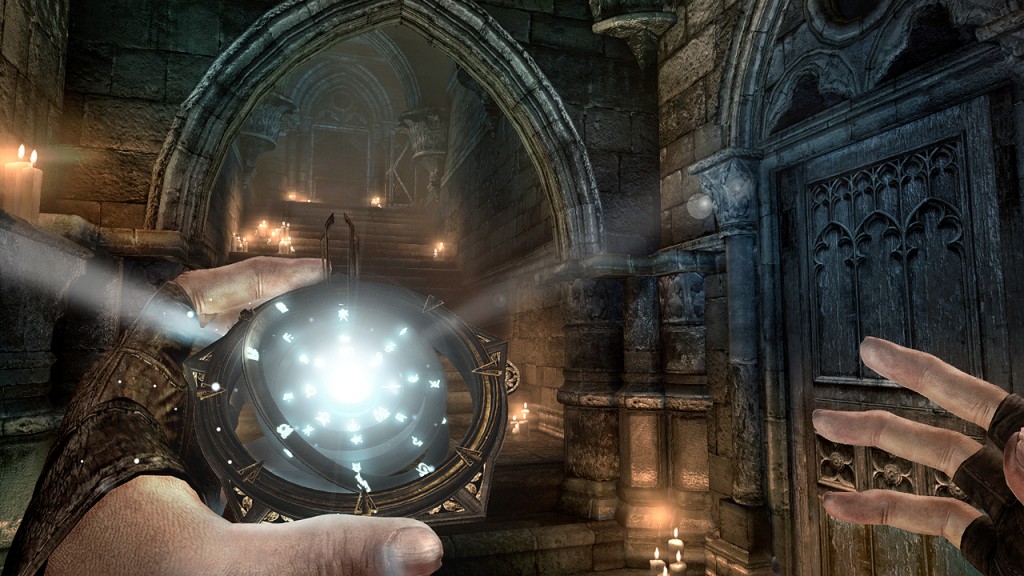 Overall, Thief is a stealth game and the demo by Square Enix and Eidos showed some amazing gameplay. My own hands-on went much worse, but I’m sure the learning curve will teach you all the tools you need to succeed. Actually playing the pre-alpha on a development kit showed me that beyond the visuals of this upcoming game, the overall experience can be mcuh more amazing.

The game is scheduled to release in 2014 for PlayStation 4, Xbox One, and PC, but a precise release window wasn’t announced.