Think you could run WWE? Fire Promoter lets you try

For the last several years, wrestling fans have been baffled by Vince McMahon’s booking decisions for the WWE. From dropping storylines for no discernible reason, to burying fan favorites, and giving mega pushes to unpopular superstars, many fans wonder just what goes on inside the eccentric billionaire’s head.

Those who truly think they could run a promotion better will be pleased to know that Fire Pro Wrestling World’s Fire Promoter DLC has finally been released. Fire Promoter has been hyped up by fans to be the natural successor to the acclaimed GM Mode from the old Smackdown vs Raw games. After numerous delays, Fire Promoter is here at last. Fortunately, it lives up to the hype. But how does it work?

What is Fire Promoter?

Fire Promoter has players taking control of a brand new wrestling promotion with the goal of becoming the most popular brand in the world. The mode is not a sandbox storytelling device like WWE2K’s Universe mode, but rather a game where the player competes against rival AI promotions to build the most successful wrestling business.

Fire Promoter includes a few dozen fictional promotions and hundreds of fictional wrestlers to play with, though these can be substituted with real wrestlers and promotions through Fire Pro’s built-in community creations system. For example, in my playthrough, I chose to play as AEW going up against WWE, NJPW, TNA, CMLL, AAA, Progress, and Ring of Honor. For each promotion, you set the number of wrestlers and free agents, as well as their style. WWE’s flashy and aggressive style fits the “Showman” style for example, while NJPW’s focus on technical in-ring action suits the “Strong” style. Choosing a style for your promotion is important as it determines which wrestlers want to work with you and which promotions will seek you out for partnerships.

Initially, you start with only six wrestlers, though you can enter a cheat code to start with as many as you’d like (hold L1 + L2 while choosing your difficulty and the number of wrestlers). The amount of money you start with depends on the difficulty you choose as well. Rival promotions, especially top ones, start with significantly more money than you do to show that they’re already established. Once you’ve set up your difficulty options and starting roster, you’re ready to go!

The roster-building aspect of Fire Promoter is one of the most dynamic and fun parts of the mode. You can view which wrestler is in which promotion, as well as which free agents exist in each territory (America, Japan, Latin America, and Europe).

To build up your army of talent, you have two main options. First, you can pay scouts to search for undiscovered talent in each territory. You have multiple scouts at your disposal, each one specializing in a certain territory and style of wrestling. If your scout successfully discovers a wrestler they will appear as a free agent in their respective territory. These discovered free agents are eager to be signed, so be sure to pick them up quickly before another promotion snatches them up.

The second option you have is offering contracts to wrestlers directly, whether they be free agents or talent at competing promotions. Whether or not the wrestler actually accepts is dependent on a number of factors. Obviously, the amount of money involved is a big factor, and lowballing their signing bonus hardly ever works for anyone bigger than a mid-card talent. Additionally, the talent is more likely to sign with you if their wrestling style matches your promotion.

Lastly, wrestlers who are already signed to competing promotions have trust levels. If their trust level is high, then they are less likely to leave and sign with you (no matter how much money I offered, the Undertaker refused to leave Vince’s side). Signing wrestlers from other promotions will anger them, causing them to be less likely to want to work with you for crossover events.

Once you actually have your wrestlers, it’s up to you to keep them happy. Wrestlers have different popularity levels in different territories, and they can win over the crowd by winning often, gaining titles, and putting on high-quality matches. As wrestlers get more popular, they will often demand more money or bigger pushes, and it’s your decision as to whether they’re worth the hassle (Bray Wyatt is a huge money-guzzling primadonna in my game, but he’s so popular that I’m forced to oblige).

On the flipside, wrestlers who are fed up with low wages or lower-card matches will sometimes storm into your office demanding change. If they get pissed enough they’ll leave for the free agency. Additionally, there are random events that can affect a wrestler’s reputation. For example, in my game Kurt Angle was involved in a hit and run, causing him to be fired by WWE and allowing me to scoop him up.

Keeping talent happy and booking them right will make sure they stay with you. Be sure to put on good matches to keep them popular, in addition to enhancing your roster with hot free agents.

Much like in life, in Fire Promoter you need to spend money to make money. For the first few months, your promotion will almost certainly lose money until you build some momentum. Fortunately, you have many other sources of revenue besides ticket sales. You can produce various kinds of merchandise to sell, which provides a nice supplementary income. Be careful about when you produce merchandise and how much of it you make, however. Merchandise sales really pick up after huge events, so if an event goes poorly or you accidentally manufacture too much merch, it’ll sit on the shelves, costing you a ton of money. At the beginning of my game, I manufactured small amounts of T-shirts and towels for my events, the profits of which definitely saved me from going under before I gained momentum.

The 10 best games on PlayStation Now

As your promotion becomes bigger, you’ll have the opportunity to sign deals with sponsors and broadcasters, both of which rake in tons of cash. Sponsors will give you money to plaster their logo all over your ring. More lucrative sponsors often come with stipulations that you must follow. For example, one of my biggest sponsors was a pharmaceutical company. They doled out the cash on the condition that I never set up hardcore matches or deathmatches. Sponsors can also offer small benefits, such as a clothing company reducing the cost of producing T-shirts or an energy drink company making your wrestlers heal from injuries faster.

Getting broadcast deals can make or break your promotion. Starting from local television all the way to international broadcasts, these deals will bring in a ton of money and exposure to your promotion. The flipside is that you must cater to their often picky demands, such as having every single event of yours get above an 80% rating.

Putting on a show 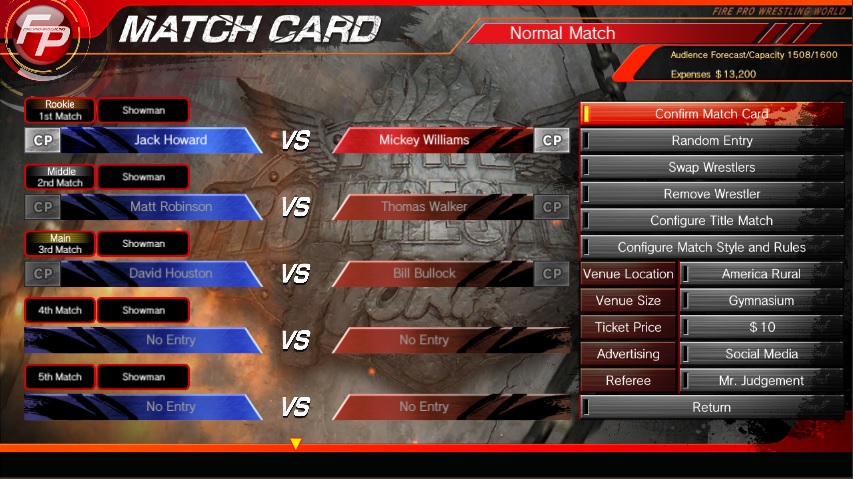 The most important part of any wrestling promotion, obviously, is putting on a show. Successful events in Fire Promoter are determined by the amount of money they bring in and how well they go over with fans (displayed with a percentage).

To pull off an event you must carefully arrange the card, from the main event all the way to the lower card. Put your most popular wrestlers in the main event, switching them up every month or so for some variety. By taking a rising mid-card wrestler and putting in the main event, you can make him go over by putting on a good match. It also helps to put title matches in the main event, as they bring in more spectators. There are a variety of match types to choose from, including tag matches, 6 and 8 man tag matches, cage matches, various deathmatches, and MMA fights.

When running through the event, you can choose to play a match (either by taking control over a wrestler or watching the AI fight it out) or sim a match altogether. Note that you cannot outright choose who wins the match, so if you’re really banking on a specific wrestler to win a match, be sure to play as them and whoop the AI’s butt. To ensure highly rated matches, try to keep the fight as even as possible to keep things exciting. Longer matches tend to do better, so pace out the match and have things gradually escalate. Take down your opponent with a finisher for extra style points.

Outside of the ring, you must keep track of other factors in setting up your event. To make your promotion look popular and successful, you must fill out the venue whenever possible, so it’s better to get a full house in a small arena than an emptier crowd in a larger arena. The amount of people who attend your event depends on the match card, the ticket price, and the advertising. Lower ticket prices mean more people, but obviously lower profits. By taking advantage of popular talent and well-built match cards you can get away with higher ticket prices. Additionally, advertising makes a huge difference in attendance. Filming TV commercials or starting social media campaigns bring in huge crowds but also burn a hole in your wallet, so balancing venue, advertising, and ticket pricing is key.

Fire Promoter is an extensive mode that rounds out the already excellent gameplay of Fire Pro Wrestling World. It could use some polish; crashes happen, so save frequently. Also, the mode explains itself poorly, so hopefully this article clears things up. Other than that, it is certainly worth the $20, and with additional features and tweaking, may end up being the best wrestling sim mode ever.

The Best Free-to-Play Games on Steam in 2020