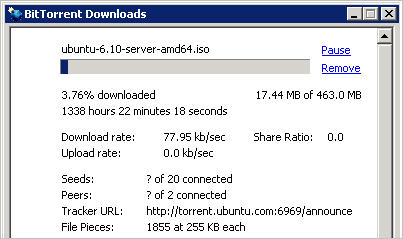 A Firefox extension to handle .torrent files, called Firestorm, is in the works and expected to be released soon (late April say the developers). Using source code from the official Bittorrent client, Firestorm will allow Firefox users to download torrents directly from their browser. Unlike the latest Opera, Firefox has yet to handle torrent support and this little extension could come as a blessing. From the little we could see in the screenshots, Firestorm looks like it will manage multiple torrents in the traditional Firefox download window. You’ll also be able to create your own torrents and set the traditional torrent settings like port, upload and download rates and maximum number of connections.

I don’t really know how much strain this extra extension will put on Firefox, infamous for gobbling up memory, but it’s great to see a project like this being undertaken. As TorrentFreak do well to point out, there are two other torrent extensions for Firefox already. “FoxTorrent and BitFox are similar projects that work on adding a BitTorrent download manager to Firefox”. These types of extensions are all relatively new but it’s good to see developers finally tackling the torrent issue on Firefox.