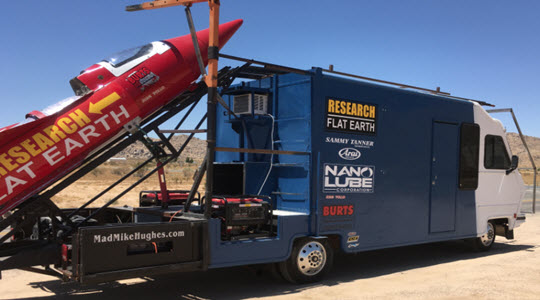 “Mad” Mike Hughes has been trying to launch his homemade, steam-powered rocket for a while now. A variety of circumstances have blocked his attempts to launch including the fact that he failed to submit the necessary paperwork required to launch a rocket from government property. Having finally crossed all the Ts, dotted all the Is, and found a suitable launch location “Mad” Mike was finally able to launch his “Research Flat Earth” rocket, within in it, on Saturday morning just outside of LA.

Ambitious crackpot self-taught engineer launches himself almost 2,000 feet into the air on a rocket he built himself almost sounds inspirational. The crazy part is the “Research Flat Earth” plastered on the side of his rocket. Hughes was sponsored by a Flat Earth research group, which is why he took the message with him on his date with destiny. Unfortunately, 1,800 feet isn’t high enough to be able to see the curvature of the earth so Hughes won’t be able to say definitively one way or another whether the earth is flat or round.

The question does remain, however, about why would a flat earth organization want to sponsor a project that could provide irrefutable evidence that the earth is round? We’d love to hear your thoughts on the matter in the comments below.