It’s been 595 days since the last new episode of “Game of Thrones,” so the show had a lot of housekeeping to do. The last thing we saw back on August 27, 2017 was the army of the dead marching south. Oh, and the Night King was riding on a newly zombified Viserion (one of Dany’s dragons). 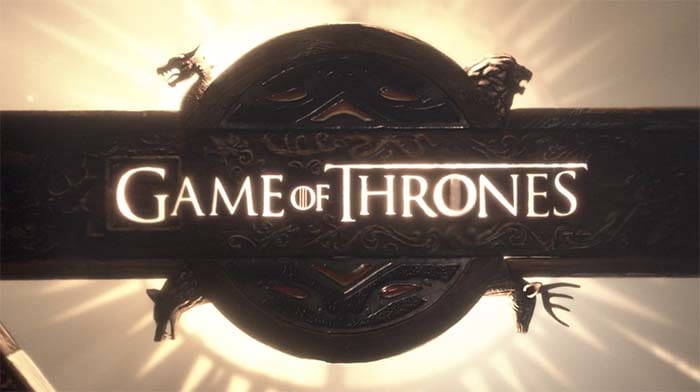 So how would the show fare in its return? Read on to discover what happened in the Season 8 debut. Spoilers ahead, obviously.

The episode begins with the first major overhaul we’ve ever had to the title sequence. Gone are the familiar stops like Pyke, Meereen, or Dragonstone. Now we’re smacked in the face with a big hole in the wall, and visits to Last Hearth, Winterfell, and King’s Landing. The animation is new. The stops are few. We’re in the endgame now.

This episode was all about reunions. Old friends, foes, and family reconnect. All of our characters are fundamentally changed from the last time they met. Although the people are the same, so much has changed.

As “Winterfell” begins, Jon Snow and Daenerys Targaryen arrive at the Stark castle at the head of a massive army and her two remaining dragons. The northerners are shocked because they’ve never seen dragons (or black people) before.

Jon dismounts and trots over to Bran. “Look at you,” Jon says. “You’ve become a man.”

Bran says a lot of weird stuff in this episode. Three-eyed Ravens aren’t known for their people skills. Mostly, he just glares at people and makes them uncomfortable. Bran cuts the reunion short, explaining that no one really has time for hugs. The army of the dead is on the move, after all.

Inside the castle, a child named Ned Umber explains that his force at Last Hearth needs reinforcements. (We’ll see him again later this episode.) Lyanna Mormont voices her tiny, adorable displeasure at Jon’s alliance, saying the King in the North should never kneel before an outsider. And yet, Jon explains, he chose the North over his own crown. This does not go over particularly well. The northerners grumble, and Sansa doesn’t help matters.

Incredibly, Daenerys keeps her cool through all this. Old Dany would have set people on fire for disagreeing with her. New Dany realizes that murder might be an expedient way to get people to fall in line, but occasional smiles and diplomacy are often a better long-term solution.

Tyrion reunites with his long-lost wife Sansa. They’ve both had a rough ride since the last time they saw each other (Joffrey’s ill-fated wedding). While Tyrion tries to make peace, Sansa isn’t in the mood. A second marriage to Ramsay Bolton will do that to a girl. Bran turns his stalker-vision on Tyrion, which seems like a real treat.

In the episode’s best scene, Jon reunites with Arya. While the gleeful Arya of the early seasons has fallen away to the Faceless Girl, it was nice to see the old spark ignite upon seeing her big “brother.” The two compare swords and share a hug. They haven’t seen each other since Jon gave Arya “Needle” before her trip to King’s Landing in Season 1.

Speaking of King’s Landing, Cersei is surprisingly upbeat about the news the army of the dead has broken through the wall. Euron Greyjoy works his weird, pervy charms on Cersei and sweet-talks his way into her bed. This, despite the fact that Euron and the newly-bought Golden Company of mercenaries did not arrive with the elephants the Queen was hoping for.

The Euron-Cersei scene gave us the best quote of the episode: “You want a whore, buy her. You want a queen, earn her.”

While Euron is busy, uh, getting busy, Theon mounts a rescue mission of his sister, Yara. She repays the kindness with a headbutt. (Gotta love those Iron Islanders.) Later, Yara allows Theon to join the crew at Winterfell. He’ll likely get an icy reception considering the way he left the place the last time he was there.

Back in King’s Landing, Bronn is getting acquainted with three prostitutes who are recounting, in graphic detail, the way Dany’s dragons torched the Lannister army. Qyburn shows up to thwart Bronn’s fun, but the sellsword is surprisingly cool with it. Cersei is willing to pay Bronn to kill Jaime and Tyrion with a crossbow. Bronn seems to be considering it.

Which Game of Thrones house are you?

Back in Winterfell, Davos suggests to Tyrion and Varys that Jon and Dany would make a good king and queen. Will he still feel that way when he finds out Jon is Dany’s nephew? The show has featured stranger bedfellows…

Dany learns her remaining two dragons aren’t really eating, so she hops aboard and goes for a ride, convincing Jon to go with her.

Now might be a good time to bring up the three dragons in the show.

Anyway, the dragon-riding sequence is a little goofy. It’s kind of like the Falcor-riding scenes from “The Neverending Story” mixed with the supposedly romantic horse chase in “Tombstone” mixed with “A Whole New World” from “Aladdin.” When Jon and Dany land at a beautiful waterfall, Jon plants a kiss on his queen while Rhaegal looks on, unamused. 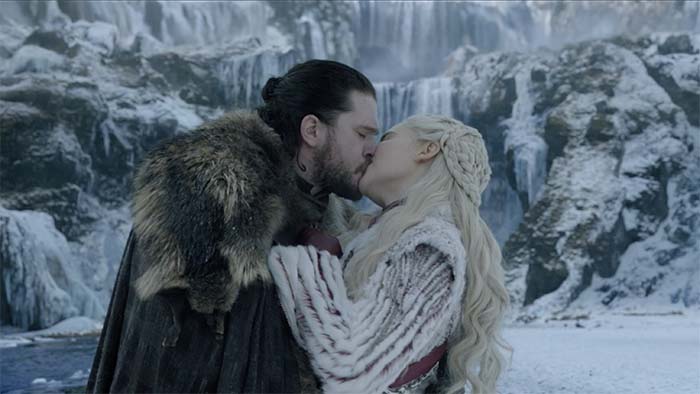 Back in Gendry’s workshop, dragonglass weaponry is all the rage. The Hound gets a custom-made dragonglass ax and fires off a few insults until Arya shows up. She and The Hound trade insults. Arya kinda hits on her old pal Gendry and asks him to make her a special weapon that looks a bit like a harpoon launcher.

Sansa keeps fussing about Jon’s supplication to Dany. “Did you bend the knee to save the North or because you love her?” she asks.

Dany meets Sam and attempts to thank him for curing Jorah’s greyscale, but then explains that she executed Sam’s father and brother, Randyll and Dickon. Sam does not take this well, despite the fact that his father was a class-A jerk-nozzle.

Sam excuses himself to cry and bumps into Bran, who declares that now is the time for Jon to learn his true parentage. Down in the Stark family crypt, Sam spills the beans. Jon is the son of Prince Rhaegar Targaryen and Lyanna Stark. The man Jon thought was his father (Ned Stark) promised Lyanna that he would never reveal the true parentage. Why?

If you remember back to Season 1, we learned that Robert Baratheon only came to power as the result of something called Robert’s Rebellion. Robert loved Lyanna Stark and wanted to marry her, but Rhaegar swooped in. Robert and Ned believed Lyanna had been kidnapped, but the relationship was consensual. The Mad King (Aerys Targaryen -Rhaegar’s dad, Jon’s grandfather) threatened to burn all of King’s Landing, so Jaime Lannister put a sword through his back. Robert killed his romantic rival, Rhaegar. And Ned discovered his sister dying after giving birth to the child who would become Jon Snow. Ned knew that if his friend Robert discovered that Lyanna had a son with Rhaegar, the child’s life would be in danger. (After all, Robert wanted all Targaryens dead.) So, despite the blow to his honor, Ned concocted the story that Jon was his own bastard son.

As Sam explains, all of this makes Jon/Aegon the true heir to the Iron Throne. It also makes Daenaerys his aunt. While that is normally a huge problem for most potential couples, the Targaryens are famous for their inbreeding. (No harm, no foul?)

While Jon/Aegon is wrestling with the implications of this, Sam lays out the big question: “You gave up your crown to save your people. Would she do the same?”

The action moves to Last Hearth, where Dolorous Edd, Tormund Giantsbane, and Beric Dondarrion find Ned Umber pinned to the wall as a warning from the Night King. Dead Ned opens his eyes and starts screaming like a maniac until Beric sets him on fire. Zombie-Ned and the limbs of other dead Umber-folk ignite, making a flaming meat pinwheel design on the wall. 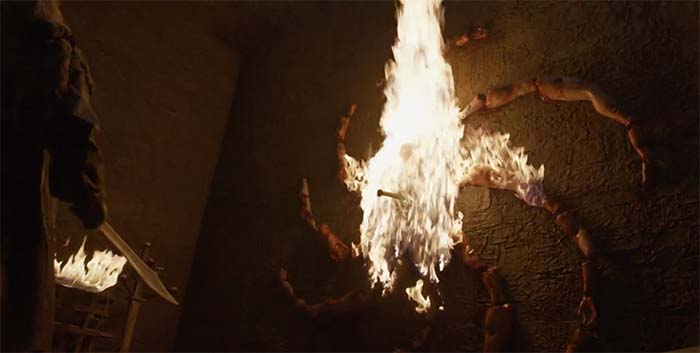 You’ll remember the White Walkers frequently arrange the limbs of their victims like that:

Back at Winterfell, Bran finally sees the “old friend” he’s been waiting for – Jaime Lannister arrives and makes eye contact with the person he shoved out a window back in Season 1. It is awkward. The episode ends.

While the episode did a fine job juggling so many characters, it lacked the high stakes and tension the best “Game of Thrones” episodes bring. While it was necessary to move all the pieces into place, we got precious little in the way of character development this time around. Most characters simply restated their familiar traits, and the show tried to convince us that the North will descend into petty squabbling when confronted with a zombie army. We’re not buying it.

Though Cersei’s maneuvers are intriguing, she’s best when face-to-face with her enemies. Right now, they’re all on the other side of the map. We’re very curious to see how/if she ever runs into the rest of the cast in the North. While the White Walkers are spooky, they’re a predictable bunch, so we hope the show uses Cersei as the evil wild card she’s always been.

More about Game of Thrones

10 most shocking Game of Thrones moments ►

We broke down the new Game of Thrones Season 8 trailer, frame by frame ►