If you’ve got a lot of big files such as video clips that you want to access anywhere you’ve got three options. You either transfer it to an external device and carry it around with you which is cumbersome. You can upload it to a server but that will cost you. Or, you can upload it to a free storage site such as Humyo who are offering 30GB of space absolutely free. 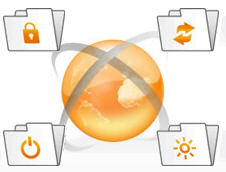 There’s one catch though – 25GB of the 30GB must be music and video files although for most people, this is exactly what they’ll need it for anyway so it’s no major drawback. You’ll first need to download the Desktop Client which allows you to use Humyo like any other virtual hard drive attached to your computer. Humyo then automatically reads meta tags so it neatly organises your files into video, music and even photos. Note that the Desktop Client only works on the Windows platform at the moment.

Now I know what you are thinking. “Hang on, this sounds a bit dodgy – why would they want me to just upload my media and audio files. So they can send round the MPAA/RIAA to sue my ass?” Well, there’s no guarantee that Humyo is not just a front for some kind of copyright sting but it’s unlikely. One theory is that they’ve used this policy to stop businesses hogging it rather than home users. However, the most likely reason is that Humyo wants to create a video, music and photo file sharing community because one of the other catches is that your uploaded photos are “branded” with a small Humyo logo on them. Similarly, audio and video is only shareable by playing it in Humyo’s own audiovisual player.

That said, it’s still a great backup solution if you have no other way of saving or taking video, photo and music files with you on the move.