The standalone Google+ Local app for iOS didn’t gain much traction with users. It never felt integrated into the whole Google+ experience even though it offered the ability to search for restaurants and read reviews from  Google+ and Zagat.

After Google I/O 2013 and the launch of the new Google Maps on Android and iOS, Google+ Local is a redundant app. Google announced, via email, that Google+ Local on iOS will be “retired on August 7th, 2013.” 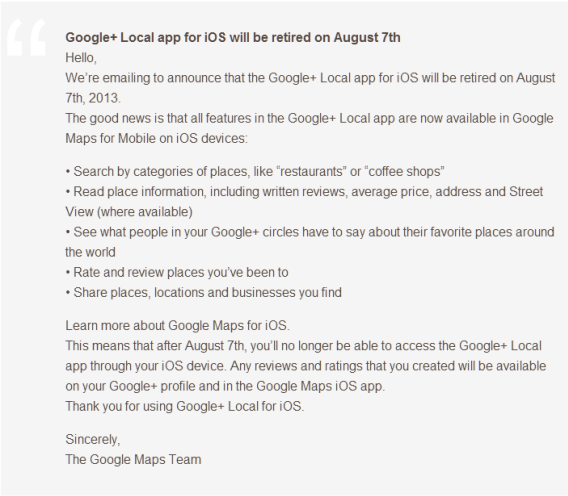 All the features in Google+ Local are already included in the updated Google Maps on iOS. It’s no longer necessary to have two apps that do the same thing.

Google has been streamlining its products and spent I/O focusing on improving its core apps. Since Google Maps is more useful and users will be searching for points of interest, integrating Google+ Local’s features is an intelligent move.