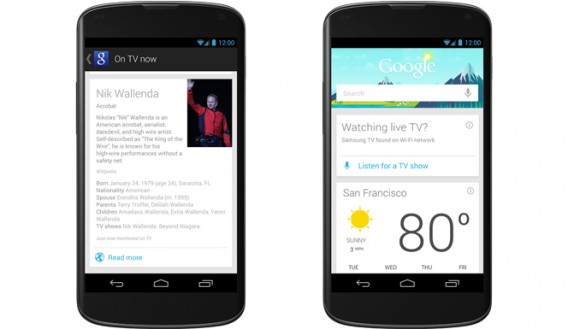 Android’s predictive assistant, Google Now, has updated with a couple of new cards as well as more options for streaming music. The most interesting addition is a card for live TV. If you have a WiFi enabled television, you can sync it up with your Android device if you have both on the same network. Once connected, Google Now will be able to “listen” for live TV, providing you with information about the show, game, or movie. This is great if you’re constantly wondering where you’ve seen that actor from.

Also new to Google Now is the ability to choose which music player to play music from. For example, if you search for Jimmy Eat World, you’ll have a drop-down menu where you can choose which app to begin playing music. It’ll be interesting to see if Google will integrate this menu for other voice commands like sending a message.

Last but not least is the new Google Offers card, which will remind you of your purchased deals if you’re near a participating location. It’ll be interesting if Google uses Now as an ad platform to push local deals to Android users.