The moment that Potterheads have been waiting for has finally arrived! Wizards Unite is here!

On June 21, the augmented reality mobile app created by Niantic and WB Games was officially launched in select countries, although for the UK and U.S., the app appeared in the iOS app store and Google Play one day early. Those familiar with Niantic will recognize the developer as the one that brought the world Pokémon GO in July of 2016. Pokémon GO swept the world in a craze not many of us had seen before, with servers collapsing until the weight of all of the people trying to access it. 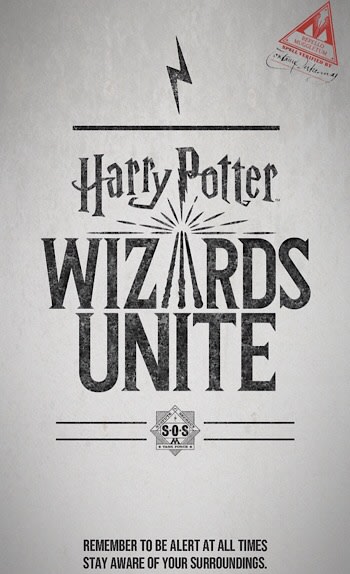 Luckily Niantic was ready this time around, and we were able to open the app with no failure to load messages on June 20. Immediately we’re thrown into the story, with a video of headlines from the Daily Prophet, the newspaper for witches and wizards, catching us up on the events that have transpired in the wizarding world since the Battle of Hogwarts.

Harry Potter, Hermione Granger, and Ron Weasley are hailed as the “Hogwarts Heroes” and all accept positions in the Ministry of Magic, the government of the wizarding world. All was well until the “London Five” went missing, and the Ministry closes the investigation after being unable to find them. The video ends informing us of the start of the Calamity, and all we know is that because of it, the wizarding world is at risk of exposure.

A note before we begin: there is a LOT of information to ingest right at the start of play. Don’t worry, even the biggest Potter fans feel a little overwhelmed. Polish that wand, and read on!

We officially begin the game and a Ministry of Magic employee, Constance Pickering, tells us that we are part of the Statute of Secrecy task force. Magical people, artifacts, and memories have been stolen and scattered all over the world. It is our job to help return them to where they belong and contain the Calamity before the Muggles (non-magical people) are made aware.

We are then introduced to an older Harry Potter, who shows us our Magical Me, who marks where we are on the map. As you walk, bike, or ride in a car to different locations, the Magical Me will move as well (tap on them and they’ll say hello!). 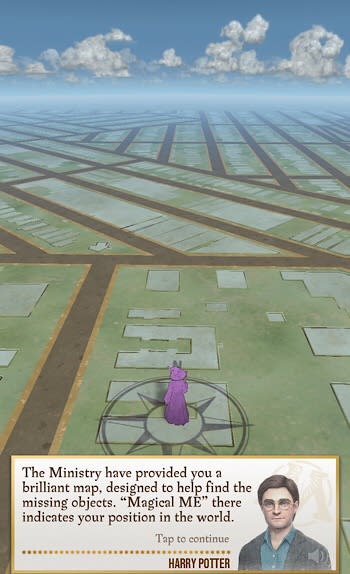 Harry briefs us on the important stuff – like traces. Traces are markers left all over your map that show the location of a magical item, called a Foundable, that needs to be returned.

Which Harry Potter character are you? (Quiz)

After clicking on a Trace, we’re shown a Confoundable (chaotic magic that has stolen the Foundable) and where it sits on the threat level meter, or how likely this Foundable is to expose the magical world. Trace the spell, quickly and accurately, and the Foundable is returned. 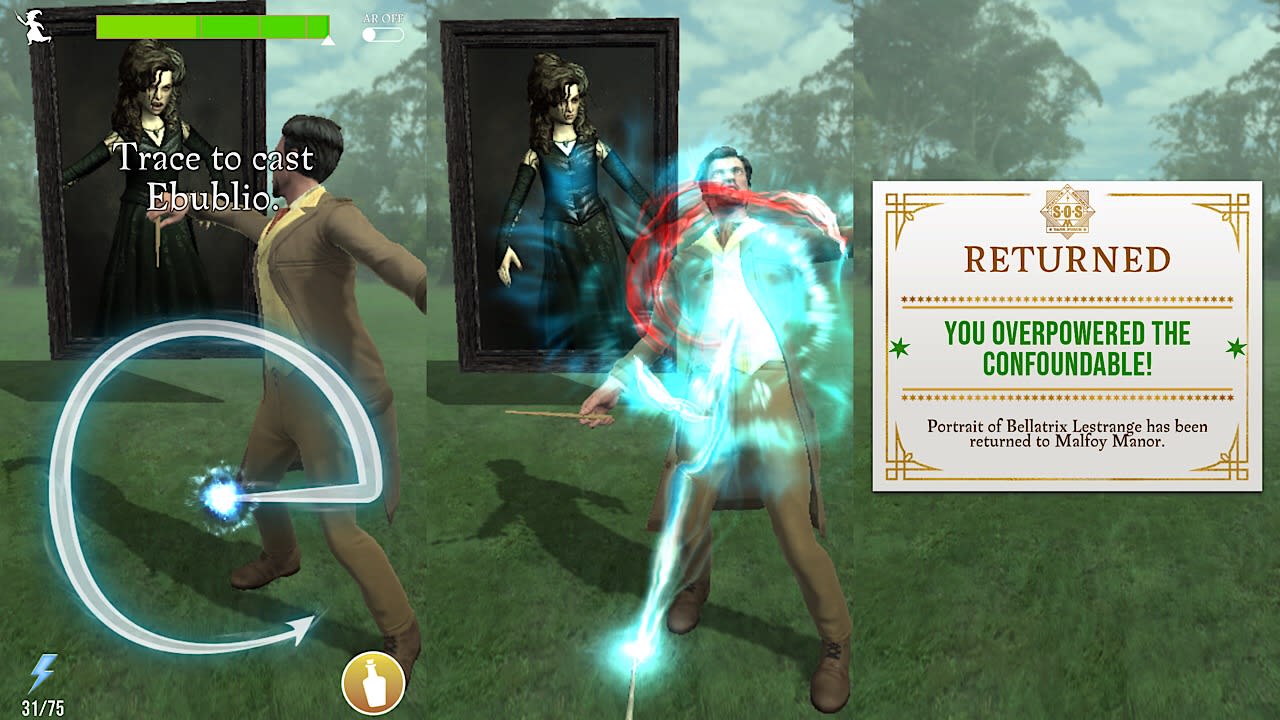 The release of the Foundable and your ability to trace the spell accurately earns your character XP, with extra points for being able to do it on the first try. The more XP you get, the faster you level up. Collect Foundables and put them in your Registry, made up of 10 different categories, which keeps track of everything that you have collected and what you have left to find. Some Foundables are lost in fragments and you’ll see them a few times in Traces until you have them all. Sometimes, the Confoundable magic is too strong and they get away with the Foundable. This is avoidable (most times) with potions.

How does one get potions, you ask? You brew them with ingredients, which you find everywhere, on the map, at Inns and Greenhouses, in your Daily Rewards and winnings from Challenges and returning Foundables. Potions are nice to have when you first start (and you’re given a few), but once you get to level 10, they’re a must-have. At that point, Confoundables become more difficult to overpower, and it’s very hard to make it through a Challenge without them. Each potion lasts for a few casts in battle. Here are the potions currently available:

In the description of each potion, you’ll see the ingredients needed, how long it takes to brew, and how many uses per brew. Queue up four potions at a time and finish brewing immediately by using gold or speed up the process by 15% by solving the missing sequence of gestures that make up the Master Notes. 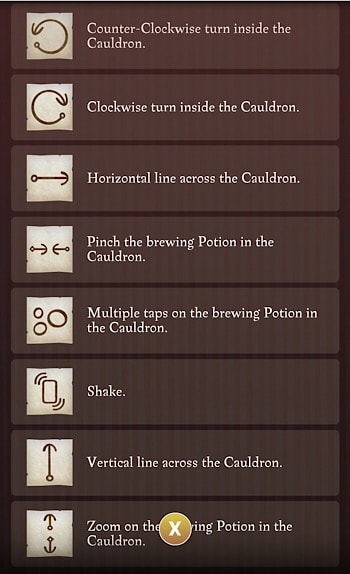 Stir left or right, tap the potion, shake your mobile device and more. Once you get to level nine, you can unlock a special cauldron that you can rent with coins for three hours, eight hours or a full day that will brew potions faster. Tip: Keep an eye on your ingredients in your Vault. It really sucks when you go to pick up an ingredient you’ve been looking for only to find that your Ingredients Vault is full!

Constance Pickering says that Inns are for special meals, drinks, and snacks that are kindly prepared for travelers. Choose a covered dish and get a meal and spell energy. There are currently five different types of Inns that players have reported, each a different color and giving a varying amount of spell energy. Spell energy is incredibly important, and you cannot play without any.

Ready to battle some dark wizards? Fortresses are where you can do it! Similar to Greenhouses, Fortresses are located in front of real businesses or landmarks. In a Fortress, you can either battle solo or group together with your friends to defeat the evil inside. Fortresses are made up of different chambers that increase in difficulty, and to enter the first chamber you’ll need to pick a runestone.

Each runestone represents a specific Registry category and level of difficulty. Once chosen, you enter the lobby and wait and if there are other players standing in front of that location, you can assist each other in a battle. For the 30 seconds that you’re waiting, you can use one Focus each to cast Strategic Spells. These spells can strengthen teammates or weaken enemies. Then the battle begins.

The goal of these battles is to defeat all of the villains in each Fortress chamber before the timer runs out. Battles are like getting Foundables – cast by tracing a spell, but in battles, you cause damage to the villain’s health and they do the same to you.

Along with tracing the spell, you’ll also trace an arrow to quickly use a defensive spell when the enemy attacks. These are were your potions come into play. Before you cast a spell, tap on the potion bottle if you need a quick boost to your health or to strengthen your spellcasting. If you beat all of the enemies before time runs out, you win! The chamber is cleared and you earn some goodies. You’ll have to replenish your spell energy and potions before you attempt to clear the next chamber. 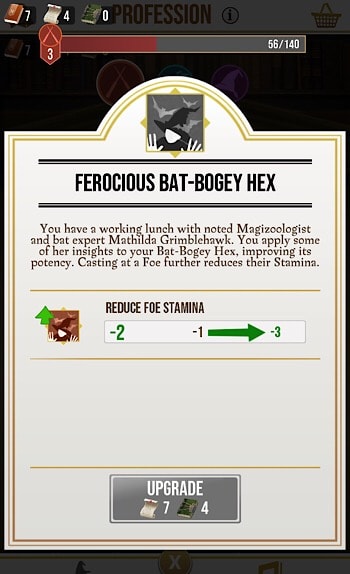 After opening Trace Treasure Trunks you get scrolls, and Wizarding Challenges give you Spell Books. Use those items to level up in the profession that you choose. For example, the Auror profession allows players to learn more about spellcasting, earning updates to increase Stamina and damage done when landing Critical Casts during challenges.

Each player gets 75 spell energy to use to cast spells, with each spell using one spell energy. These do not replenish over time, which is a real bummer. You can get more spell energy from Inns, Greenhouses, and as rewards in Wizarding Challenges, but if you want to play consistently without having to walk all day long you’ll have to spend real money on gold.

In your suitcase, tap on the shopping basket in the top right corner and you’ll be taken to Diagon Alley. Wiseacres has spell energy, keys, and more tools for fighting Dark Magic, Slug & Jiggers has all of your Potions needs, Gringotts is where you can buy gold, and the Featured page has bundles of everything included expansions for your Vault so you can hold more items (don’t forget your complimentary gift at the bottom – free spell energy!). To buy everything – and we mean everything in this game, you’ll need gold.

The Good, the Bad, and the Expensive

Wizards Unite is a fantastic game. For many fans, this is the one thing that was missing in a world where it seemed like everything had been covered. You have the Harry Potter books, movies, video games, and later the “Fantastic Beasts” series, a stage play, theme parks in California and Florida, museums, more merchandise than any one person could ever own, and more. This game is truly immersive and with the use of Portkeys, the player can experience what it’s like to visit actual locations in the wizarding world with the assistance of augmented reality, like Hagrid’s Hut.  As amazing as this app is, there is one glaring downside: the monetization overkill by way of spell energy and gold.

In order to get rarer Foundables, you lure them with Dark Detectors that you’ll purchase with gold. To use the golden cauldron – gold.  Expanding inventory slots – gold. Keys, potions, spell energy, vault extensions, runestones – gold, gold, and more gold. Purchasing gold starts at $.99 for 80 gold, and 12,000 gold for $99.99. Yes, you can spend one hundred real dollars in Wizards Unite for more gold. Crazy, we know. Unfortunately, there’s no way around it for even casual players. Pokémon GO! was hugely successful without needing to monetize every single little thing (in the beginning, it wasn’t monetized at all), and a lot of people are criticizing Warner Bros., who seem to have always had a tendency to make people pay too much.

With that said, this game is still a whole lot of fun. There’s a lot to do, and there are still some areas marked ‘coming soon’ that are waiting to be explored. We truly believe that Wizards Unite could be around for a long time, but how long exactly, is up to Warner Bros.