Microsoft’s Bing has been a surprising success in the search world, even if it’s a long way off challenging Google as top dog. Both companies offer a map service and have been piling in features to entice users, but which is the best?

This is always my main concern, and in terms of basic mouse navigation both Bing and Google Maps are fine. Zooming in and out is fast, whichever view you’re using. Bing has a neat Automatic view mode, which switches views according to how zoomed in you are. This is great, and leaves you in Bing’s excellent Bird’s Eye view, which is much nicer to look at then a simple satellite view.

However, in terms of usability, Google Maps pretty much wipes the floor with Bing from there on in. The maps are better quality and more accurate, and the directions are also improved with Google, according to tests I’ve done. In the image below, I searched for the same directions in both systems, and as you can see they look different. That’s because Bing is taking me to the wrong place, for some reason. This is a good example of the occasional inaccuracy in Bing Maps, which makes it hard to trust overall. 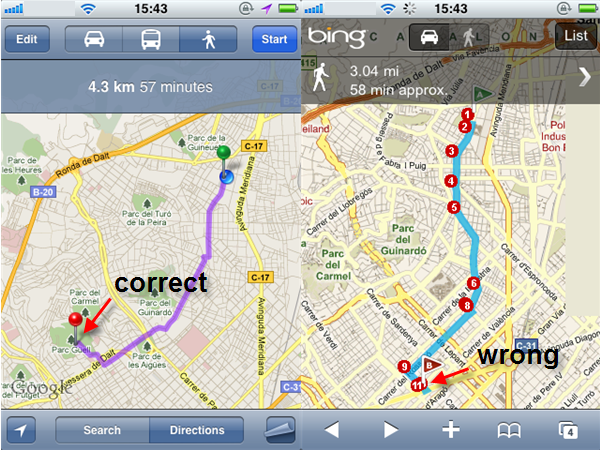 Whether on the mobile or standard site, Google Maps is easier to use and it’s very clear. It’s also much better integrated with Google Search, whereas Bing Maps can be awkward to find in comparison. Overall, Google Maps is much more user-friendly.

Looks are subjective, but there are clear differences between the two. In terms of satellite views, they are comparable, but when you zoom into a map, it’s a different story. With Google Maps, you can install a Google Earth plugin that allows you to move around the 3D models that now make up most major cities. Loading can be laggy, but it gives you a good feel for a place. Bing asks you to install Microsoft Silverlight, which will give you the lovely auto-transition from map to Bird’s Eye view.

Bing has the edge here. Google’s 3D models aren’t everywhere and slow you down, while Bing’s Bird’s Eye view is universal, and really attractive.

Both systems have a basic map view, but I feel the Google one is slightly easier to read, with a bolder set of colors that make following maps that much easier. I’ll go with Google on Maps.

Surprisingly, Streetside – Bing’s answer to Google’s Street View – is really good. Both systems have occasional weird visual ticks, but still are pretty much equal when it comes to usage. Bing’s problem here is coverage. Unless you live in a major US city, you can forget about Streetside. Another win for Google Maps. 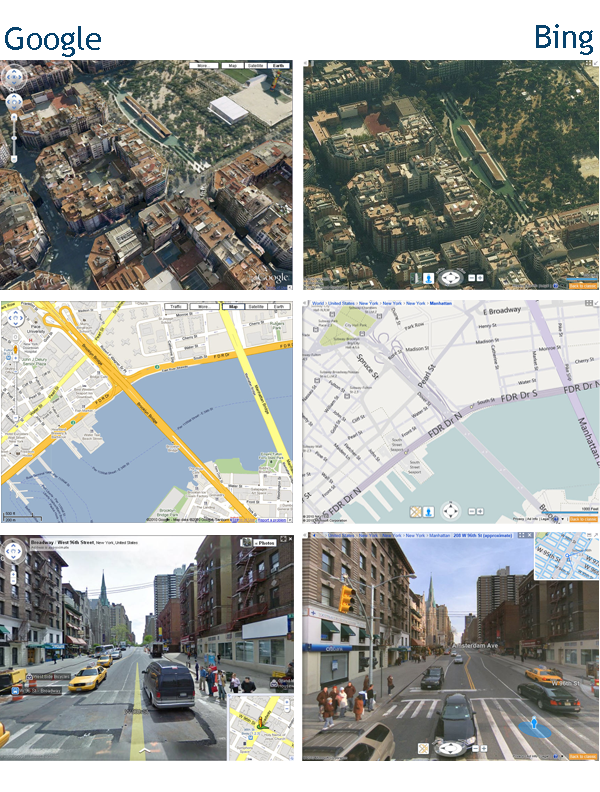 It’s pretty obvious: Google Maps takes the crown. I loved Bing’s Bird’s Eye view, but in everything else it does, Google Maps is just better. Whether its the massive Street View coverage, or the really clear interface, Google Maps is such a polished, well put together web app that Bing has a really long way to catch up.