So you’ve made up your mind and you want to create a blog. The question now is, how are you going to do it? There are many options available, for newbies and experts, for those who prefer to have everything set up and those who like to be in control of every single detail. But besides the traditional blogging platforms like Blogger or WordPress, there are also a couple of alternatives for what is known as micro-blogging – a simpler, easier to update blog, perfect for those who don’t need lots of features.

The two most popular micro-blogging platforms are Tumblr and Posterous. You may think they’re quite similar, but the moment you analyze them in depth, you realize they also have quite remarkable differences. Let’s take a look at both of them and maybe then you’ll know which one suits you best.

The first point you need to compare in these tools is, obviously,  the registration process. Fortunately, signing up for both Tumblr and Posterous is very easy: you only need to provide an email address, a password and the subdomain you’d like to use. Both platforms also allow you to use your own domain name. 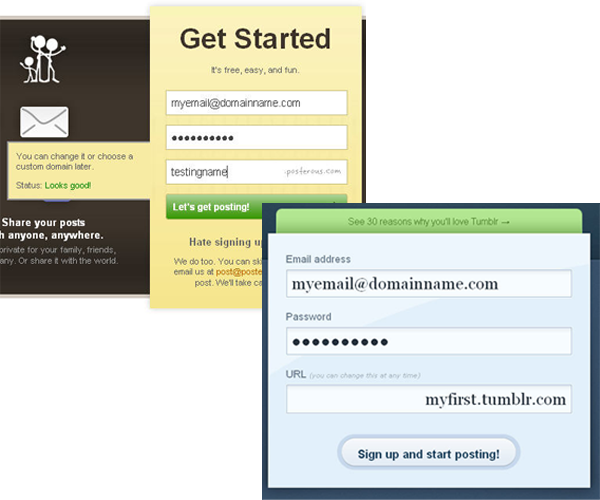 When it comes to publishing, there are two clear tendencies: Tumblr focuses more on publishing via web, while Posterous relies more on email as a way to get your posts online. Both have online editors, but in the case of Tumblr it’s easier to access and use – it even uses different forms depending on the type of content you want to publish: text, photo, quote, link, chat, audio or video.

Posterous, on the other side, has a rich-format text editor to which you can attach any file (photos, videos, audio files or documents) as needed. Both have iPhone apps (though the Posterous one, PicPosterous, is more focused on publishing photos and videos) and Tumblr has also an Android app. To use Posterous from your Android, you can simply email your posts. Oh, and you can also make use of Tumblr and Posterous bookmarklets you get content published on your blog. 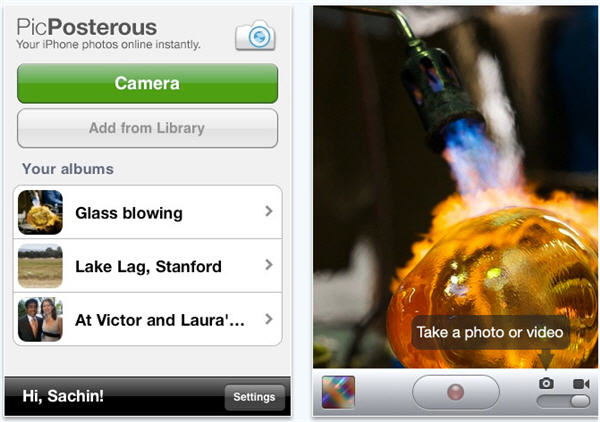 Both Tumblr and Posterous let you add extra pages to your blog, and in the case of Posterous, you can also invite other people as contributors. Tumblr does something similar: it offers you the possibility to allow other people to send you posts, which will be queued in drafts until you approve them. Tumblr does have one thing though that Posterous doesn’t: the Ask me section, a special form where people can ask you all sorts of questions.

Once you start publishing posts, you should consider sharing them on other social networks. Tumblr supports auto-publishing to Twitter and Facebook, and also lets you import the RSS feed. But here it’s clearly beaten by Posterous, which works with a dozen sites: Twitter, Facebook, YouTube, Flickr, Picasa, Vimeo, Tumblr, Blogger, WordPress and more. Also, if your visitors come to your blog via their mobile phones, don’t worry: both Tumblr and Posterous have special theme layouts for mobile devices. 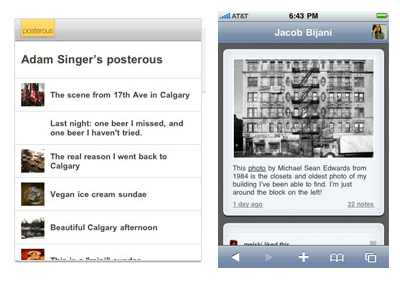 Talking about themes, Tumblr offers many options when it comes to customizing your blog. You can pick a theme (there are free and paid ones to choose from),  tweak a few appearance options and also use your own CSS – if you have the necessary knowledge. Posterous, on the other side, doesn’t fall short of expectations either: it offers themes (though not as many as Tumblr), appearance options and lets you use both CSS and HTML to create your own design.

Finally, when it comes to discover other blogs in the community, Posterous and Tumblr have a different approach. The first one works like any other regular blog, with subscribers, while the latter uses more Twitter-like terms like followers and following – and it also offers a private messaging utility.

Summing up,  both Tumblr and Posterous are great services for people who would like to have a blog without worrying about it too much. Tumblr seems to be simpler in functions and appearance, while Posterous offers more tools and it’s a bit more tech-oriented. I’ve tried both and while I’m happy with Tumblr’s ease of use, I’m also in love with Posterous’s options to post. And as signing up for both is so easy, my advice is to try the two of them – you’ll soon know which one is made for you.