The massive world of Red Dead Redemption 2 is rich with secrets and mysteries for the inquisitive gunslinger to stumble upon. Most of these locations are unmarked and can be missed entirely by those that don’t know where to look. Though there are doubtless more still waiting to be discovered, here are maps to our 5 favorite mysterious and secret locations. 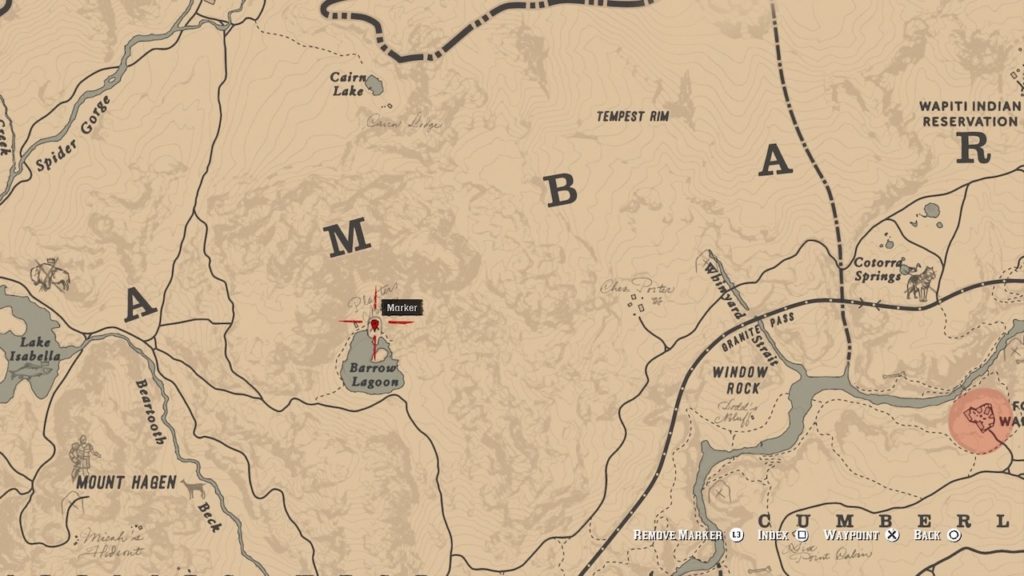 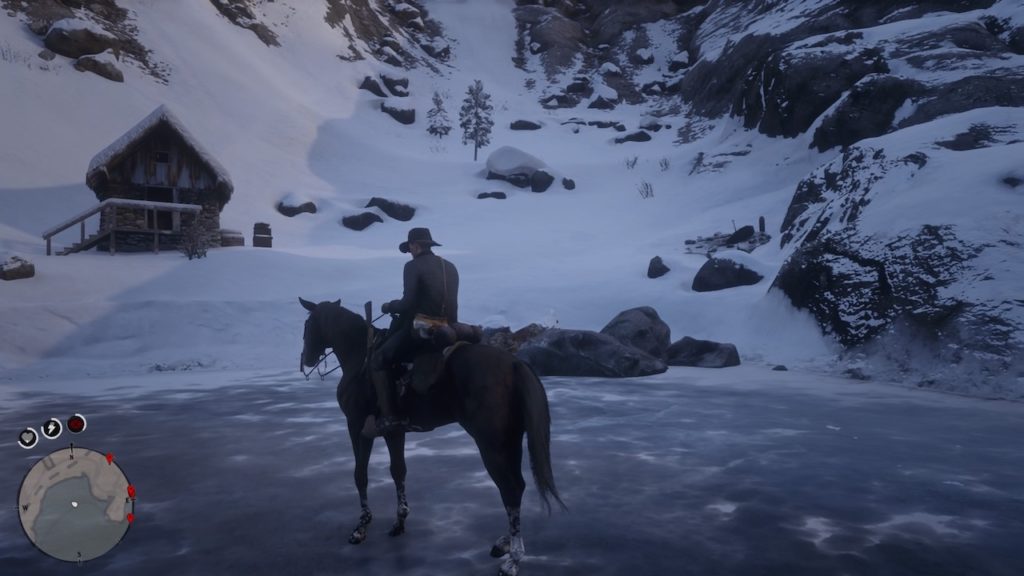 Up north in the snow-covered mountains of Ambarino, players can find this lonely cabin on the shores of the Barrow Lagoon. Though it may look like a nondescript winter retreat from the outside, looking closer reveals a head-scratching mystery. Heading inside the cabin, players can find the Cigarette Card for Felix Hawley, a world-champion ice skater. Next to the card is a newspaper clipping that offers a few sentences about how a skater (presumably Felix) met with an unfortunate accident that cut his career short.

Heading outside, players will find a defaced grave not far from the cabin. The grave belongs to the unfortunate Felix. His coffin has been exhumed and his tombstone vandalized with graffiti that reads “NO ICE IN HELL.” Unfortunately, there’s not much else to find in the way of clues, and the mystery of Felix Hawley leaves more questions than answers. Was his death foul play? Who would dig up his coffin? How did he meet his mysterious “accident?” The answers may still be out there, waiting for a keen-minded player to uncover. 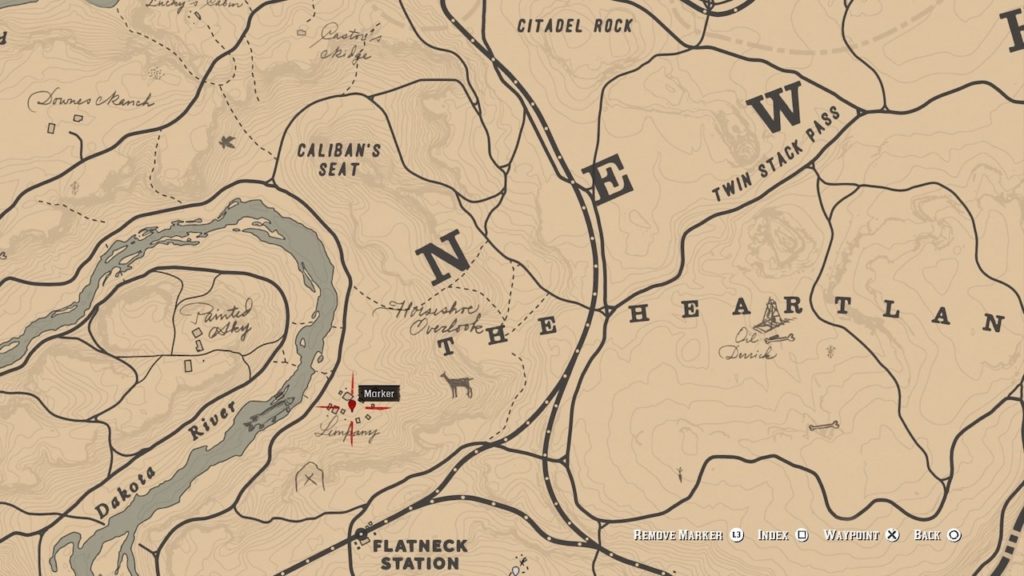 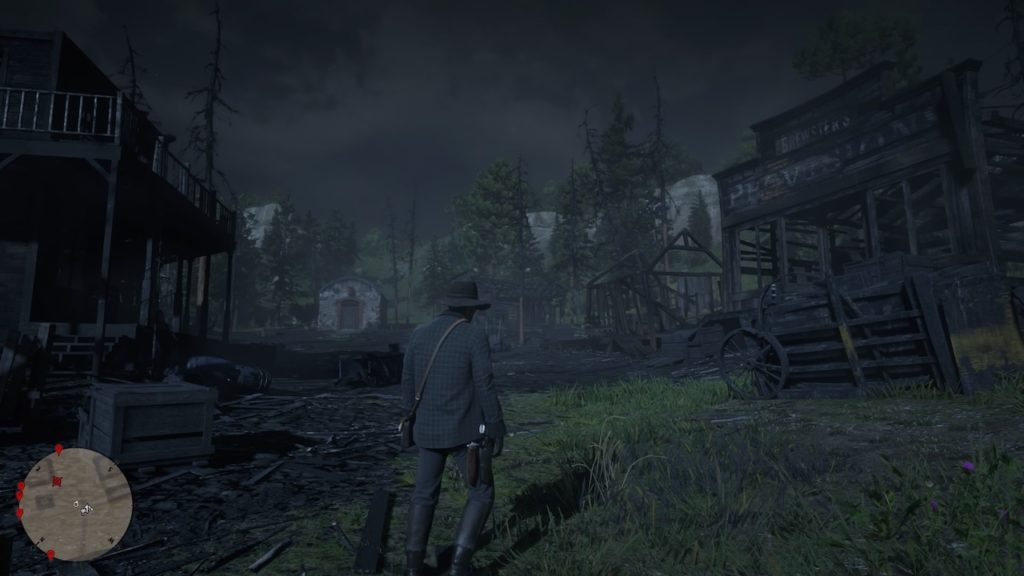 If you head down the hill from Horseshoe Overlook (the spot where the gang camps in the game’s early chapters), you’ll soon spot what looks like a giant black scar amongst the landscape. Approaching will reveal the burned carcass of an entire town. Checking your map will reveal that it was once named Limpany, but aside from that, the town won’t reveal its secrets easily. Exploring won’t reveal much except charred corpses still locked in the town jail and some gold tucked away in a lockbox in the remnants of the Sheriff’s Office. Perhaps Limpany’s secrets went up in smoke as well. 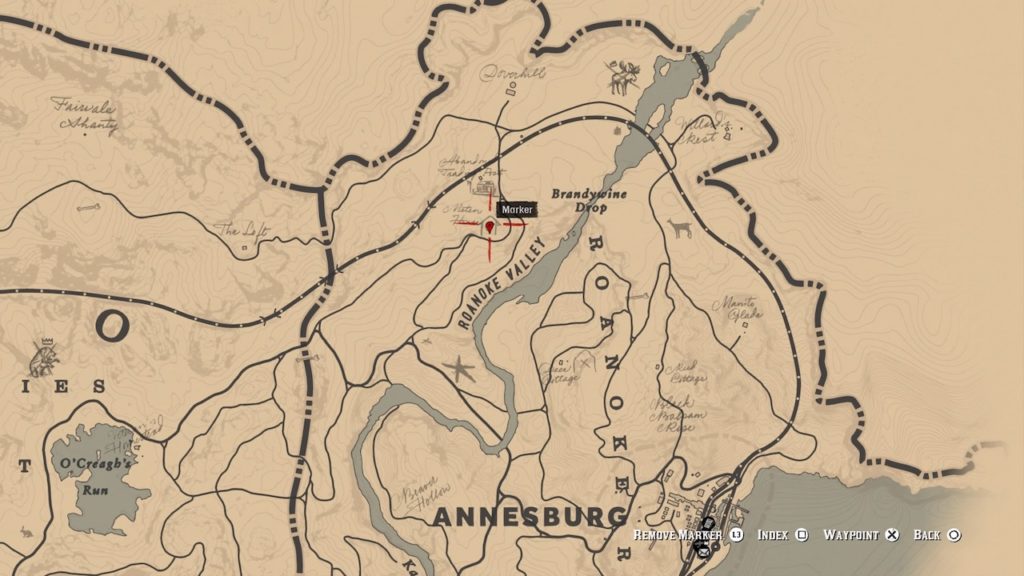 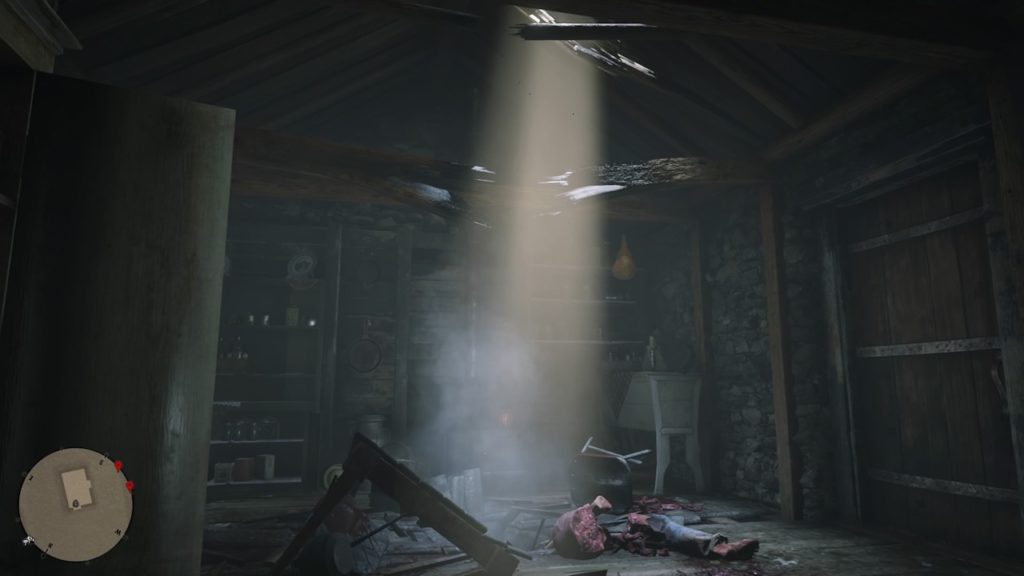 This location houses a bizarre and darkly humorous secret. From the outside, it looks like just another nondescript shack tucked away in the Roanoke Valley. Push open the door, however, and you’ll find what at first appears to be a massacre. Bloody body parts, internal organs, and mangled bodies are strewn about the interior of the cabin, with a giant smoking hole in the center of the destruction. Further examination will reveal that this wasn’t an ordinary explosion. You can actually pick up a meteorite from the hole in the floor. Couple that with the giant hole in the ceiling, and it seems the inhabitants of the cabin met with a literal death from above. 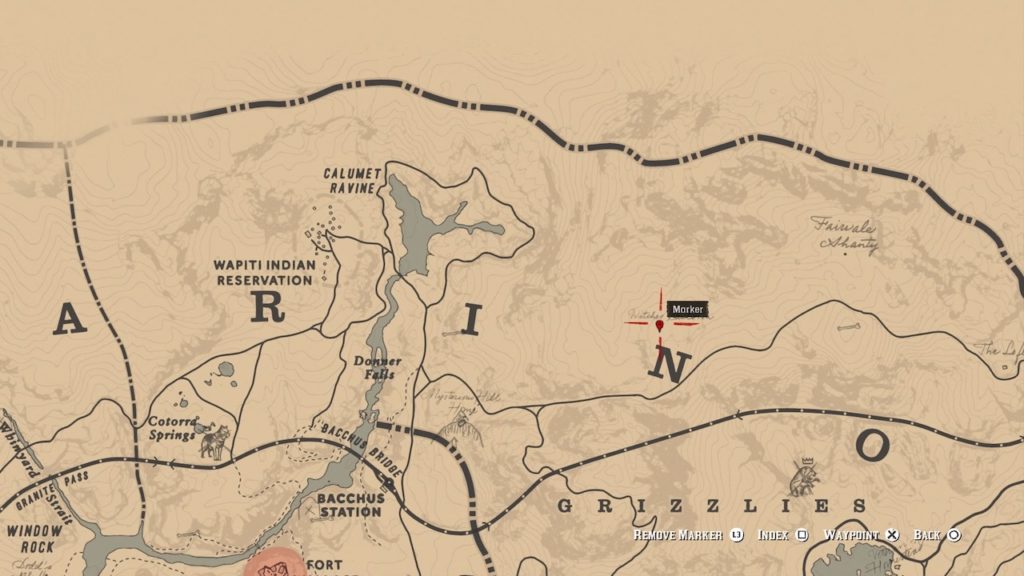 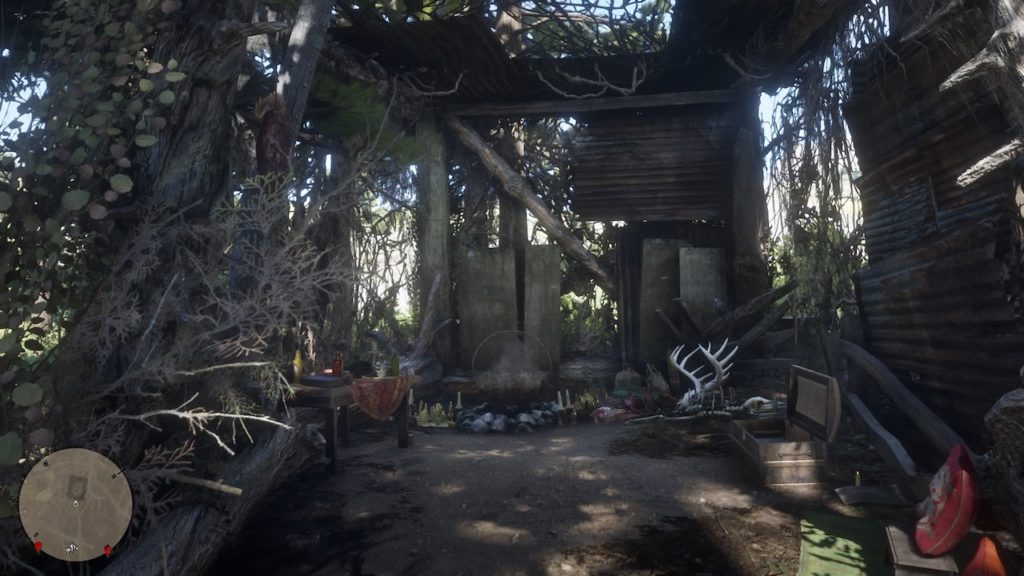 An unsettling experience awaits those who venture out to the northern edges of the map in the Grizzlies. Heading into a grove of trees on the mountainous slopes, you may begin to notice eerie noises and a feeling of discomfort will descend over you. Soon, you’ll find the apparent source of these eerie vibes. A small shack sits among the pines, and heading inside will reveal some macabre sights: animal bones. Skulls. A cawing raven. Tonics and potions scattered about. In the midst of it all sits a boiling cauldron, filled with a murky green liquid. You’ll have to decide, as the raven stares at you with his beady little eyes… will you take a sip of this mysterious witches’ brew? Only you can decide. 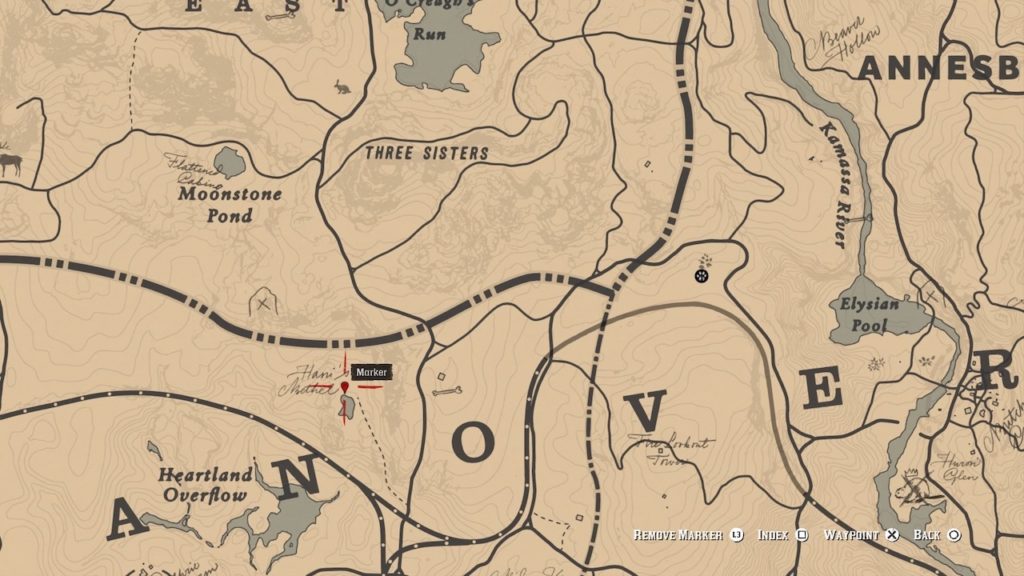 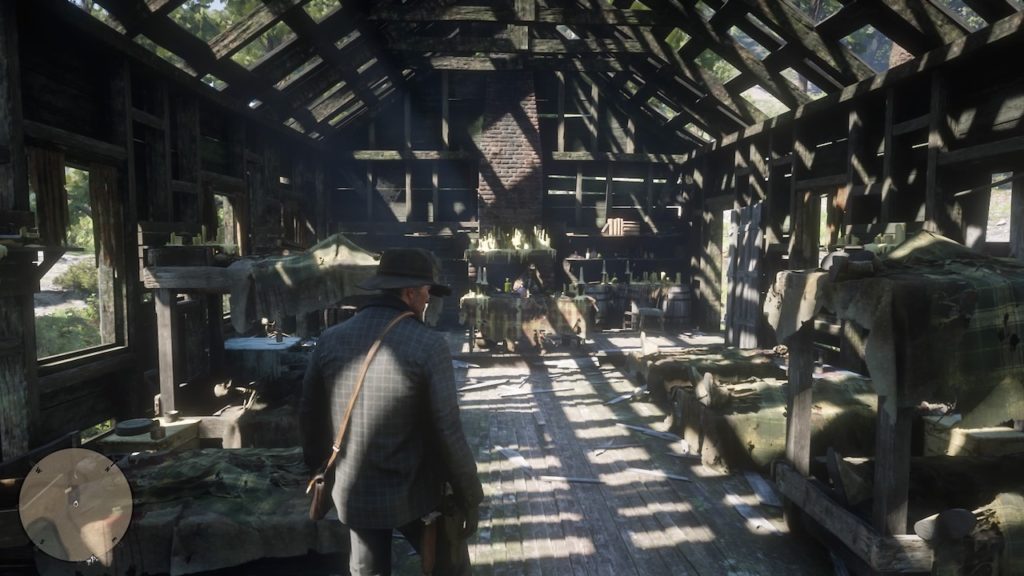 Up to the north of Emerald Ranch on the shores of a small pond sits the remains of a large building dubbed Hani’s Bethel, peacefully falling into ruin. Heading inside will reveal a sight that is decidedly less peaceful. Rows and rows of skeletal corpses lie neatly tucked into rotting beds. Melted candles, skulls, and books are strewn around the interior, and a single skeleton sits at the head of it all, the lord of this house of death. A note clutched in his bony fingers reveals that he answers to a higher power, and this cult has apparently followed him into the great beyond. Follow the instructions in the note and wait in the shack until night falls and you may be in for a close encounter of your own.

Mysteries hide amongst the trees and foothills of Red Dead 2. Will you be the one to solve the ones listed above and find the answers we’ve missed? Or will you stumble onto a mystery of your own, one that no other player has found yet? One thing is for sure: there’s quite a bit left to uncover in the wild, wild west.