Still brutal, still disturbing and still gloriously 80s, Hotline Miami 2: Wrong Number is shaping up to be a worthy sequel to one of the most satisfying indie games of the last few years. 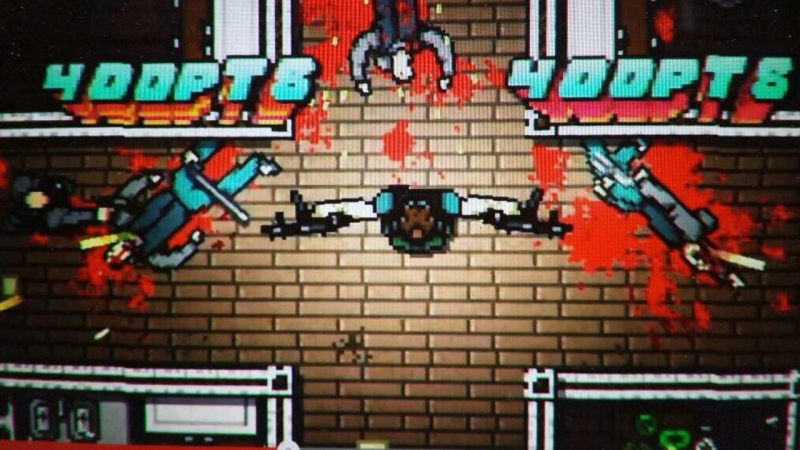 The playable demo we saw at Rezzed 2014 had two levels, and at first glance little has changed: the graphics and controls are immediately recognizable, while the story is still dark and disturbing.

Hotline Miami 2: Wrong Number’s story looks even more challenging than the first. Whereas players were asked ‘do you like hurting other people?’ in the original, Hotline Miami 2: Wrong Number seems to be criticizing the player even more for their murderous actions. It’s a violent game that questions the place of violence in games, as well as the people who play them. On the other hand, it’s an excellent, addictive game.

If you’ve never played the original Hotline Miami, it’s a top down arcade game where you play a character who’s asked to go on murderous missions for reasons that are often unclear. The game is characterized by its high difficulty, retro graphics, and very dark story.

The crazed, drug riddled, and messed up atmosphere of the original feels even more intense this time around. It’s very much an adult game, and one for adults that can also know how to take the toughness of 80s gaming. Frequent deaths and restarts are the order of the day, and each level fluidly mixes a puzzle-like approach with the need for quick thinking and lightning fast reactions.

There are new weapons, like the chain, which is particularly gruesome, and a new soundtrack which feels even better than the excellent original. This, however, isn’t going to convince anyone who didn’t like the first game. In fact, Hotline Miami 2: Wrong Number might even be tougher than the original.

The signature end of level walk through your carnage stays, offering you a sobering reflection of what you’ve done. Each floor is covered in the bloodied corpses you left behind, and it’s an experience that hasn’t lost any of its power.

I was worried before I played that ‘more of the same’ for Hotline Miami 2 would be a disappointment. As it turns out, it’s not. It’s very well designed, and so impressively realized, that it’s just as addictive and engrossing as the original. This should turn out to be a highlight of 2014, and will be released on PC, PS 4 and Vita later this year.

Ever wondered which Pokémon is the least favorite? Now we know