Last week I explained why I’m sticking with Firefox which has generated quite a bit of debate about whether it really is the best browser out there. However, I was very close to ditching Firefox altogether after a frustrating problem which seemed to appear after I first used Tor. Specifically, the problem seemed related to the Torbutton for Firefox which had effectively “broken” Firefox on my Mac.

The reason is because the Tor Button changes Firefox’s proxy preferences when you toggle it on and off. Although most of the time it works quite smoothly, over time it can get “stuck” and permanently change your Firefox proxy settings even when you toggle off Torbutton. The result is that Firefox behaves very erratically sometimes taking ages to load pictures and pages and eventually, may refuse to load pages at all by returning a “Privoxy” error page as happened to me.

Even when I went into Firefox’s proxy settings and restored them to their default settings (i.e. no proxy), as soon as I started browsing, it would automatically switch back again: 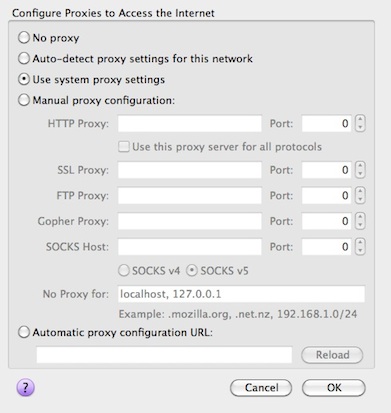 I found that the only solution was to delete my Firefox preferences file completely and allow it to generate a completely clean and new one. Since doing so, Firefox has never worked better for me. Pages load quicker than ever, I never have problems with images not loading anymore and the mysterious proxy changing problem has vanished.

Here’s how to delete it:

On Macs, this is usually found in the path User Folder, Library, Application Support, Firefox:

In Windows, the location varies depending on which version of Windows you are using and instructions can be found here.

Note: There is also a folder named “profile” in the Firefox installation directory that contains program defaults, which some users mistake for the Firefox profile folder that stores user data.

If you find multiple numbered prefs.js files or a read-only “prefs.js.moztmp” file, delete those as well. Don’t worry, when you next re-open Firefox, it will rebuild the prefs.js file from program defaults. This will restore the default preferences and Torbutton should now work correctly again with Firefox.