In Apple’s WWDC 2012 Keynote, Apple announced updates and improvements to existing apps. The biggest announcement that Apple gave was the introduction of its new Maps app. Apple’s step away from Google Maps was a long-known rumor prior to WWDC, but the event allowed Apple to demo it, or what they plan Maps will be when iOS 6 launches in the Fall.

Maps relies on TomTom’s GPS network. Looking through copyright info, Maps also receives data from other services like Digital Globe, Intermap, and Urban Mapping. These different companies are providing information that Maps will use. 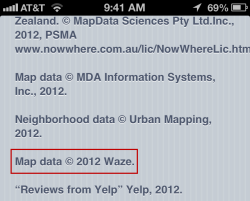 Apple also talked about real-time traffic reports that would be crowdsourced from iPhone users. They didn’t go into details about how the service functions other than information could be pulled from customers.

Looking through the copyright link through Maps, I saw that Apple has a copyright for Waze. Waze is a community-driven social GPS app, which has been on iOS for a while. The new maps will rely on the Waze community to help continuously update traffic information in real-time.

If Apple is implementing Waze services in Maps, their plan of real-time traffic conditions could work.

In standard view, Maps looks like Google Maps, but with less detailed information. Where as Google Maps shows an almost excessive amount of information, Maps focuses on main roads and big locations.

When you pinch and zoom, more information loads like buildings and smaller roads. It doesn’t make the service less usable, but it requires more time to locate points of interest.

It’s possible that Apple will increase detail in the overhead map view before iOS 6 releases. You can change the perspective of the map to the 3D view, but I found only San Francisco actually has building information and the ability to see vector buildings. 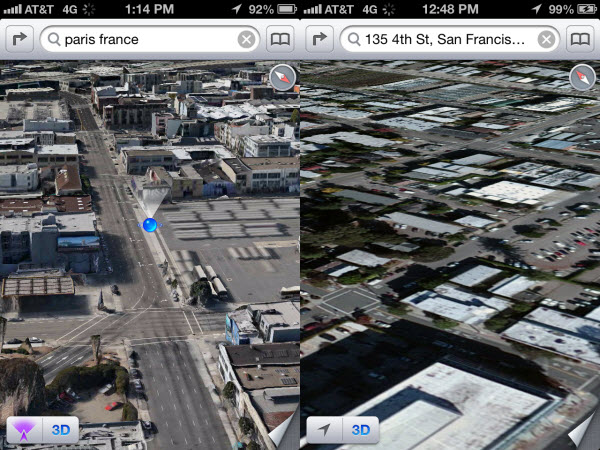 Looking at Berkeley, CA, Maps only contains road names and businesses, but didn’t show any buildings. If Apple is going to roll out Maps as a contender against Google Maps, they’re going to have to update their information substantially.

The keynote also showed 3D satellite view, but again only San Francisco (during my demo) had the ability to show 3D. Berkeley was only a topography map with a satellite image pasted on top. I can’t hold it against Apple because it’s not the finally release, but I thought there would be more information for the local area at least.

While Apple was happy to show off San Francisco in this mode, I found the experience to be sluggish. Loading takes a long time on both Wi-Fi and AT&T’s 4G network. Areas load a framework and then build the area. The satellite images are detailed, but placement over the 3D model looked very uneven. Many buildings appear like images are pasted and where different layers connect look like strange.

I turned on the location settings while riding in a cab to see how Maps functions in motion. In standard view, Maps performs satisfactorily keeping up with the cab. The marker was strange though because the marker would jump off the road into buildings or into the other traffic lane. 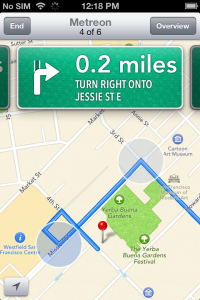 Switching standard view to satellite view, Maps could also keep up with the correct location. It was a little staggered and was slightly delayed. Once I reached red lights, Maps caught up. From satellite view I toggled 3D view.

It was weird to see Maps loading the street while driving, but the marker in Maps didn’t function well. It jumped across the screen as it tried to locate the right place to sit on the screen. I can’t imagine many people using 3D satellite view while driving, but seeing it work was interesting.

Finally, I looked up simple directions from the office to another location in San Francisco. I’m not sure how far development has completed, but I was confused at the directions the app gave me.

One set told me to u-turn on the Bay Bridge, which is impossible, or drive through a mall to reach another location. I’m hoping that these are just bugs, but right now the directions are lacking.

Apple has the groundwork for Maps, but features announced aren’t finished.

Even though I think 3D maps is interesting, there aren’t enough locations to benefit from using the feature right now. Also the integration of Waze is going to be interesting depending on the scale of usage in the app. If they connect to the Waze community and iPhone users simultaneously, real-time traffic could actually be impressive.

Apple Maps is just one part of the iOS 6. In the final build, Maps could become a Google Maps rival, but now it’s not anywhere close.