Between Alexa and Google, we can’t expect everything to remain confidential. 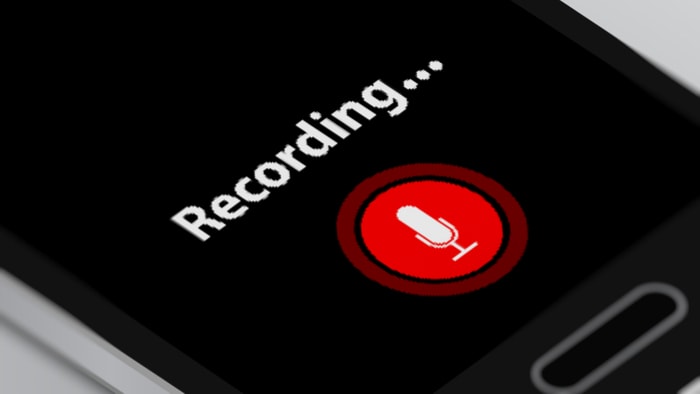 But, your phone? It’s your biggest confidant. Always by your side — between dating apps and panicked disease searches. So what’s all this talk that your phone is spying on you? Is it a conspiracy? Can you turn it off?

There is no shortage of Google searches asking the question, “Is my phone spying on me?” But the answer is not so cut and dry. The usual suspects like Facebook and Google claim they’re not recording your calls. Yet, there are games in the app store that access your microphone, despite not having an audio element included in the gameplay.

Here’s what you need to know before you start speaking in hushed whispers — phone stored in a separate area.

Why people are suddenly paranoid

There are countless videos online where someone will mention a keyword under their breath, “paper towels,” “dog food,” “engagement rings.”

And then, magically, some on-point, targeted ads (hours, days later) that item — something they’ve never mentioned before, starts following them around the web as though they had shopping carts full of the stuff across various websites.

That’s not how it works. According to Dr. Peter Henway, a security consultant from Asterix, your phone is technically listening — in the sense that, it is prepared to answer when you say the magic word: “Okay, Google,” “Hey Siri.” The point is, your phone is listening for those keywords, but it doesn’t start recording until the trigger words cross your lips.

To process your requests, the phone does need to be ready, just in case you talk to it. But, researchers say, that your phone is not actively listening in on your conversations, then using that information to sell you more stuff.

Henway also says that while phones are designed to wait for these trigger words, there may be thousands of unknown triggers that can prompt devices to mine for advertising data.

Facebook is adamant that the company does not listen to your real life conversations in order to load your browser with relevant ads. Your browsing data and Facebook activity has you covered there. In case you’re curious, here’s a brief rundown of how Facebook decides which ads to show you.

FB only listens in when you give the app permission to access the microphone. And, beyond that, the platform only accesses the microphone when you use a feature that requires audio.

And Google, it’s worth pointing out, does record what you say to your Google home. But again, it is supposed to record only what you say after the “okay, Google” trigger. That said, there is the chance that you may inadvertently trigger a recording.

We recommend logging into your Google account. Go to My Activity -> Voice & Audio and from there, you can delete some or all of your activity.

Same goes for Alexa — but there have been some issues. Remember Alexa’s buggy laughter?

So Alexa decided to laugh randomly while I was in the kitchen. Freaked @SnootyJuicer and I out. I thought a kid was laughing behind me. pic.twitter.com/6dblzkiQHp

Or the instance of Alexa sending a recording of a couple’s private conversation to their contacts? The creep factor is there, to be sure.

If you’re concerned about what your Alexa speakers know, it’s easy to delete your query history. See photos: 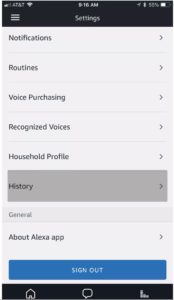 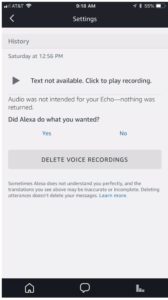 But — users should be aware of which apps have microphone access

Just because Facebook isn’t actively trying to listen in on every call, that doesn’t mean that they, and other applications aren’t picking up on the sounds that happen around the microphone.

Then, it’s also worth mentioning the fact that a lot of apps ask for microphone access to detect TV ads and viewing habits taking place on and around your mobile phone. The New York Times ran a report on the long list of Android Apps that track viewing apps by way of a piece of software called Alphonso — which collects TV viewing data and passes that information along to advertisers.

According to the NYT, there are over 250 games that use Alphonso. Most are Android games, but some are available in the App Store, as well. Alphonso does provide opt-out instructions, and the Times article mentioned that the apps were relatively easy to identify. Apparently, you can type in “Alphonso automated” or “Alphonso software” and it will turn up a long list of games.

If you want to take a pre-emptive approach to games listening in on your media habits, turn off app permissions by taking the following steps:

Go to Settings —> Privacy —> Microphone. Swipe the switch off on the apps you don’t want listening in. 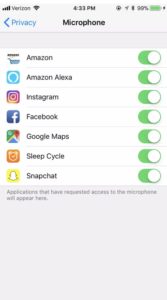 Settings —> Apps & Notifications —> App Info —> App Permission. Then, turn off each app’s access to the microphone.

Look, Facebook, Amazon, and Google are not actively trying to record your conversations, but that doesn’t mean you should blindly trust them to protect your privacy. Triggers aren’t this airtight thing, yet and software gets bugs every now and again.

Again, it pays to check your settings now and then and delete recordings. Also, make sure you look at app permissions when you download something new — otherwise, you could be playing a game that is monitoring your TV habits and recording your voice.

Privacy scandal: Thousands of Android apps have been recording everything you do