If you want to get your hands on the popular Pangea Arcade compilation for Mac then you’d better hurry up because it will soon be moving to the Apple Mac App Store for $4.99.

Pangea Arcade is a fun collection of three arcade games in one: Nucleus, Warheads, and Firefall, all of which are based on the classic arcade games Missile Command, Centipede and Asteroids. Each game has been revamped and modernized for Macs with some pulsating graphics and sound. 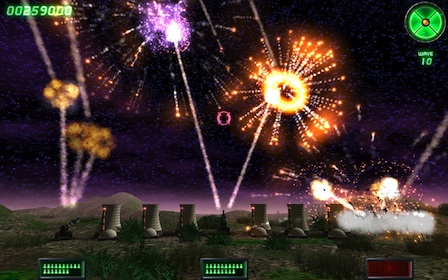 The 3D graphics for all three games are impressive although the gameplay doesn’t quite match up at times. The controls are a bit awkward in Nucelus which makes it hard to play for more than a few minutes without getting frustrated. It’s also not particularly well suited to controlling with a Trackpad.

However, once you get the hang of things, all three games are a lot of fun and will have arcade veterans nostalgic for the old days. The developers even claim that with red and blue tinted glasses, you can view the games in genuine 3D!