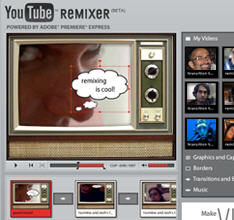 If you wish you could do more than just upload videos to YouTube then you should check-out their new online editor YouTube Remixer. Powered by Adobe Premiere Express, Remixer provides an easy way to add titles, transitions or remix your video with other footage. It lets you assemble your new video in an easy drag-and-drop timeline, and then publish it right back to YouTube.

Reaction to Remixer has been far from positive, though. NewTeeVee notes that it’s almost exactly the same as Photobucket’s Remixer launched in February and doesn’t have half as many features. However, they concede that:

While definitely not for the savvier of video uploaders, the Remixer might be useful for the increasing number of users uploading from their mobile phones.

Another user on the Digg forum was left similarly cold by the compression implications of Remixer:

You get to edit a little crappy 320×240 heavily compressed version of your video, and then after editing it you can’t post it elsewhere without ripping it and re compressing it yet again – you’ll never have a higher quality version of your edited product.

These verdicts are a bit harsh considering most people that use YouTube are not Martin Scorsese or concerned with high resolution results. Most users just want to add a few transitions and in particular, subtitles or text to enhance their videos. I found it very easy to use and the Flash based tutorial on start-up couldn’t make things any clearer.

That said, this has been far too long in coming from YouTube and there are already several good alternatives out there. As already mentioned, Photobucket is perhaps the most notable but there’s also Jumpcut and Eyecut which do exactly the same job.