ACDSee is the kind of application that has been around for years, launching version after version. It began as a fast, simple image viewer and has now evolved into a heavyweight program with lots of tools – indeed, this is exactly what ACDSee has been criticised for of late. In any case, let’s take a closer look and see what lies behind this classic image viewer.

Firstly, you must go through a quite lengthy installation process, which involves providing an email address to unlock the trial if you want to use it for 30 days instead of the 7 allowed by default. The installation also includes the Yahoo! Toolbar but fortunately you can skip this if you don’t want it added to your web browser.

ACDSee sports a quite cluttered interface which is divided into several windows: the directory tree structure on the left, the selected folder’s contents in the central pane and a handy options menu on the right to categorize and rate your pictures. The first time you launch the program, it automatically scans your hard drive in search of images, a process that may take a while if you’re a photo junkie and your hard drive looks like an offline Flickr. 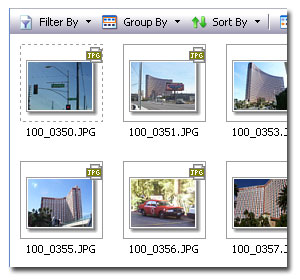 As for organizing photos, ACDSee includes an interesting set of tools that allows you to classify images according to categories (which you can create yourself), ratings and the so-called “auto categories”, based on the image’s EXIF data. There’s also a nice search tool with which you can find any photo on your hard drive in just a few seconds, simply by entering the first few letters of the file’s name. We found this quite handy, as well as the Help system, which seems fairly complete.

As we said before, ACDSee has been criticised for becoming too bloated with unnecessary extra options. However, you can still find useful tools in the edition menu or the create menu. The first one gathers a bunch of basic photo editing utilities such as rotate, flip, resize, crop, red-eye fix, etc. whilst the second one allows you to create a wide range of personal projects with your photos, including slideshows, PDF documents, photo CDs or DVDs and HTML albums.

ACDSee used to be the standard image viewer but in the last few years it has been clearly overtaken by other programs which, despite being simpler, often end up being the user’s choice. In the end, when all you want to do is view photos, you don’t need anything else.