Who is Mysterio in Spider-Man? 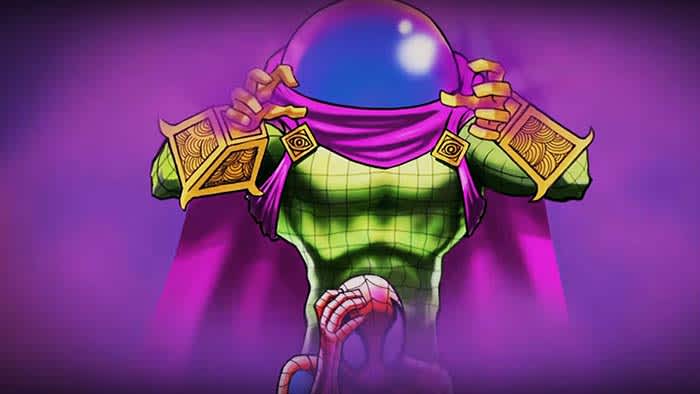 Don’t let his foreboding presence fool you; most of what makes Mysterio threatening is just smoke and mirrors.

The new MCU film “Spider-Man: Far From Home” is giving fans their first on-screen appearance of Mysterio, a staple villain in the world of Spider-Man

Despite “Spider-Man: Far From Home” being Mysterio’s first major on-screen appearance, he has had a rich history in many incarnations of Spider-Man.

Mysterio made his first appearance in 1964 in the comic “The Amazing Spider-Man” Issue #13. He was made by legendary creators Stan Lee and Steve Ditko.

In the comics, Mysterio’s alter-ego is a man named Quentin Beck. Beck is a stuntman and special effects wizard. He had dreams of being a star, but he met with failure at every turn.

Eventually, he came up with a new idea: becoming a superhero. However, Spider-Man was hogging the limelight. As a result, Beck came up with a plan to frame Spider-Man for crimes, and make himself out to be the hero under his new persona, Mysterio. Mysterio claims to be from an alien world, and it is his mission to save the planet (or destroy the plane,t depending on what adaptation you’re checking out).

Mysterio is pretty much a total loser.

Mysterio is never really taken all that seriously in any adaptation. Sure, he causes some mischief and definitely gets on Spidey’s nerves, but he is simply not much of a threat.

Compared to villains like Green Goblin or Venom, Mysterio is a walk in the park. He has a cool costume, but he often lacks the power or evil genius to back it up.

Most of his plans have been done previously by more qualified bad guys. He basically brings the same bag of tricks to each fight and gets his butt kicked each time.

Mysterio’s motivations constantly lie in him trying to make a positive name for himself. He feels like his work has gone unappreciated and that he has been cheated out of fame, fortune, and recognition.

Mysterio has no superpowers. All of his tricks stem from his shrewd mind and homemade gadgets. He’s basically a much less cool Iron Man. His gadgets come from his work in special effects and the movie industry. He often uses smoke and gases to create illusions, disappear, and attack the human mind.

To be completely fair, Mysterio is one of the only people to stop Spider-Man’s Spidey Sense in its tracks.

Eventually, Mysterio becomes one of the founding members of the original Sinister Six. The Sinister Six was a band of villains in the Spider-Verse who made it their goal to defeat Spider-Man. Along with Mysterio, other members included Doctor Octopus, Electro, Kraven the Hunter, Sandman, and Vulture.

However, in their first battle with Spidey, their hubris was their demise. Rather than working together to take him down, the Sinister Six refused to work as a team and instead decided to fight Spider-Man one by one.

Spidey whooped all of them one-by-one while mocking them for not attacking him all at once. Mysterio went on to reappear with the Sinister Six in other comics with pretty much the same results each time.

Plan to defeat Daredevil, and his suicide

After being diagnosed with both lung cancer and an inoperable brain tumor, Mysterio decides that he wants to go out with a swan song. Unfortunately, he discovers that Spider-Man is merely a clone of his real self, so he turns his attention toward Daredevil in the series “Daredevil: Guardian Devil.”

To give him credit, Mysterio actually accomplishes some messed up stuff in this series. He artificially inseminates a 15-year-old girl without her knowing, and works to convince Daredevil that the baby is the antichrist. From there, he fakes an HIV diagnosis for Daredevil’s love-interest Karen Page, blaming it on the antichrist. After that, he drugs Daredevil’s friend Foggy Nelson and frames him for murder. Eventually, Bullseye kills Page at Mysterio’s order.

The rapid downward spiral in Daredevil’s life makes him question his life, morals, and even his Catholic faith.

However, things don’t go well for Mysterio in the end…

Instead, Daredevil mocks Mysterio, stating how Kingpin had tried to break him before, and it didn’t work. He also mentions how Mysterio tried a similar plan before to J. Jonah Jameson, and that didn’t work either. After coming to the conclusion that his life is a joke, Mysterio turns a gun on himself and commits suicide.

Other people who became Mysterio

Although Beck is the quintessential Mysterio in almost every adaptation, a few others have donned the fishbowl helmet.

After the Quentin Beck’s supposed death in the original Spider-Man comics, a man named Danny Berkhart approached J. Jonah Jameson with a proposal.

Berkhart had the idea to fool Spider-Man into thinking that he was the ghost of Mysterio. He even had the old Mysterio’s gadgets. A thrilled Jameson promptly paid him to do so. As you might have guessed, Spidey figures it out and has Berkhart arrested. Jameson gets Berkhart a lawyer as long as he promises not to mention his name to the police.

Francis Klum is probably the weakest iteration of Mysterio, which explains why we haven’t seen him since the early 2000s.

Klum is a mutant who has been abused throughout his entire life. He has teleportation abilities that have caused him more harm than good in his life. After confiding with Black Cat, Spider-Man’s foe-turned-love-interest, Spidey mistakes the meeting as a threat to Black Cat’s life. He proceeds to beat the snot out of Klum and threatens his life. Klum manages to get away, but only after suffering major injuries.

Klum contacts Kingpin, who gives him the late Mysterio’s old costume. Klum gets the idea to attack Spider-Man while in costume to make Spidey think that he is merely fighting Mysterio. However, Klum would then use his teleportation powers to get the upper hand, and then kill Spider-Man. 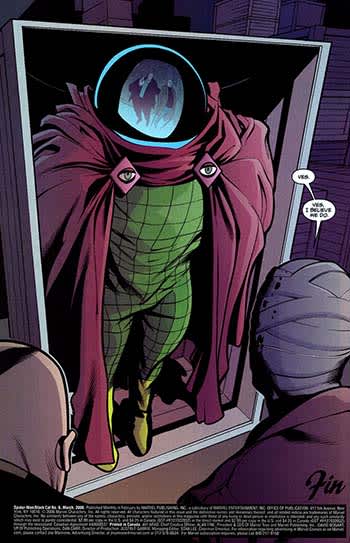 Does his plan work?

Nope! Through a series of weird events, Beck actually reappears after somehow surviving shooting himself in “Daredevil: Guardian Devil.” With two Mysterios running amuck, Spider-Man is prepared for anything and has his guard up. Klum proceeds to not even get a few licks in as Miss Arrow stabs him before he can do anything.

The Mysterio we almost got in ‘Spider-Man 4’

As you well know, the original Spider-Man movie trilogy was made by the ever-so-talented Sam Raimi. In all three films, Raimi had Bruce Campbell, his good friend from the “Evil Dead” films, make a small cameo appearance.

Although the film never saw the light of day, Campbell was supposed to have a much bigger part in “Spider-Man 4.”

What you are looking at above is a piece of art from the official “Spider-Man 4” storyboard. This story was supposed to begin with Spider-Man walking Mysterio into the police station. After the police removed his fishbowl helmet, it was to be revealed that Bruce Campbell was playing Mysterio.

Fans have speculated for years that during the course of the three Raimi Spider-Man films, Campbell had been playing Mysterio the entire time. Furthermore, fans guessed that Mysterio was watching Peter Parker, and was waiting for his moment to strike. Although this has never been confirmed by Raimi, this would have made for Campbell’s funniest cameo yet in the series.

As funny as this would’ve been, we think it would be better to have Campbell’s legendary character Ash make an appearance with the Avengers.

From what we have seen in the trailers, Jake Gyllenhaal’s Mysterio looks similar to the classic Mysterio.

Rather than saying he is from a different planet, this Mysterio is claiming to be from an alternate universe.

As cool as a live-action Spider-Verse would be, we’re guessing that Beck is once again full of it. It’s in his character to be a liar who uses his silver-tongue to come off as cooler than he actually is. However, we will just have to see once the movie is released.