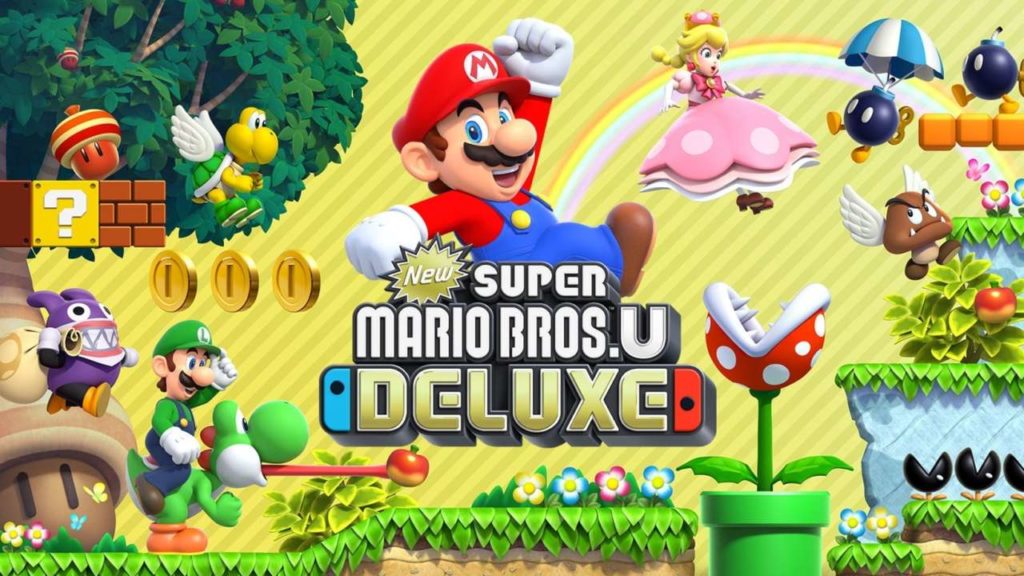 A problem with packaging 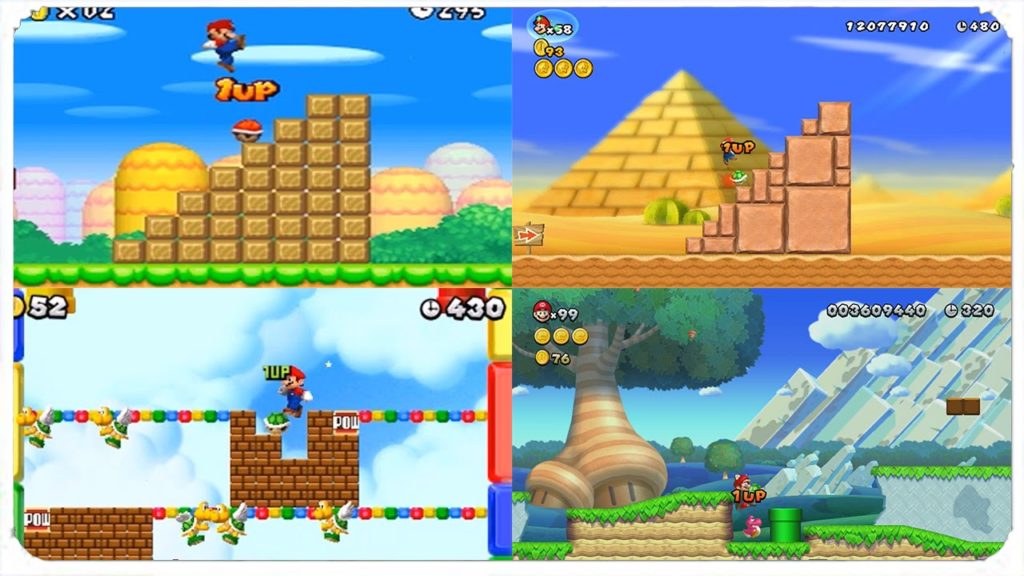 Pretty hard isn’t it? That’s what happens when four games come out with the exact same art style. When the original NSMB released for the DS in 2006, it was legitimately “new.” It was the first time we saw a 2D Mario game with 3D models and the streamlined modern Mario art style. This quickly wore thin as three more games were released with the exact same art style within six years. Sure, the games look nice and colorful, but they look absolutely sterile in comparison to series’ like Donkey Kong Country, Wario Land, or Rayman. Take a look at how the classic 2D Mario games looked in comparison to each other: 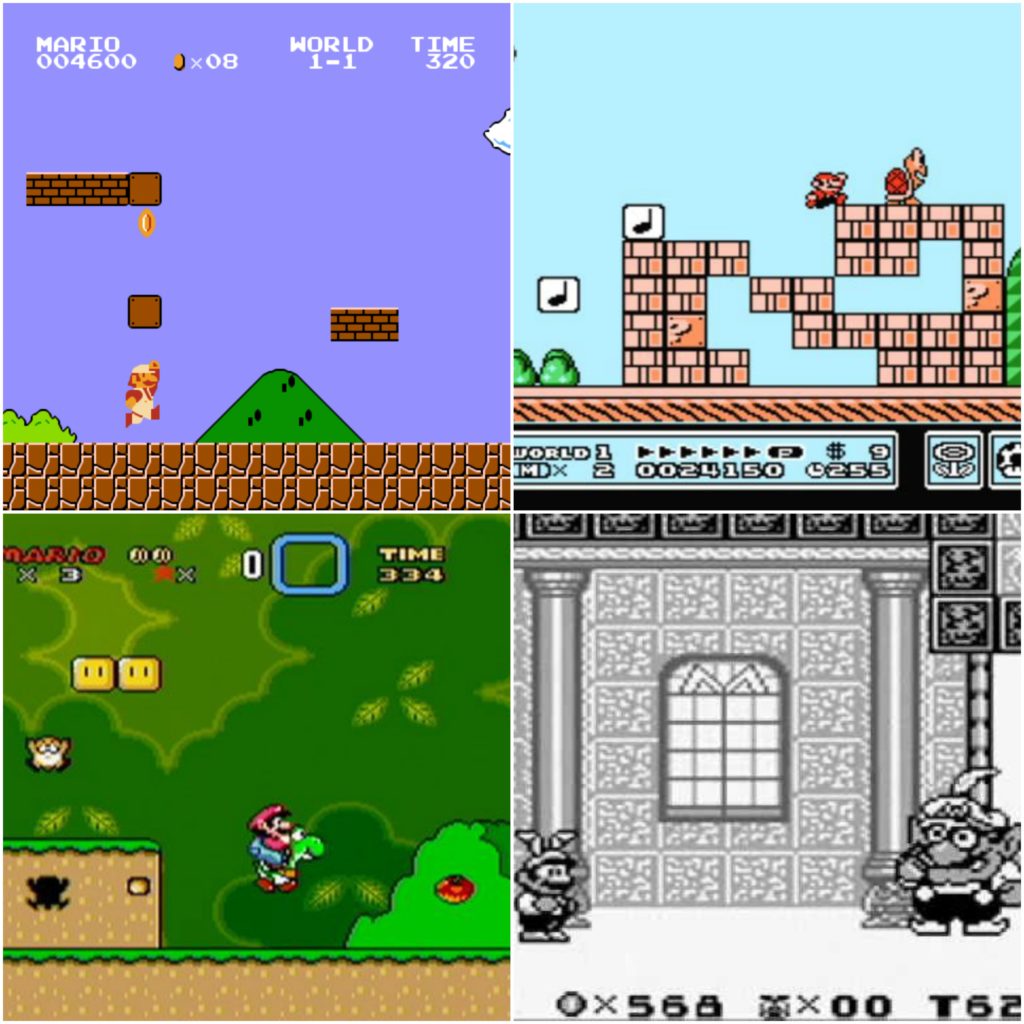 These games were much, much more distinguishable from each other. Like the NSMB games, they appeared on different consoles, but they remained distinct by having different art styles and a degree of stylization in each. By stylization, we mean creating an art style that differs from the standard Mario fare, telling the player instantly that they’re in for a brand new and different experience, with a great example being the Paper Mario series’ storybook aesthetic. Back then, it was exciting to have a new 2D Mario game come out because it was a wholly different experience than the last one. Even the music of the NSMB series has remained very similar throughout the years. Compare the overworld track from the original NSMB to one from NSMBU.

While the upbeat guitars and cheerful “BAH!” sounds that made up NSMB’s soundtracks were different and cute at the time, the style has worn far past thin when it’s still in use over six years later. Aesthetically, the NSMB is comparable to the Madden franchise in how little it evolves throughout the years. It’s highly disappointing that the series shows so little growth and creativity, as other recent Mario games show that Nintendo is still able to make masterful and creative worlds.

How games made the transition from 2D to 3D

Last year’s Super Mario Odyssey saw Nintendo taking plenty of risks with the Mario formula, and with a huge payoff. The game saw Mario exploring a city with realistic humans, exploring an ancient waterfall complete with dinosaurs, bouncing around on stylized polygonal food, and invading Bowser’s samurai castle. The theming of Odyssey is a far cry from NSMB’s standard formula of plains-desert-ice-lava. Even within NSMB, Nintendo has shown flashes of creative brilliance, like with the painted world in NSMBU, but these levels are extremely few and far in between. 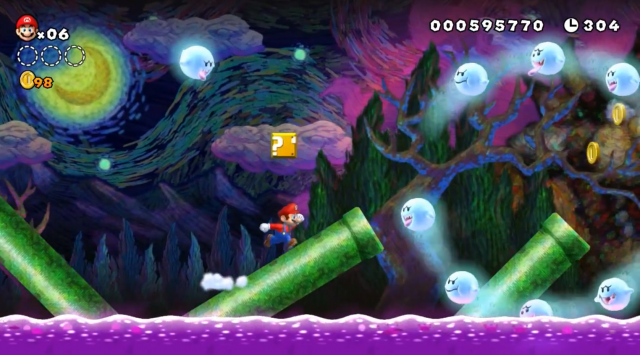 How to shake things up

In this writer’s humble opinion, a nice way Nintendo could shake up the 2D Mario series is with a 2D hand-drawn art style. While making a game like this is extremely time-consuming, the end result is a fluid and detailed looking game that clearly had a lot of passion put into it. Take a look at Wario Land: Shake It! below, as it uses hand-drawn animation and looks absolutely gorgeous.

Wario himself has hundreds of different animations, giving him tons of character and personality. Over the years, Mario has lost a distinct personality, becoming a sanitized and quirkless entity that serves more like a mascot than a character. 2D hand-drawn animation could go a long way in giving Mario and the crazy world he lives in the personality it deserves. Making levels feel like a cohesive, lived-in world as opposed to a series of tiles would add significantly to the atmosphere and theming of the game.

Honestly, gameplay-wise, the 2D Mario series doesn’t need to change much. Throughout the NSMB series, Nintendo has proved that they are still masters of level design and fluid controls. The additional moves like the triple jump, wall jump, and mid-air spin are also all welcome inclusions to Mario’s moveset, and they should definitely stay.

The problem lies more in the gameplay being hampered by safe theming, leading to uncreative level design. Nintendo has also shown that they’re capable of making memorable characters in the Mario universe, as shown by spinoff games like Paper Mario and Mario & Luigi. Including these wackier characters as playable characters, allies, enemies, and bosses would give the game a more unique feel. Ditching the Koopalings and replacing them with original bosses alone would go a long way. Instead of just Mario, Luigi, and a couple of Toads, let players choose Wario, Waluigi, Donkey Kong, or some of the more obscure Mario RPG characters like Geno or Fawful. It’s a shame that NSMB only showcases the blandest and safest side of the Mario universe because the Mushroom Kingdom is actually a rich and colorful world full of interesting characters.

By revamping the aesthetics and exploring the more surreal side of the Mario universe, Nintendo can start getting people excited about 2D Mario games again. The New Super Mario Bros. series, while solid games in their own right, have stifled the Mario series creatively and should be totally revamped. Hopefully, Nintendo switches things up, and the announcement of a new 2D Mario game can be the big deal that it’s supposed to be.

What do you think of these suggestions? Have any of your own? Let us know!

How to Build in Rust in 3 Easy Steps