Chewbacca’s impact on the Star Wars franchise reaches far beyond a mom wearing a mask in her car: 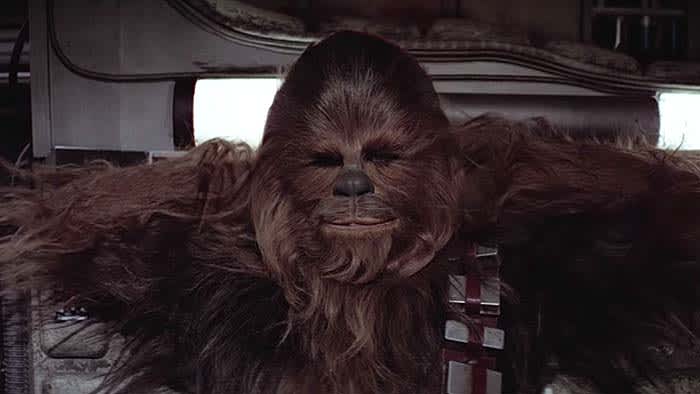 Given the physical burden of the original suit and all the things that nearly hindered the character, it’s incredible that Peter Mayhew was able to give us such an iconic performance.

Han Solo’s copilot was inspired by George Lucas‘s real-life dog. While trying to come up with his character, Lucas was driving in his car with his dog in the passenger sear. Lucas’s own furry copilot was what drew inspiration for the Chewbacca we all know and love.

Making the suit was an arduous task as it was going to have to fully encompass Mayhew’s 7-foot 3-inch body. The suit from the original trilogy was made of yak hair and the hair from Angora goats. At conventions, when fans asked Mayhew how hot it was inside the suit, his typical reply was along the lines of “How hot is it inside a microwave?”

Chewbacca has an iconic roar we all know and love:

The roar was created by sound designer Ben Burtt. No, that sound did not come from Mayhew himself. It actually came from a wide variety of animals including walruses, lions, camels, bears, rabbits, tigers, and badgers.

Chewbacca may seem like a silly character, but Mayhew took the role quite seriously. According to the book “The Making of ‘Star Wars: Empire Strikes Back,'” Mayhew observed monkies and apes. His idea was that Chewbacca would behave closer to them rather than a human being.

The character could’ve been much different

When auditioning for the first film, David Prowse was offered the roles of both Darth Vader and Chewbacca. Obviously, Prowse went with Vader. Prowse is a big dude, standing at 6-foot 6-inches tall. However, that’s only a few inches taller than Harrison Ford. Mayhew stood more than a foot taller than the Han Solo actor, providing greater contrast.

Chewbacca wasn’t always going to be so prominent in the films. The original script only had him on a handful of pages. However, after the creators saw Mayhew in the suit, they wanted more Chewie. Who knows, maybe we wouldn’t have gotten to see him in this classic scene from “Star Wars Episode IV: A New Hope”:

Mayhew’s performance as Chewbacca has resonated throughout the series. When bringing his character the “Star Wars: The Clone Wars,” the creators brought in Mayhew for help. They wanted to do the character justice, so they asked Mayhew how the fuzzball should behave on screen:

From how he walks, to how he keeps his mouth slightly open, Mayhew’s guidance helped bring back the character.

Aside from Mayhew’s performance, Chewbacca as a character had a major impact on the story. This includes the scene from “Return of the Jedi” where he jacked an AT-ST with some Ewoks:

Mayhew’s last performance as Chewbacca was in “Star Wars Episode VII: The Force Awakens.” Since then, he was replaced by Joonas Suotamo. Mayhew taught Suotamo both about the character, and about life.

Mayhew died of a heart attack at the age of 74. He was surrounded by his family in his Texas home. Although the man behind Chewbacca is now one with the Force, his career and impact are still apparent today.

“Death is a natural part of life. Rejoice for those around you who transform into the Force. Mourn them do not. Miss them do not.”