In its latest update, Adobe has added two spectacular new features to Photoshop CC (14.2). In this article, I’m going to explain what they are and what they mean for the future of Photoshop.

As usual, the latest update to Photoshop CC is automatically distributed through the Adobe Cloud. Since early Creative Cloud versions were launched in June 2013, the version numbers have disappeared from the “About” pictures, but they are still there. This time around, Photoshop has been updated to version 14.2.

This adds two exciting new features: printing 3D objects and the change perspective tool. Although neither are essential for normal Photoshop use, it does point to where the star of the Adobe suite is headed.

The most spectacular new feature of the 14.2 update is the ability to retouch and print 3D models. This isn’t entirely revolutionary – Windows 8.1, for example, already allows us to print in 3D – but Adobe makes the process easier through many small improvements to pre-printing, like automatic support structures and mesh repair. 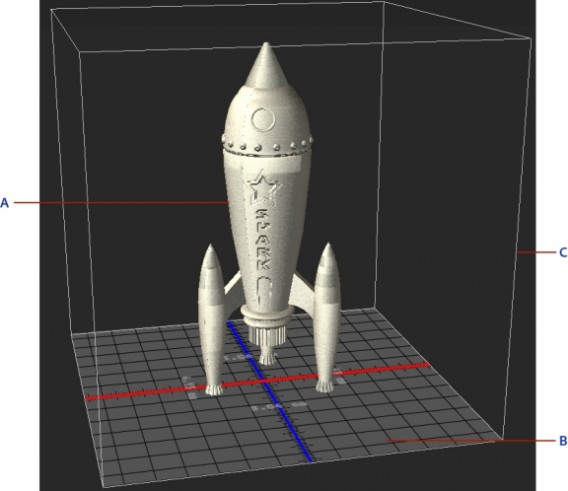 If you enter the 3D workspace and open a model, the 3D Photoshop menu displays a panel called “3D Print Settings.” You can send the models to 3D printers connected via USB (e.g. the excellent Makerbot), or send the model in pages to a remote 3D printer pages like Shapeways.com.

Anyone who tries to draw a parallel between the 2D and 3D printing will notice that the latter has nothing to do with classic printing, but Adobe has endeavored to give it a familiar flavor. You can choose the level of detail (low, medium, high), the scale or size of the printed pattern and textures. There’s even a preview. 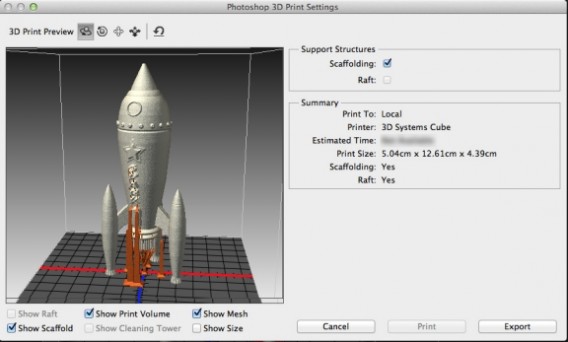 Warp Perspective for a taste of Blade Runner

Another new feature of Photoshop CC is Warp Perspective, a tool to alter the perspective of a photograph. It is spectacular. To use it you just have to define the surfaces by matching points with the vertices of an object and then dragging. Look, for example, what I did with this Rubik’s cube. 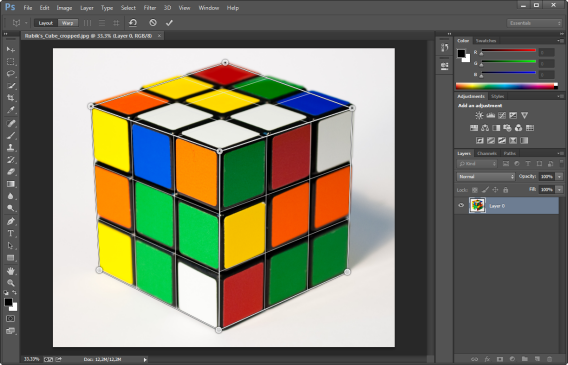 Step 1: mark the surfaces that define the original perspective

Then I dragged it to change the perspective radically. Photoshop CC didn’t let me turn the subject round completely because, obviously, it can’t invent a side that doesn’t exist, but it did let me rotate it quite considerably. Here you can see the result: it only took me a minute. 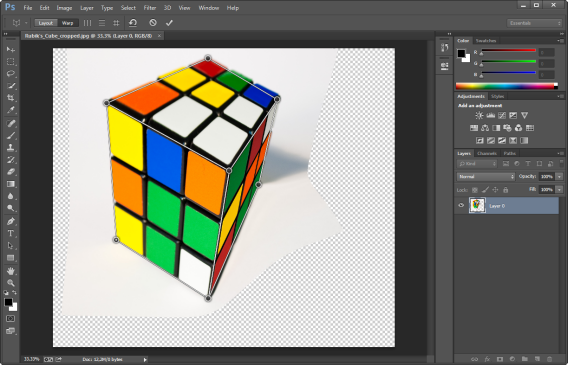 Good news for the undecided: trial periods are restarted

In an unexpected, but nice, turn of events, it’s been announced that all trial periods will restart. Those who tried the first version of Photoshop CC and other products have another 30 days to sink their teeth into the latest features. With the demise of annual releases, this reset makes sense. Hopefully this happens each time CC is updated.

As shown by the official chart, Adobe has already released three versions of its Creative Cloud in less than a year. If opting to restart the one month trial periods every so often, you would get to enjoy Photoshop (and the others) several times a year without paying.

In the 80s, Adobe gave a kickstart to desktop publishing. Years later, after failing to achieve the same with the web, it bought Macromedia and its products. Today it seems to be stumbling through uncharted territory, 3D. By adding 3D printing to Photoshop, it’s beinginning to look like Adobe are having an identify crisis, turning Photoshop into jack of all trades of design, so to speak.

All this, it seems, with the intention of renewing itself amidst a sea of ​​troubles, most recently the theft of millions of user accounts. The criticisms that have rained on Adobe for moving from a traditional model of annual software to the cloud (SaaS, software as a service) have done considerable damage.

Photoshop, the great workhorse of Adobe, has become a tool that serves both to retouch photographs and design prototypes of web pages. It now also lets you put the finishing touches on 3D models before they’re printed. If you want to improve reality, Adobe seems to say, you need Photoshop.

Meanwhile, however, some people wonder if Photoshop perhaps shouldn’t pay more attention to web design, especially since the demise of Fireworks, the formatting tool par excellence. Maybe Adobe wants to forget the web and drown its sorrows in 3D?

What do you think about the latest news from Photoshop CC?