The Stanley Parable, a new version of a Half-Life 2 mod from 2011 has been released on Steam and has an excellent free demo you can try. It’s a hilarious first person game for Windows about exploration and what it means to play games. That may not sound incredible, but it really is great fun to play.

The Stanley Parable demo is impressive in itself, and shows you in a very unusual way why you should play the full game. To explain too much would be to spoil the experience – the demo requires Steam, which you can download here. 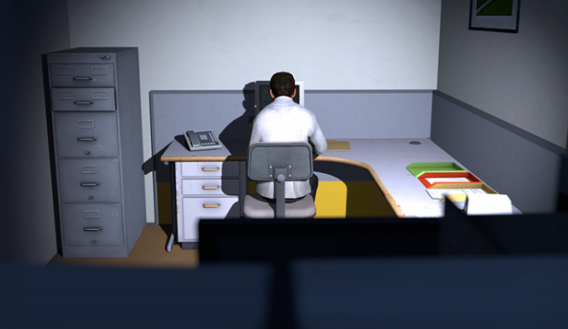 Originally created by Davey Wreden as a Half-Life 2 mod, The Stanley Parable has been re-made with designer William Pugh. It was influenced by games like Half-Life 2 and Bioshock, which had stories that were beginning to ask players why they were doing things, and what choice meant. The Stanley Parable is all about that, and its an unforgettable game.

If you enjoyed playing The Stanley Parable, and I really recommend you try, another developer who plays with similar ideas is Blendo Games. You can play Gravity Bone free, and the also excellent Thirty Flights of Loving is available to buy through Steam.