Like many people, we were disappointed when 2015 finally rolled around and we still had to tie our shoes by hand. We didn’t have hoverboards either, but self-lacing shoes were the least we could’ve gotten.

Four years later, Puma has answered our cries with the Puma Fi. The Fi (standing for fit intelligence) is a self-lacing smart sneaker that is designed for both everyday and athletic use. A video showing off its capabilities and design can be seen below:

The shoes have a clean, understated profile. The jet black color and streamlined design resemble that of a sports car. 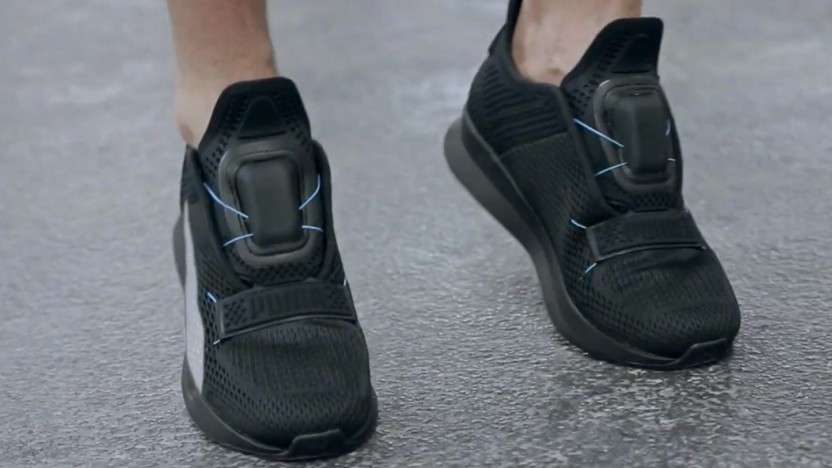 A small micromotor protrudes from the top of the shoe, which uses a touchscreen to tell the tiny fibers within the shoe when to tighten and loosen. Swiping up or down on the shoe causes it to tighten until the cables feel enough tension, though the tightness can be adjusted with additional swipes. When tightening, the micromotors make a satisfying whirring sound, not unlike Marty McFly’s Air Mags. By placing the tightening mechanism on top of the shoe as opposed to in the sole, Puma hopes to let the shoe feel more natural than other smart sneakers.

The shoes are water-resistant but unfortunately not waterproof. The charge on the sneakers lasts around five-to-seven days according to Puma, and can be charged with either a wireless Qi pad or by removing the batteries and placing them in a charging case (similar to Air Pods).

While the shoes won’t be available commercially until Spring 2020, Puma is offering pairs for free in an open beta test. Puma has said to stay tuned to its Pumatrac app for an announcement as to when to sign up for the beta test. Once released to the market, the shoes will be priced at $330.

Top FIFA soccer games to enjoy during the World Cup