DC’s “Suicide Squad” and “Justice League” set the Extended Universe back a few notches. In fact, those two movies destroyed all notches gained by the excellent “Wonder Woman” film that came before. A lot of trust was lost. Until…

After a decent box office performance by “Aquaman,” “Shazam” dropped like a lightning bolt (or a defibrillator) into theaters and reanimated DC. The film has racked up a surprising $356 million worldwide.

Here’s the crazy part: Shazam doesn’t feel like the other DC movies. In fact, it doesn’t even feel like a Marvel formula ripoff. Somehow, director David F. Sandberg managed to keep Earth’s mightiest human original and we want to know how!

We want to know…

First things first, take a look at the central character.

Billy Batson (Asher Angel) is a foster home runaway searching for his biological mother. After his most recent escape shenanigans, he joins a home with Freddy (Jack Dylan Grazer) and a family of other orphans.

During his stay, he encounters an ancient wizard who gives him the power to fight the world’s evils: he can become a superhero (formerly known as Captain Marvel, BTW) by saying the word “Shazam!”

But before all the hero work and derring-do, Billy’s character comes through. He’s a kid, he has problems, he has dreams. He’s relatable.

“Justice League,” with many times the budget and a cast of legitimately great actors, managed to turn some of DC’s most recognizable heroes into walking bricks. “Shazam!” doesn’t make the same mistake.

A superhero is only as good as their villain.

Shazam distinguishes itself from both DC and Marvel in this respect, thanks to the character Dr. Thaddeus Sivana, played by Mark Strong.

How is he different from DC villains? Once again, he actually has character. Sure, it’s a general “angry bad guy” character, but the backstory used to explain his disposition won’t disappoint you! [Spoiler coming] In the opening scene, we actually felt his pain at being verbally abused by brother and father, then called unworthy by the wizard Shazam. Which leads to our next point:

Marvel has developed a habit of creating the “self-righteous villain.” In “Avengers: Infinity War,” Thanos believed so much in his plan to kill off half the universe and argued for the idea so well, that a large part of the internet began debating for his side. They even created a small Reddit phenomenon within the subreddit r/thanosdidnothingwrong.

Silvana, however, expertly walks a fine line: the villain who knows they’re being evil but has a compelling reason for doing so. Not many movies pull that off, but Shazam made it work. 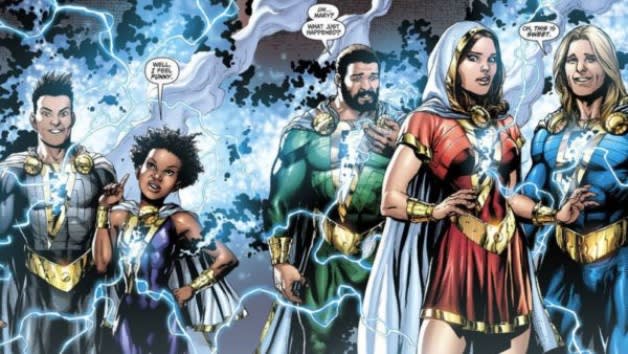 Make way for the ShazamFam!

Every movie has a story at its heart. “Jurassic Park” was really about Dr. Grant learning he wants to be a father. “Die Hard” is about a man falling in love with his wife all over again. “Shazam!” tells the story of a lonely boy finding a place that he can call home, a group of people he can call a family.

This comes to a satisfying conclusion when the ShazamFam appears, because not only can Billy become a hero by shouting Shazam at any time, his new family can also turn into superheroes by touching the lightning bolt on his chest and saying The Name!

This works for a few reasons: one, unlike many other movies, the super power itself ties into the theme of being stronger together.

Second, there’s an unusual message here: anyone can be a part of the family. DC and Marvel certainly have normal humans in their world, but unless you have super powers or “special skills” like Batman or Black Widow, you should stay away from the fight! Shazam lets us know even the most outcast group of harmless kids can become heroes together.

Shazam’s humor has been described as “effortless” and it’s a fitting description: the movie pulls off laughs that don’t feel campy or written down to a punchline. As an example…

While riding on the subway, the wizard Shazam transports Billy to his lair. Before stepping off into the strange cavern, Billy checks the subway map. You know, just in case the ancient headquarters of world-defending magicians is a normal stop for the daily business commute.

The surprisingly human moment in the unusual circumstances is far removed from the prolific, sad one-liners of “Justice League.”

Finally, the time has come for some heavy-hitting realtalk: fandoms can ruin shows with their expectations. Sometimes, a movie isn’t bad, it’s just not what the die-hard followers wanted.

We’re looking at you, Super Fans.

Directors feel the need to make something new and different. Rather than make Superman a Boy Scout, “Man of Steel” turned him into a reluctant killer. To “improve” on the gritty Nolan series, “Justice League” Batman became a ruthless warlord for justice. With so much film history, so many memories of past Batmen and Supermen, it’s hard to please everyone.

Here, Shazam was only known in comic books, so his movie interpretation was fair game! There’s no way a new Batman could’ve had this fun, childish whimsy after Christian Bale played the role so well. It’s hard for old, hashed-out heroes to get a new take or a fresh start. Shazam’s creators had an opportunity to make something new and they made the most of it!

Are you worthy enough to wield Thor’s hammer?

We believe these are a few of the main reasons Shazam removed itself from both DC and Marvel tropes. Of course, it’s good to remember Hollywood productions rise from the collective imagination of hundreds of creators; however, we particularly enjoyed their excellent hero, villain, theme, humor, and exploration of a new, promising caped crusader.

Thanks to Wonder Woman, Aquaman, and Shazam, DC has new direction and a fresh breath of air. Here’s hoping they use it well!

How to Delete Tik Tok Videos in 3 Easy Steps