When I played Mediocre’s Sprinkle a long time ago (August 2011 apparently), I was absorbed with the puzzle game because it used water physics as its core gameplay mechanic. It was easy to get addicted because the levels became gradually more challenging as you progressed.

After Granny Smith, Mediocre returned to the Sprinkle world with Sprinkle Islands. Instead of a simple sequel, Sprinkle Islands expands by introducing moveable fire trucks. Before you solved a level with a stationary fire truck using the water hose, Sprinkle Islands has different sections in each level to solve while trying to not use up the limited water supply. 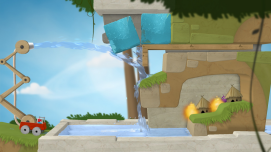 I wasn’t expecting a difficult game since I breezed past the first few levels with no problem. Then near the end of the first (of four) islands, Sprinkle Islands took a turn. 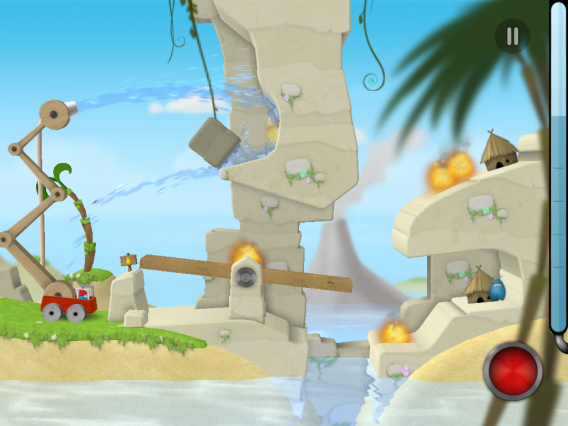 I’m not excellent at puzzle games; I would call myself average, but Sprinkle Islands did something to me rather quickly. It made me feel dumb.

The first levels are designed to reintroduce the gameplay mechanics like spraying water on fires helps extinguish them. Fires will spread if you don’t douse enough water to put them out. It’s the same design as the original Sprinkle. You also use the environment to passively guide the water to reach covered areas. The game still has excellent water physics that made the original stand out.

With the fire hose, you also push rocks, block of ice, and knock over obstacles to get the water onto the fires. The limited amount of water increases the difficulty, especially if you mess up one of the environmental puzzles. Early levels aren’t of much concern because they don’t require a lot of water, but the difficulty isn’t apparent until you’ve run out of water.

The other change is that there are boss battles at the end of each island. I reached the bosses at the end of the first and second island and they’re not too difficult to defeat. Now I’m curious about the third and fourth island bosses. 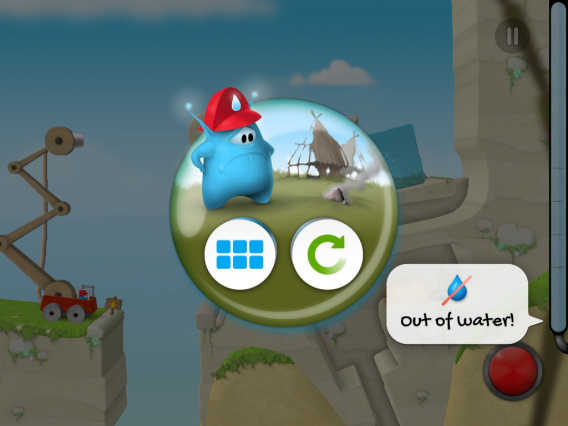 Getting past the first island took some time, especially level 8. But the moment I started the first level on the second island, I knew I was in trouble.

The puzzles are more involved and challenging. It’s not just about getting water to the fire. I had to push blocks of rock or ice to use as platforms for water to flow over. Or I had to manipulate buttons to open bridges for access. These require a lot of precision and knowledge of how water will travel. Since the water is controlled by physics, it was common for me to flood an area and waste a big portion of my limited supply. Water will form pools in contained environments and will spray if it flies over long distances, something to keep in mind every moment.

Moving into the third island, which takes place in a cave, the puzzles require more fine controls. Some rocks have to be manipulated carefully or they fall into water, causing me to restart. Sprinkle Islands never penalizes you when manipulating the environment. The only concerns are the water supply and the fire spreading and destroying the huts in the level. 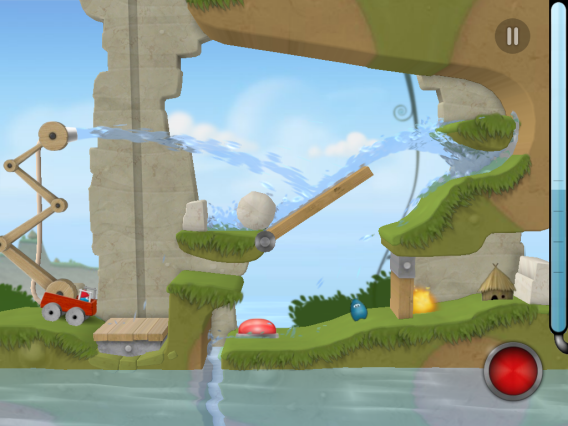 Sprinkle never felt that challenging because there was only one area I had to worry about. The way the levels work in Sprinkle Islands, I was never sure what else I would be confronted with and I usually didn’t have a lot of water left. But there’s a huge feeling of accomplishment after completing a level.

Or it could just be that I’m horrible at Sprinkle Islands.

Any way you look at it, Sprinkle Islands keeps the core gameplay of the original game and adds some great new elements like expanded levels and boss fights. Releasing on Android and iOS on July 11, it’s a great puzzle game that improves on the original.