New photos from the set of “Star Wars: The Rise of Skywalker” show hints that the franchise is moving back in the right direction.

After last month’s trailer hinted at the return of Emperor Palpatine and unveiled the ominous full title of the final film in the trilogy, fans have clamored for more info.

Although the trailer was cool, these photos show that the movie will bring us back to J.J. Abrams’s original idea. You know… before Rian Johnson divided the fanbase with “Star Wars: The Last Jedi.”

Probably the most interesting photo from the set was this one of the Knights of Ren. The films haven’t explained who they are, and what they’re doing. What we do know is that Kylo Ren is their leader, so these guys are probably also super evil.

The main issue is that they have done NOTHING in the movies. In J.J. Abrams essentially gift-wrapped these cool side-characters for us, and Rian Johnson proceeded to ignore them.

Hopefully, this photo means that they will be playing a bigger role, and not just a brief appearance.

For fans of the series, this photo is bittersweet in several ways. Although it is cool to see Lando Calrissian back in the Millenium Falcon, he’s only there because Han Solo is dead.

Although we are glad Lando is back in the picture, we would have loved to see him reunite with Han after all these years. At the very least, we would have wanted to see a reunion with Han, Luke, and Leia, but c’est la vie.

The second sad thing in this photo is that we know that we are not seeing Peter Mayhew behind Chewbacca’s mask. Mayhew died earlier this month, and Joonas Suotamo has played the role since.

This photo showed us a bit more of the new character Jannah, played by Naomi Ackie. Given that her outfit resembles Lando’s, many fans have speculated that she might be his daughter.

When asked about it in an interview with Stephen Cobert, Ackie said, “Lando is a very charming man, so he could have children all over the universe, that’s all I’m saying.”

Inside that cool helmet is none other than Keri Russell, playing her character Zorri Bliss in the “Thieves’ Quarter of the snow-dusted world Kijimi.” Beyond that, we don’t know anything about the character. However, the costume does look cool. We also like those two weapons she has in both her holsters. Hopefully, we will get to see her in some cool action scenes with those.

Domhnall Gleeson returns to the franchise as General Hux, but he’s not alone. Richard E. Grant will be playing Allegiant General Pryde, according to an article from Vanity Fair.

These two characters are NOT related, but they do seem to be working together to take down the Resistance. Maybe we will see General Pryde give a Nazi-esque speech like Hux’s from Force Awakens.

In this photo, we see Rey, Chewbacca, and BB-8 racing away in what looks similar to a deconstructed pod racer.  Is there going to be pod racing in this movie? Probably not, but it is might be a cool little callback.

As we all expected to see, Rey and Kylo Ren are going to duke it out again. The first time these two fought, they were in a snowy forest in the midst of a blizzard. This time, their tension appears to have melted the ice around them creating a literal and metaphorical wave of emotions.

Here, we get to see C-3PO get some final touches before his close-up.

Ya know, we have seen a lot of photos and footage from this desert planet. We can’t help but think this might be Tatooine from the original films, or maybe Jakku from “The Force Awakens.”

This photo of John Williams with his orchestra means that there will at least be one good thing in this film: the music.

His music is just as synonymous with the franchise as the Jedi and Darth Vader. The projection of Leia in the background of the shot hopefully means that we will get to hear his score “Han Solo and the Princess” harmoniously played once again.

Uh, who are these guys?

Well, it wouldn’t be Star Wars without some weird aliens. Actually, the one in the bottom right almost resembles the Tusken Raiders from the first film. This is further evidence that we might be back on Tatooine.

These guys are far from the weirdest aliens we’ve seen in the franchise. Remember some of those guys from the famous cantina scene?

The one we’ve been waiting for… 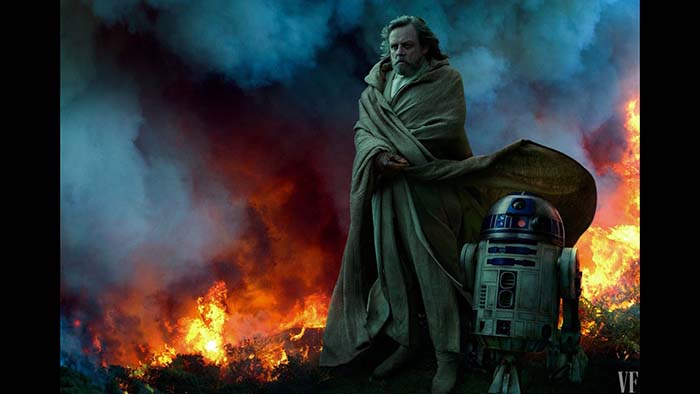 One of the things fans felt was the most egregious in Last Jedi was the handling of Luke Skywalker.

We were left wondering, “If he just wanted to die, why did he leave a map of how to find him.” Also, giving up is simply not the Jedi way.

This photo and the actual title of the film both suggest that Luke’s journey is not yet over. Hopefully, we will get to see Luke do some more cool Jedi stuff, and do less alien milking.

I’ve (still) got a bad feeling about this

We’re setting our standards to “low” for this one. The movie looks like it is going to be playing a lot of clean-up from “The Last Jedi.”

What do you think? Are we in for a fantastic finale?

Frame-by-frame analysis of the Rise of Skywalker trailer