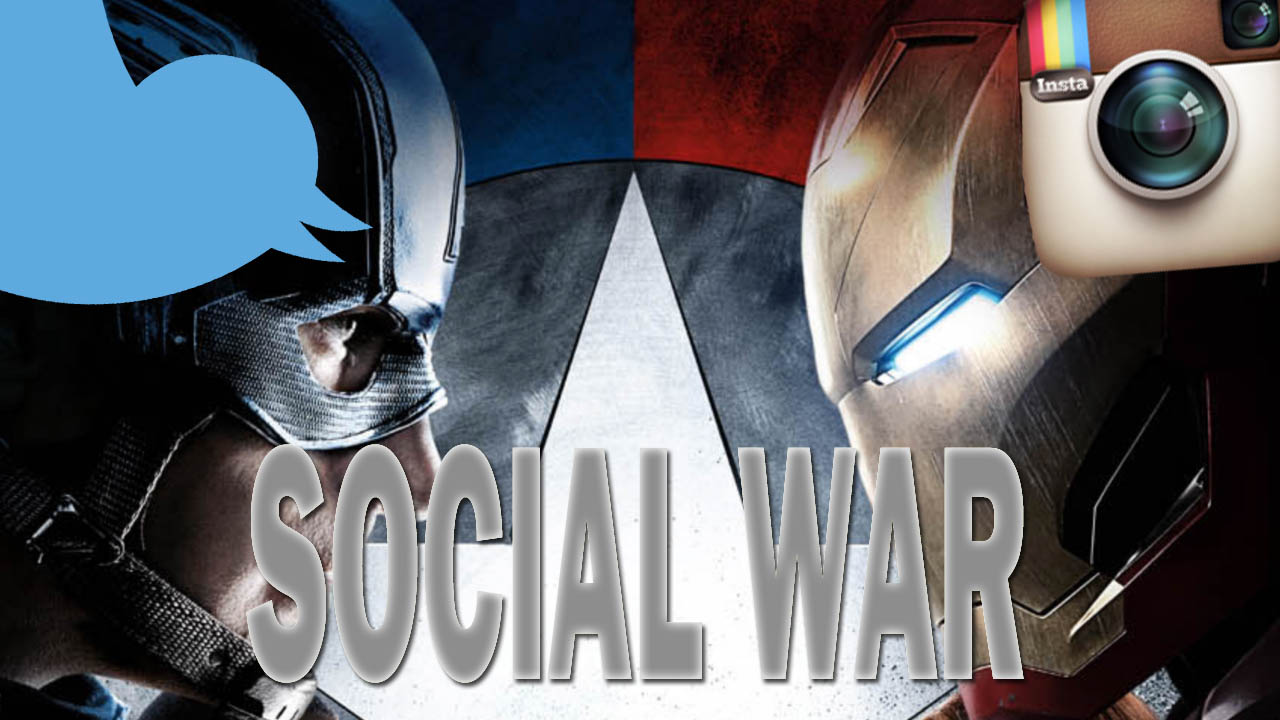 When they aren’t saving the world or engaged in a Civil War, what do the heroic Avengers of the Marvel Cinematic Universe (MCU) get up to? Well, if the internet is to be believed, much the same of us: chatting over WhatsApp, Tweeting each other, getting into trouble on social media, and attending too many meetings at work.

Much like their planet avenging shenanigans, they manage to do all this with a good deal of humor. Luckily, thanks to the social-beauty of Facebook, Instagram, Twitter, and a possible hack the Avengers’s WhatsApp accounts (Tony should really look into that) we have been able to find some of the best to share.

The first rule of Facebook: it doesn’t matter how “super” your friends are, the chances are they will be jerks to you when you post about important life events.

Oddly, this feels like the kind of mistake Steve Rogers would make, so its strange to see the more socially savvy Tony make it here. 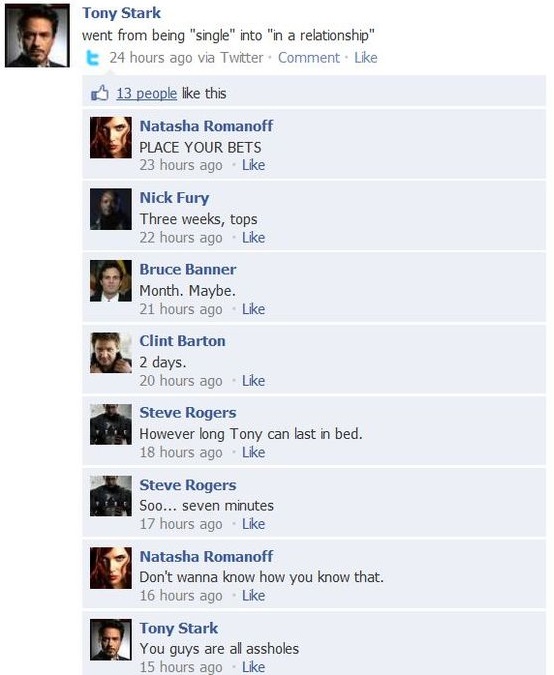 Source: Conversations in Marvel – check them out

Talking of which, Captain America making exactly that same mistake here. Sharing images from your youth on any social media platform is generally a mistake. Really Cap should just be happy Iron Man is so far the only person to weigh in on his appearance. 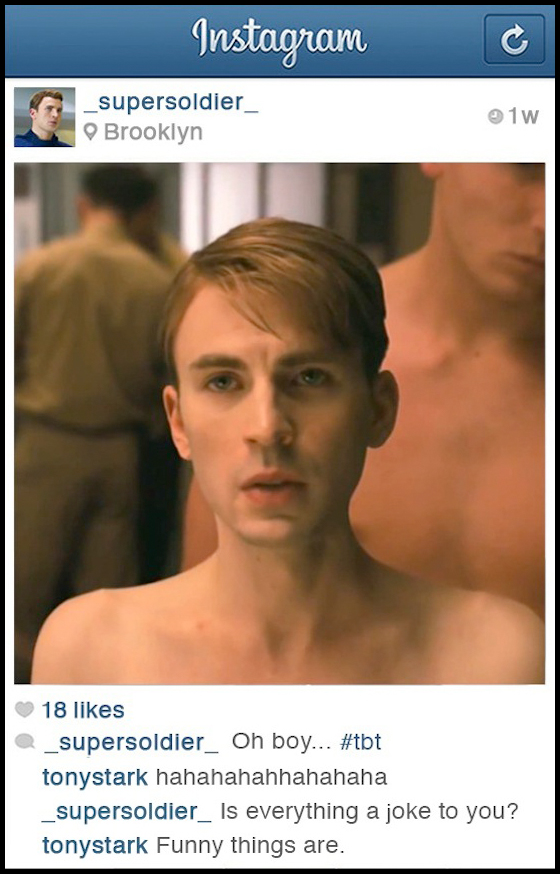 In this lovely pick, Natasha Romanove manages to share a photo of both friends and food. And yes, after a hard day you are find to carb load.

But that doesn’t answer the question of who is taking the picture though… Loki was probably still free at this point I suppose. Whoever it was, nice choice of filter. 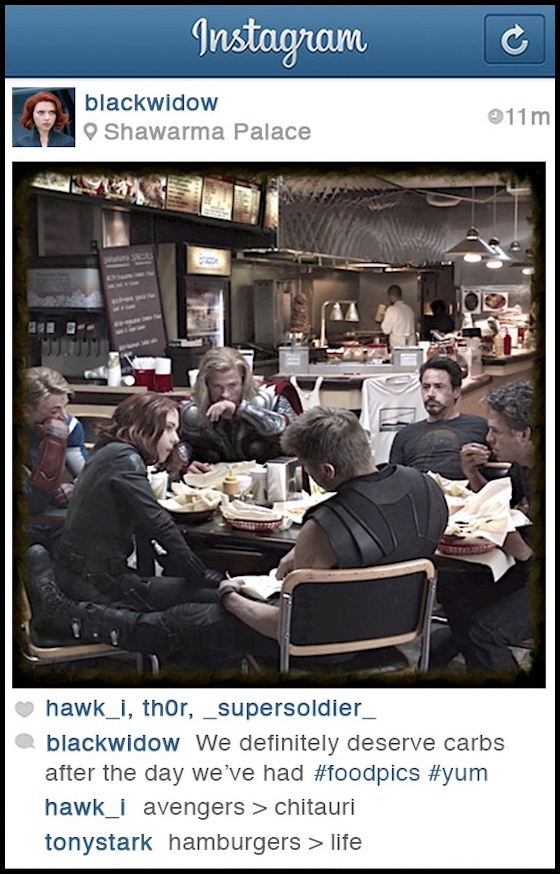 Source: Babble – have a look

Good diet advice from Captain America here. Plenty of people share dietary advice online, but it is good to see this tidbit being so kindly offered without any judgement or expectation. His friendly attitude to it probably stems from his diminutive shape when younger.

All that said, it does feel a little unfair considering Steve called dibs on the Super Soldier Serum.

Maybe the last person I expected to be pushing for peace, Nick Fury is clearly fed up with the team he painstakingly created trying to pull itself apart. This is probably made worse by the fact they guy he picked as hall-monitor seems to be the one causing all the trouble (bad Captain America – go to the director’s room).

WhatsApp (iOS|And) – or your IM of choice

When there is a war brewing, never underestimate the element of surprise.

2. Keep your cards close to your chest.

Yet Iron Man seems to have broken both of these rules in a single conversation. Maybe it is because he forgot rule three…

3. Never IM your enemies when your drunk. 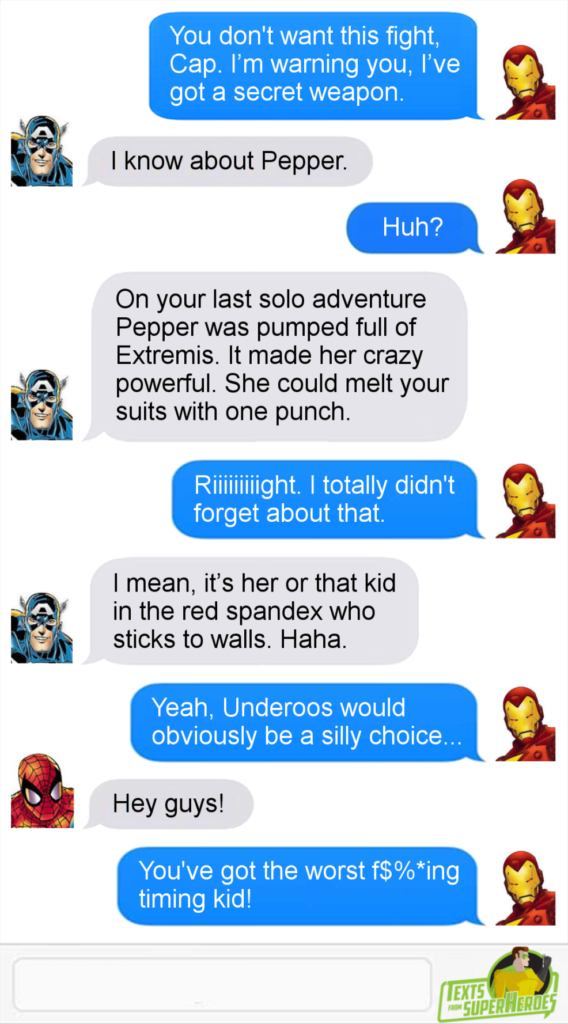 If you do have to fight make sure you are doing it for a reason. And, try not to let the guy who is friends with insects pick your motivation… next they will be invading Mars for a bag of sugar. 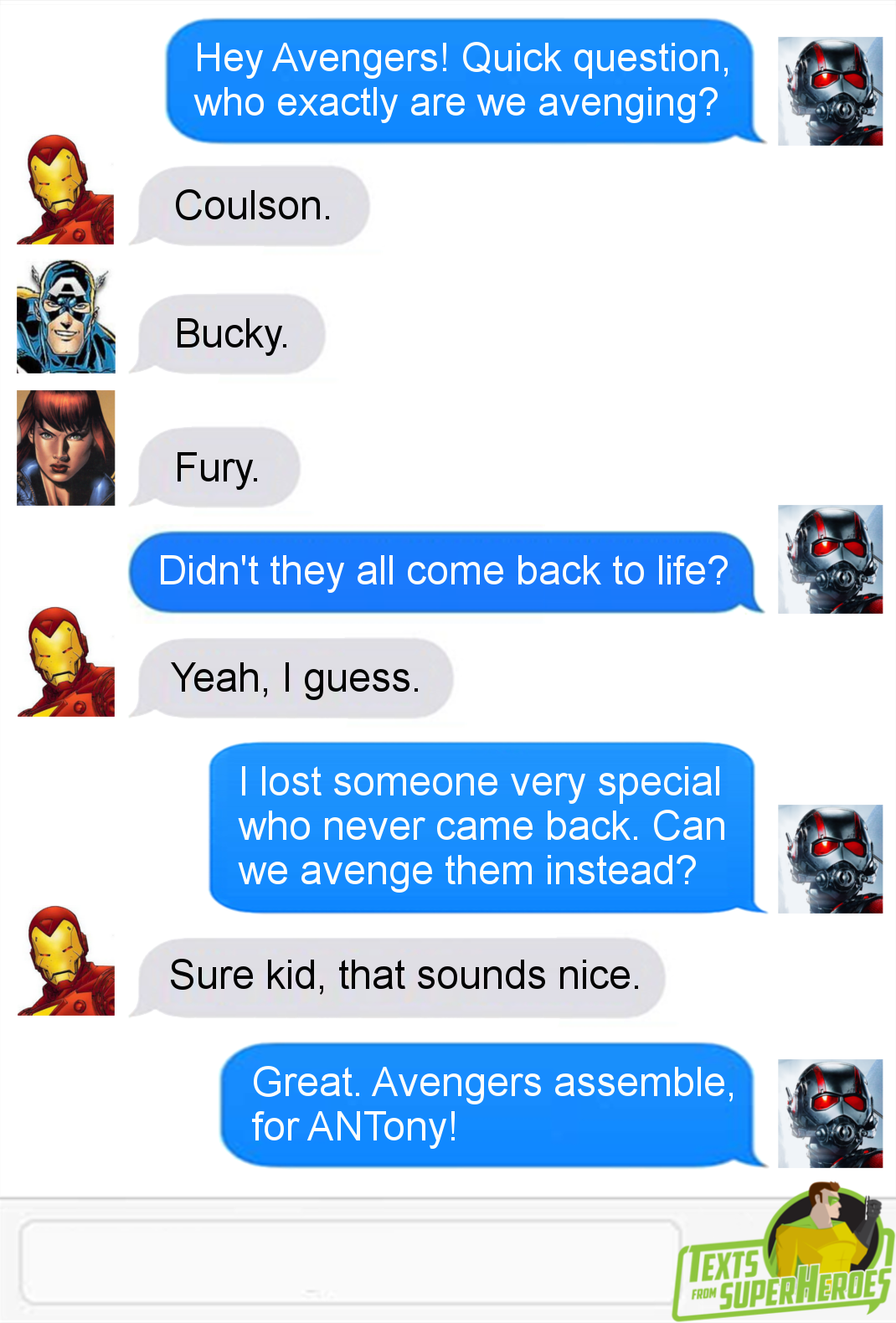 Source: Texts from Superheroes – head over to see more

Three games to get you ready for Marvel’s Captain America: Civil War

7 creative things you can do with your old floppy disks