We’re lucky enough to have a team in Tokyo, so we decided to get them to tell us what’s cool in mobile gaming in Japan at the moment. While Japanese ‘Otaku’ (geek) culture is huge, not all gaming is geeky, but they can be surprisingly different to what we’re playing here! Some of them might make the leap to ‘western markets’, and others perhaps not…

Check out the games our Japanese team are playing below, and say hello to our Japanese Editors, Yoko, Chris, Junko and Sayaka! 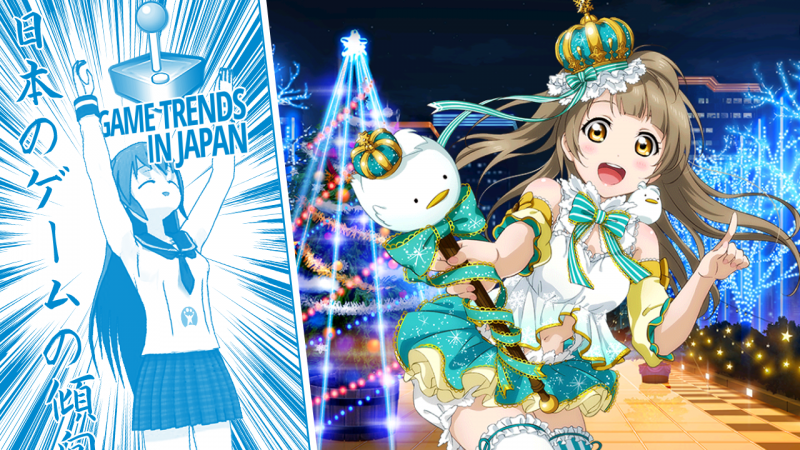 I like to play various kinds of games, like Puzzle, Rhythm action (Music), RPG, and Simulations.
I often play many different kinds of games for a short time, however there are 2 games I’ve been playing for a long time, Puzzle & Dragons and Lovelive School Idol Festival.

I’m going to introduce one of them this time! 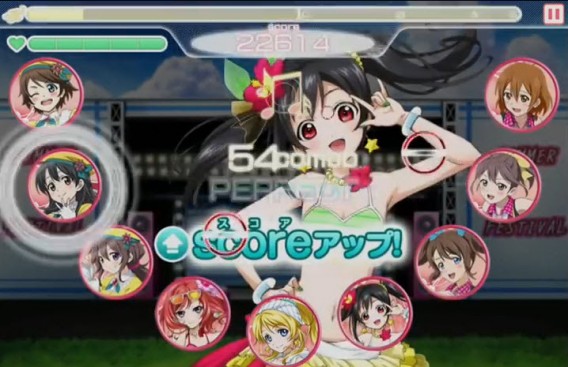 Lovelive School Idol Festival is a rhythm action game of an ‘Otaku’ (‘geek’ in Japanese) anime called Lovelive. Lovelive is about a girls band called μ’s (Muse) which was established at high school (it’s like club). In Lovelive School Idol Festival, you pick 9 girls from μ’s or other original girls in the game to make your own girl group, and you can enjoy playing rhythm action game with songs from μ’s . You level-up and upgrade characters, so you can get higher scores more easily as you progress.

Now the Lovelive game is popular not only among Otaku men but also women regardless of whether they are Otaku or not!

It’s currently only available on the Japan App Store, but the TV series has been licensed for North America, so watch this space!

Hey Gamers! This is Chris from Softonic Japan. As a Japanese American kid growing up in Tokyo, I spent countless hours playing games that are considered classics today such as Mario Brothers, Dragon Quest and Final Fantasy. I remember how much I loved playing those games alone or with a bunch of my nerdy friends. Those were truly good times. However, as I grew older I spent less and less time playing games to the point where I was completely detached from my former obsession.
That’s just what happens when you get older, right? You lose interest in things you once loved. But I am here to share the good news that I have found a new love for games in recent years with the appearance of the iPhone in my life. I have been playing games on public transport, in meetings, and at times even while I’m walking (which is extremely dangerous obviously, don’t do it!). The point is that games are back in my life and I am into games again.

Watashino Host Chan S(My Cute Host S) is a game with a subject matter that is unique to Japan. In this game the player becomes an owner of a Host club, where female customers come to be attended by ‘attractive’ men (hosts) and engage in flirtatious conversation. One drink, which usually costs around 20 USD, buys about 30-45 minutes of undivided attention from the host. Host clubs are very popular in japan and people are willing to pay up to around $600 for a night of ‘good’ conversation and company.

The aim of the game is to grow your host club and become the number 1 selling club in Kabukicho, Shinjuku which is the top district for host clubs. You start by going out to the streets to recruit attractive men who will work at your club: this part is similar to catching Pokemon. Then you train the hosts through battles with hosts from other clubs. Host battles take the form of ‘call battles’ which are basically drinking songs. While all of this is going on, a love story plays out between you, the player and the hosts, with an audio track featuring anime voice actors and nice music. The more you progress in the game the more you get to see the love-story unfold, which obviously is an incentive that keeps the ladies coming back for more. This is just like what happens to the ladies who keep going back to the same host bar to see their favorite host.

Watashino Host Chan S is the perfect game for those who are interested in a glimpse into the bizarre and luxurious world of Japanese night life.

Honestly, I am not particularly a game lover, but there are some games I occasionally get into. LINE Pokopang was one of them.

My intimate relationship with Pokopang started from LINE stickers. LINE is the most popular communication app like Whatsapp, almost half of the population here are users. To smoothen text communication, there are so many kinds of stickers available in LINE. I found Pokopang stickers in LINE. They become available only after you download the game Pokopang. I didn’t find them particularly cute, but I wanted to have more variety in my sticker collection, so I just downloaded it. I never expected to get addicted…

LINE Pokopang is a simple yet addictive puzzle game. It’s a match-three game with a one-minute time limit. When you draw a line to connect 3 or more adjoining blocks of the same color, they will vanish away and shoot veggies at the monsters. The more block you connect at a time, the more power you get to shoot. 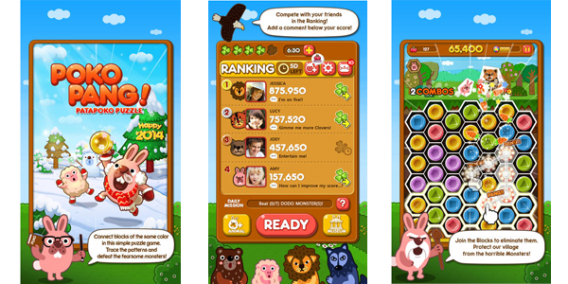 This is a LINE app, you can ask your friends in LINE who play Pokopang to battle together and to give you clover which is the right to play. Your score and your friends’ score are shown after the game. After checking scores, naturally you feel like you wanna beat some of your friends. The addictive point about this game is here. This puzzle game is fun and easy to play, and additionally you can connect, compete, and collaborate with friends just like Candy Crush Saga through Facebook.

Hello, Gamers! I’m Sayaka! I like playing console games (Dynasty Warriors, Monster Hunter, etc…) and mobile games. Regarding mobile games, I especially love escape games and time management games. And now I’m really into Puzzle and Dragons, but I want to talk about something else…

Shinjuku Dungeon is an 8-bit action RPG. This stands out in choosing Shinjuku station as an environment. Shinjuku station is a major railway station in Tokyo. The station was used by an average of 3.26 million people per day in 2011, the world’s busiest transport hub (and registered as such with Guinness World Records). The station has 36 platforms. There are well over 200 exits, including an underground arcade. Although I often use Shinjuku station, I easily get lost. It’s like a labyrinth: the ideal place for a game! 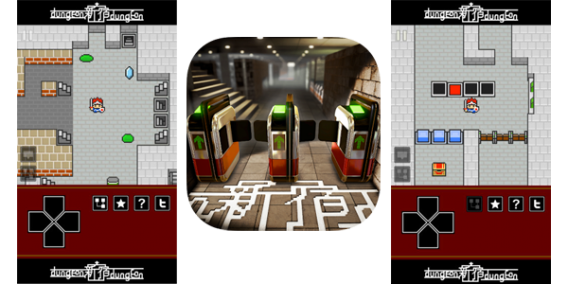 This game reproduce Shinjuku station faithfully and you can explore the station freely to find treasure in the Tokyo Metro. This is not only and interesting game, but a helpful reference for traveling in Tokyo!

Next month the Japanese team will be back with more apps and games that are hot in Japan right now. Stay tuned for more!