Who could have predicted it? After what has seemed like forever, Facebook’s exclusive messaging service, Facebook Messenger, has finally taken off. Although it’s been on the social media platform from the start, it wasn’t until a few years ago that the app finally earned a place on the phones of millions of people around the world.

That milestone didn’t come easy. First it had to make lots of improvements and go through a necessary transition: letting people use the Messenger app independently of the Facebook app (something many users had been clamoring for).

So if you’ve fallen under its spell to the point where you’re a frequent Facebook Messenger user, check out our top tricks and tips to improve your app experience on Android or iOS.

Many of us have a love-hate relationship with the “Like” button. But beyond the controversy that has surrounded this aspect of the social media platform for years, this icon has a hidden feature in Facebook’s messaging service. If you want to send a big thumbs up to a friend, one that will occupy almost a quarter of their display, just tap it, hold it, and the icon will get bigger. Pretty cool, huh?

When Emojis arrived a long time ago… it was clear that they were here to stay. They’re all over social media, websites, forums (in fact, that’s where they originally came from), and above all, messaging services. Emojis are especially useful on the latter platforms, and Facebook Messenger is no exception.

If you want to change the default emoji in the app (which is always the “Like” button), follow these two steps. First, tap the “Information” button in the upper right-hand corner of your chat (or the person’s name, depending on how it appears; it all depends on the Messenger version you have installed). Next, tap “Emoji” to select the one you prefer. How easy is that? From now on, instead of the “Like” button, the emoji of your choice will appear on the right.

We’re big fans of looped animated images, popularly known as GIFs, on social media and messaging platforms. Who would have predicted they would become so popular? They were created almost two decades ago, but they’re gaining more fans by the day… so let’s make the most of them!

To send a GIF, tap the emoji button and select the tab clearly marked “GIFs.” Using the search bar that appears, you can search Facebook’s huge database for the best GIF for your chat at any given moment. See? It’s not that hard. 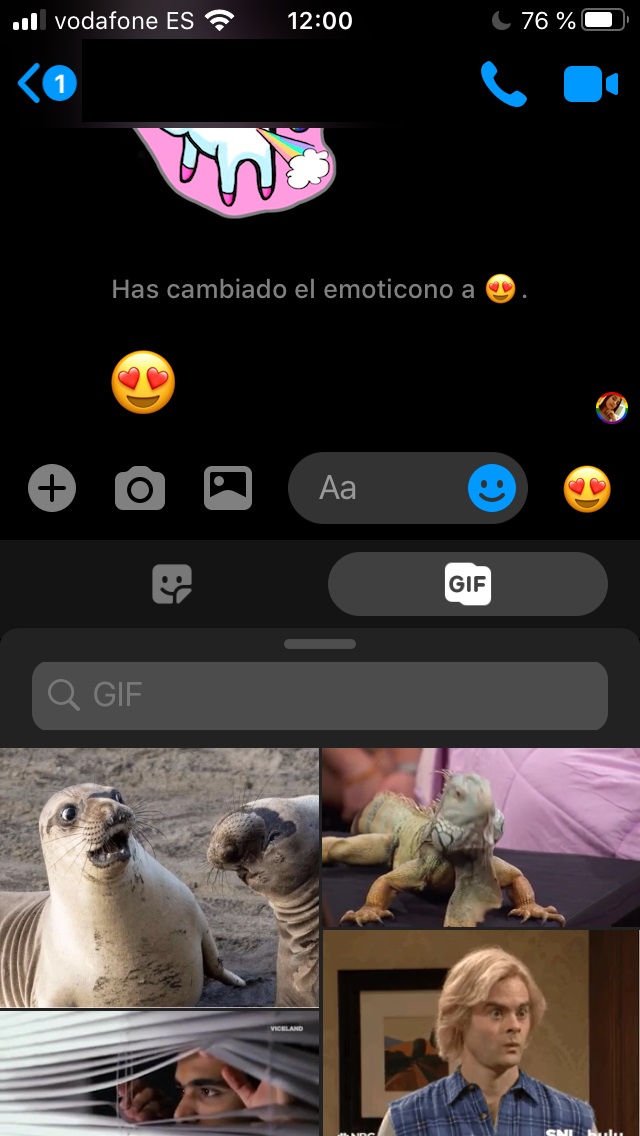 Did you know Facebook Messenger has a ton of hidden games you can play by yourself or with one of your friends? These games are also popular on other apps and programs, since they’re an easy way to stay entertained in any situation (and they’re sure to raise a smile).

This isn’t the first time we’ve discussed them on Softonic. Check out this post to find out how to unlock them all. We promise that they’re easy to access!

One of Facebook’s latest major additions in terms of messaging has been video chat rooms. Well, they’re not exactly new, but they have become one of Facebook’s most exciting features in these times of confinement because of their potential to connect millions of people around the world through their cameras.

Messenger Rooms are video conferencing rooms where you can connect with other people through links. And that’s the key (quite literally): you need a link to join a group chat, otherwise, we’re sorry to say you won’t be able to access it.

To create a room on your smartphone, tap the option at the bottom called “People” The first thing you’ll see is “Create a room.” Tap it, followed by the “Try it” button and “Share link.” That’s all there is to it! Now you can share the link with whomever you want to invite into your room for some fun conversation. 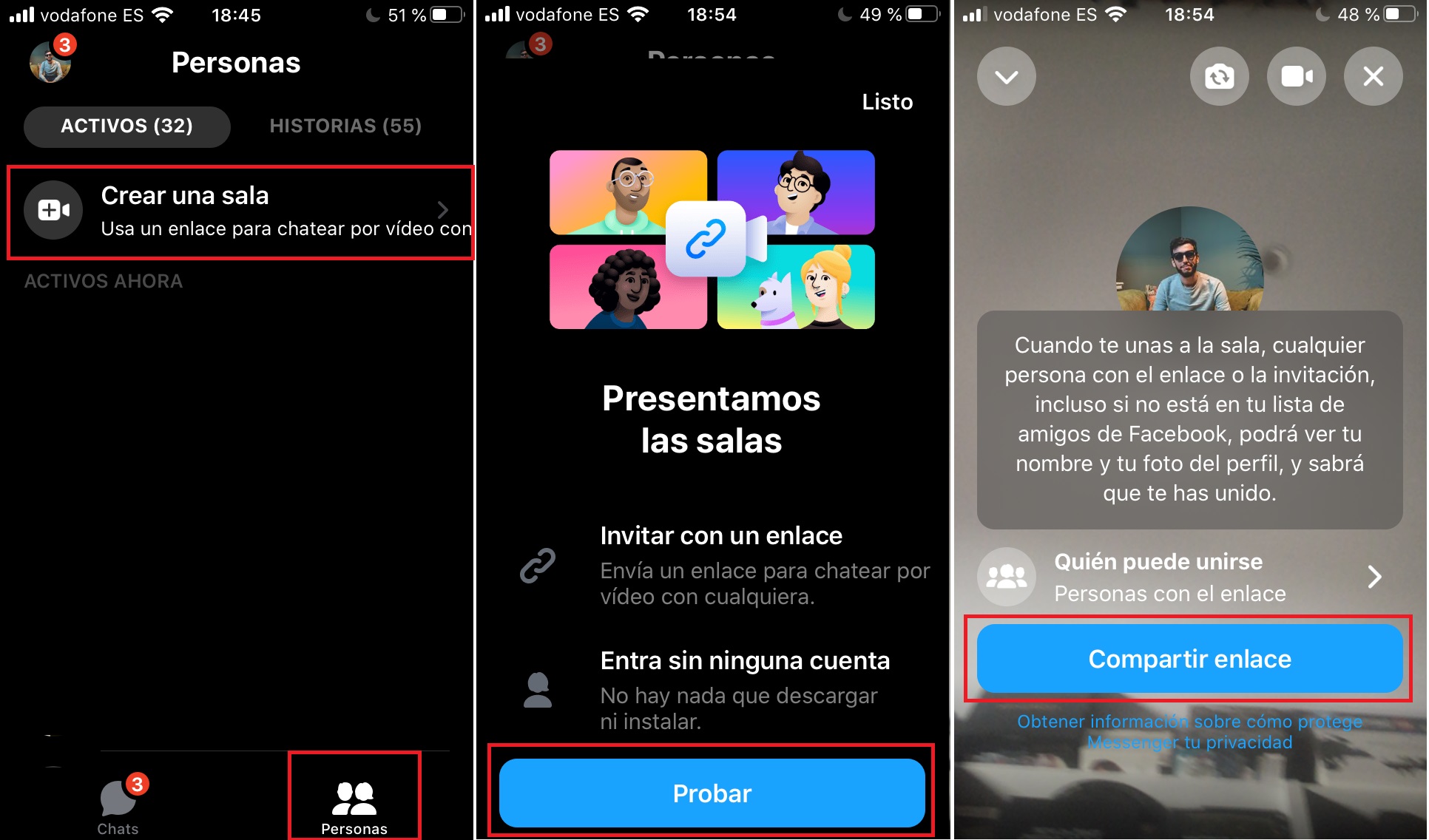 Keep in mind that a Messenger Room can be locked or unlocked once a call starts. Also, the room creator can remove any unwanted participants, any participant can leave the room if they feel uncomfortable, and participants can report the room name if they believe it violates Facebook’s community standards. If you have blocked someone on Facebook or Messenger, they won’t be able to join a room you create, and you won’t be able to join theirs if they are logged into their Facebook or Messenger account.

Also, the rooms feature lets you choose from two types of sessions: for anyone with the link (anybody who has the link can join your room, even if they don’t have Facebook or Messenger) and only for Facebook users (only people with a Facebook account can join your room).

We’ve all had a nickname at some point of our lives, and in fact, many of us probably still do. When we were kids, it was normal for friends to call each other by names that will probably stick with us until the day we die. The Facebook Messenger app remembers nicknames, so if you want to assign your old friend the nickname you called him in grade school, or around the neighborhood, you can. 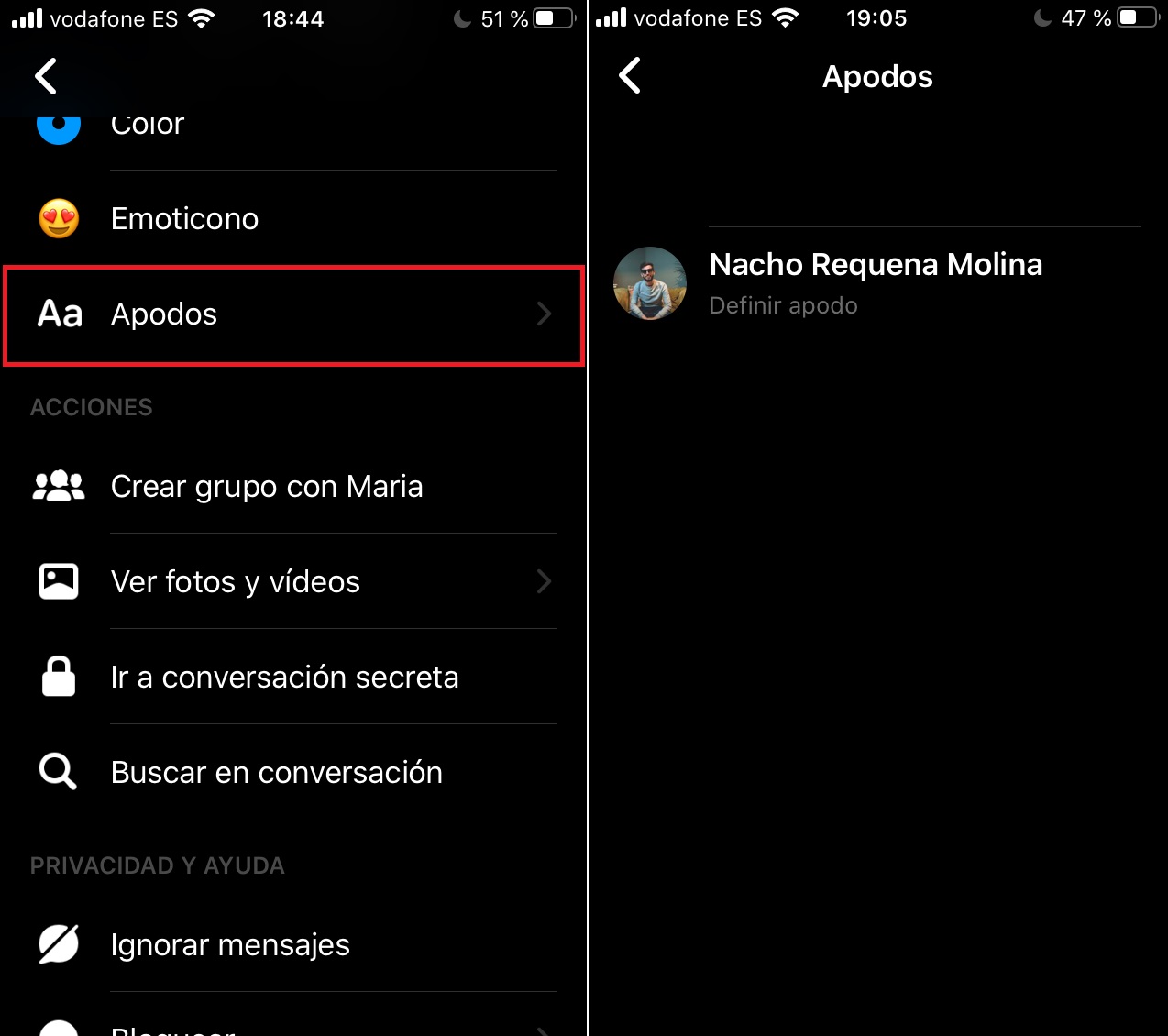 Every so often, the person you’re chatting with shares some vital information, the kind that you know you’re going to need in the future. But life gets in the way, you forget to write it down, and you end up kicking yourself, because as your conversation with that person continues, the information gets lost in the chat. If you ever need to recover information from your conversations, there’s a very easy way to do it.

Just go into the chat and tap the “Information” button on the upper right side (or tap the person’s name). Under that field, look for the “Search in Conversation” option. The chat will display a search bar that you can use to find all the information you need. Our advice: make sure your search terms are as specific as possible, avoiding general words. That’s all there is to it.

We always say dark mode is the best option for any chat. You’ll not only extend your battery life, but also reduce eyestrain and headaches from too much glare, etc. In short, there are only advantages.

A growing number of apps have night mode as the predetermined setting from the operating system. In other words, if you enable it there, you don’t need to enable it in the app. However, if you have any issues, Messenger has integrated it as an option as well.

To enable it, just open Messenger and tap your profile photo (upper left side). “Dark Mode” is one of the first options that will appear. Here, you’ll be able to choose from three modes: “Enable,” “Disable” and “Use system setting.” The latter field will appear if you have enabled it from your operating system. But if your firmware doesn’t allow it, just select “Enable.” 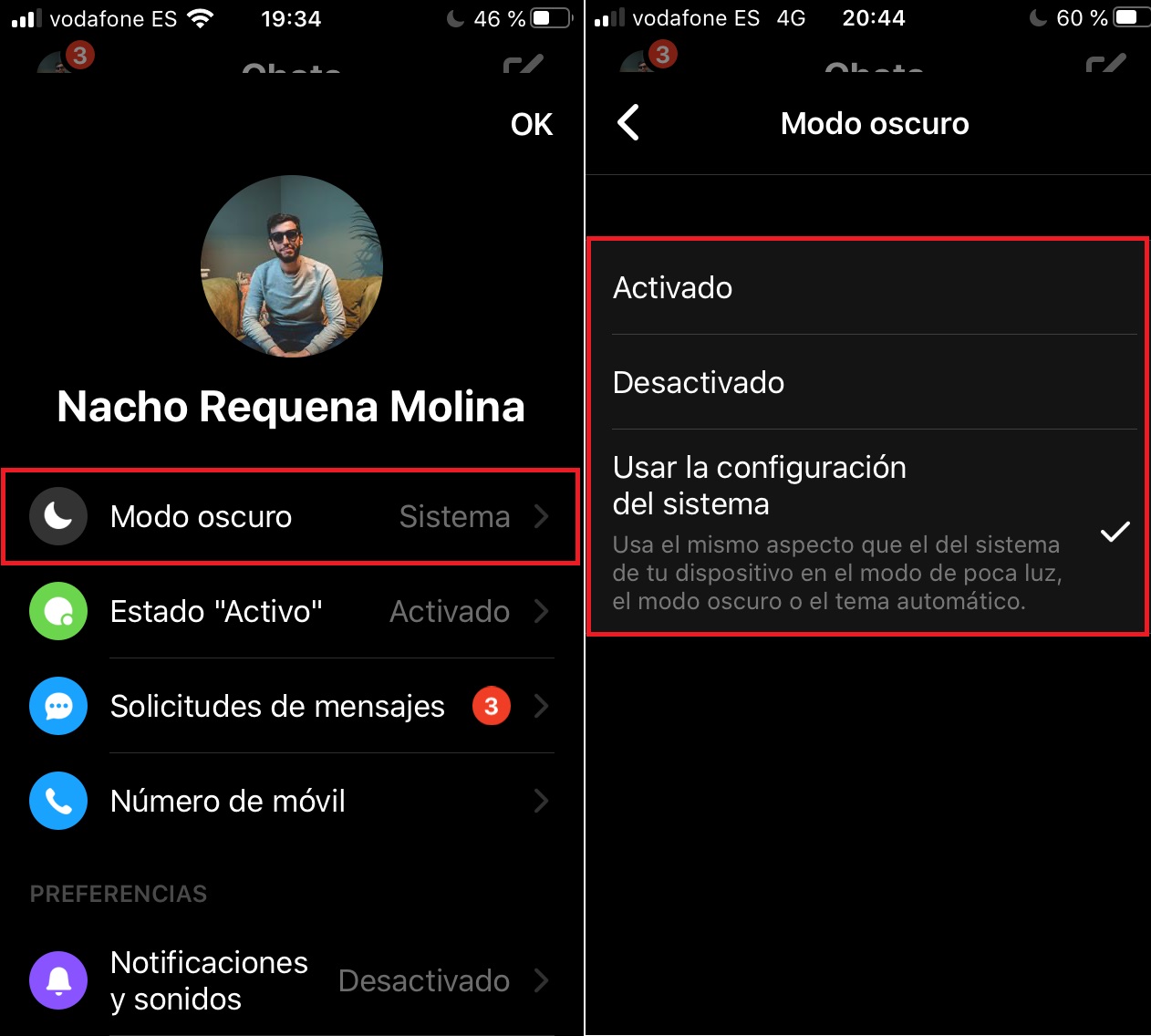 If for some reason your smartphone doesn’t let you enable night mode with the above options (you get an error message or have some other issue, which can happen), you can always change the color of your chat.

This process is easier than it may seem. Just tap “Information” or the person’s username and then “Color.” Then you can choose your favorite tone, such as black to simulate night mode, or pink to make your chat more eye-popping than ever. The choice is yours. 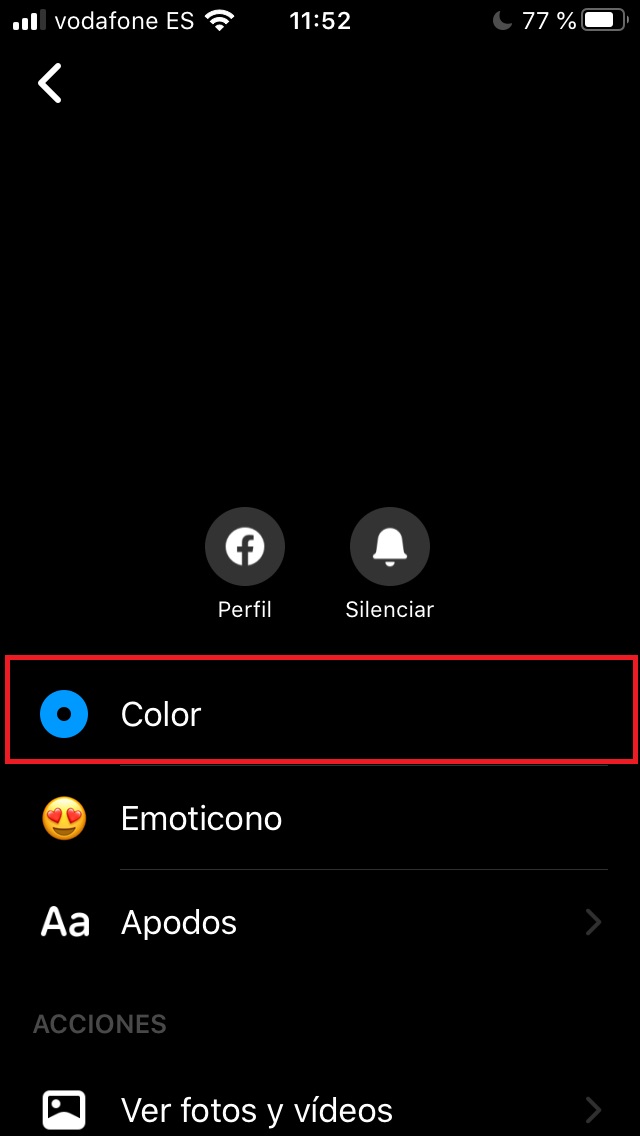 This app has an interesting blocking feature, one you might find useful. Facebook Messenger lets you partially block users; in other words, you can make your profile invisible to a person, but they can still contact you. Tap “Information” again and look for the last option on the list, called “Block.” When you open it, you’ll see the two options we mentioned.

The first one is “Block on Messenger.” When you block someone on the messaging app, they’ll only be blocked on Facebook Messenger, not on the social media platform itself. So you will no longer be able to receive calls or messages from this user (and if you unblock them in the future, the good news is that any messages sent while they were blocked won’t be resent). Another thing to keep in mind: you and the blocked person can still view each other’s profiles, exchange messages on posts and communicate through group calls (because in the end, other people are involved).

And the second option is “Block on Facebook.” This is a bit more categorical and definitive, as we mentioned above. If you select this option, you will no longer be friends with that person on the platform. And this user will be blocked on Facebook Messenger too. In short, option one only blocks them on Messenger (not on Facebook), and option two blocks them on both.

One of the most controversial aspects of messaging services is how “nosy” they are. Let us explain. These apps are constantly sharing information about every little thing you do: when you open the app, a green dot appears; it shows how long ago you were active; if you’ve read your messages, etc. But you can get away from prying eyes on Facebook Messenger.

Just tap your profile picture again and look for “Active Status.” In general, it should appear as “On” by default, but you can modify this option by moving the slider to “Off.”

When you turn it “Off,” your friends and contacts will no longer see when you’re online or if you were recently active; in other words, they won’t have any information. In turn, you won’t be able to see whether your friends or contacts are active (the typical law of reciprocity in these apps). By the way, you need to disable that option on Facebook as well. Otherwise, you’ll appear as “Active” on the platform. 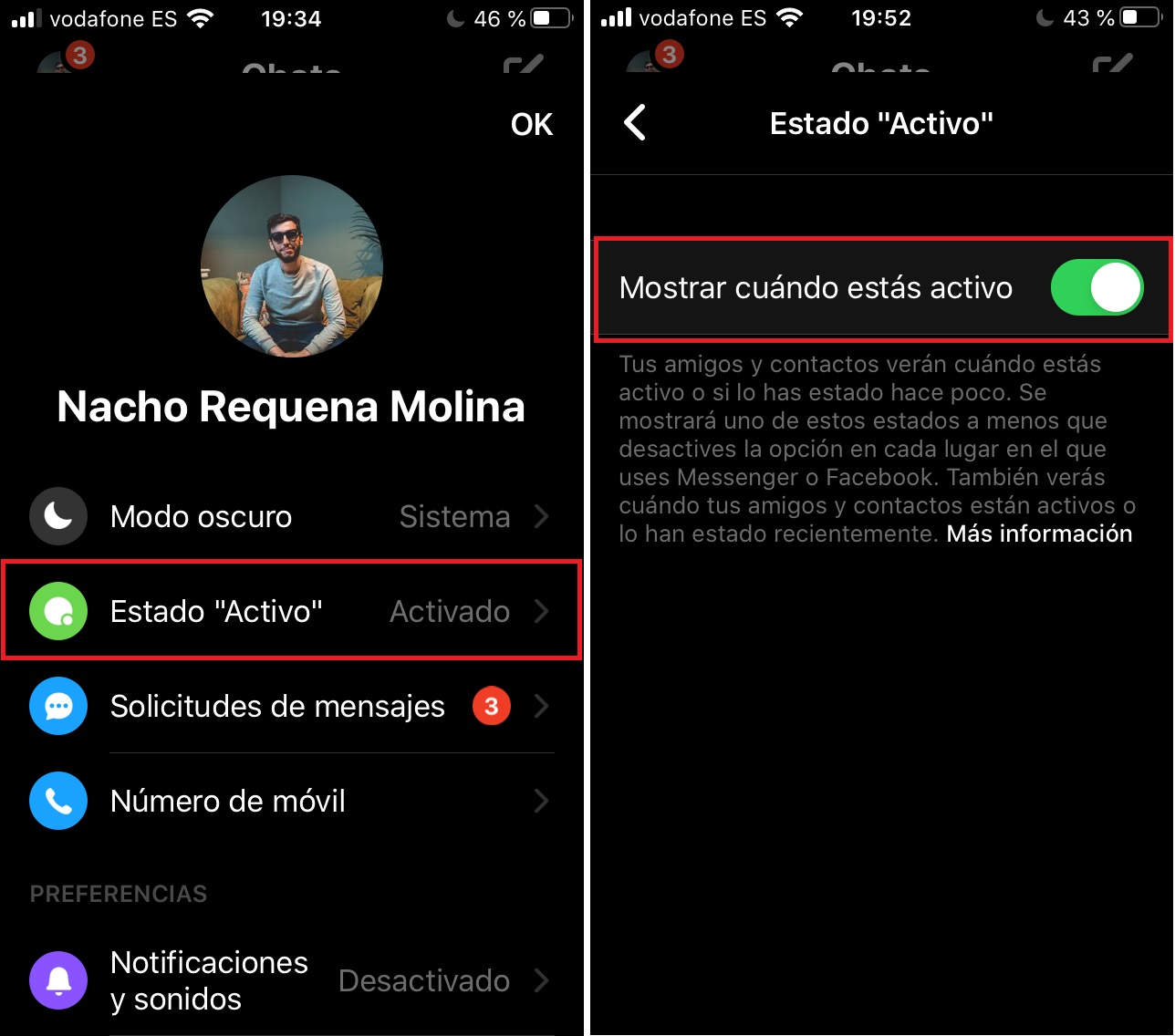 Have you ever stopped and thought about how many videos, photos and other files your contacts send you? We’re sure the answer is “a lot,” since messaging services are always blowing up our phones.

WhatsApp makes it really easy to go back and view all the files a person has sent us… and Facebook Messenger is no different! Just tap the “Information” icon (username) and go to one of the last options on the list: “Shared Media.” Tap it and you’ll see all the items you have shared to date. 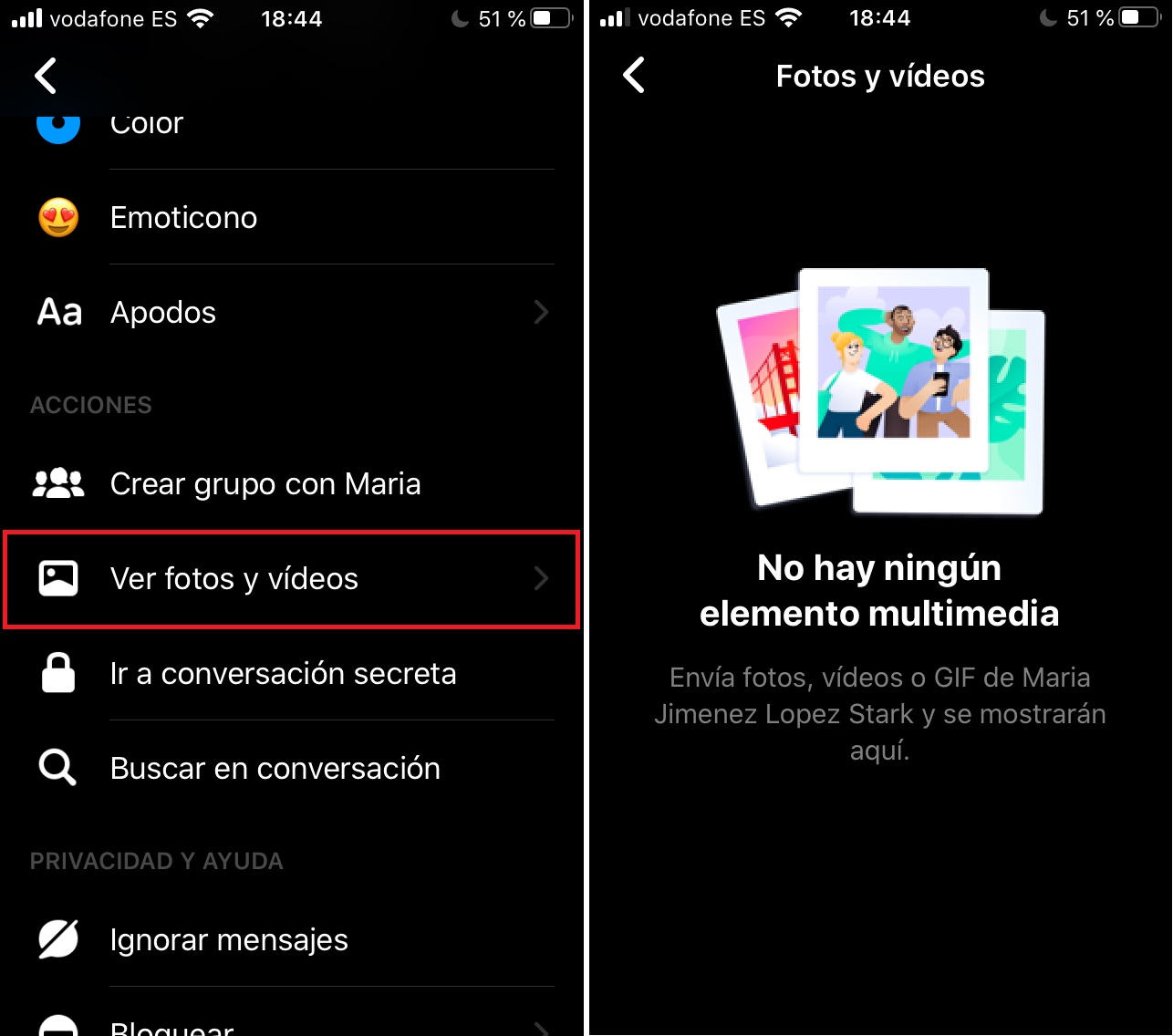 If you’re a “normal” user, this option probably won’t interest you. However, if you have a business with a separate account or a professional profile, having more than one Facebook account is pretty standard. In these situations, Facebook’s got you covered. 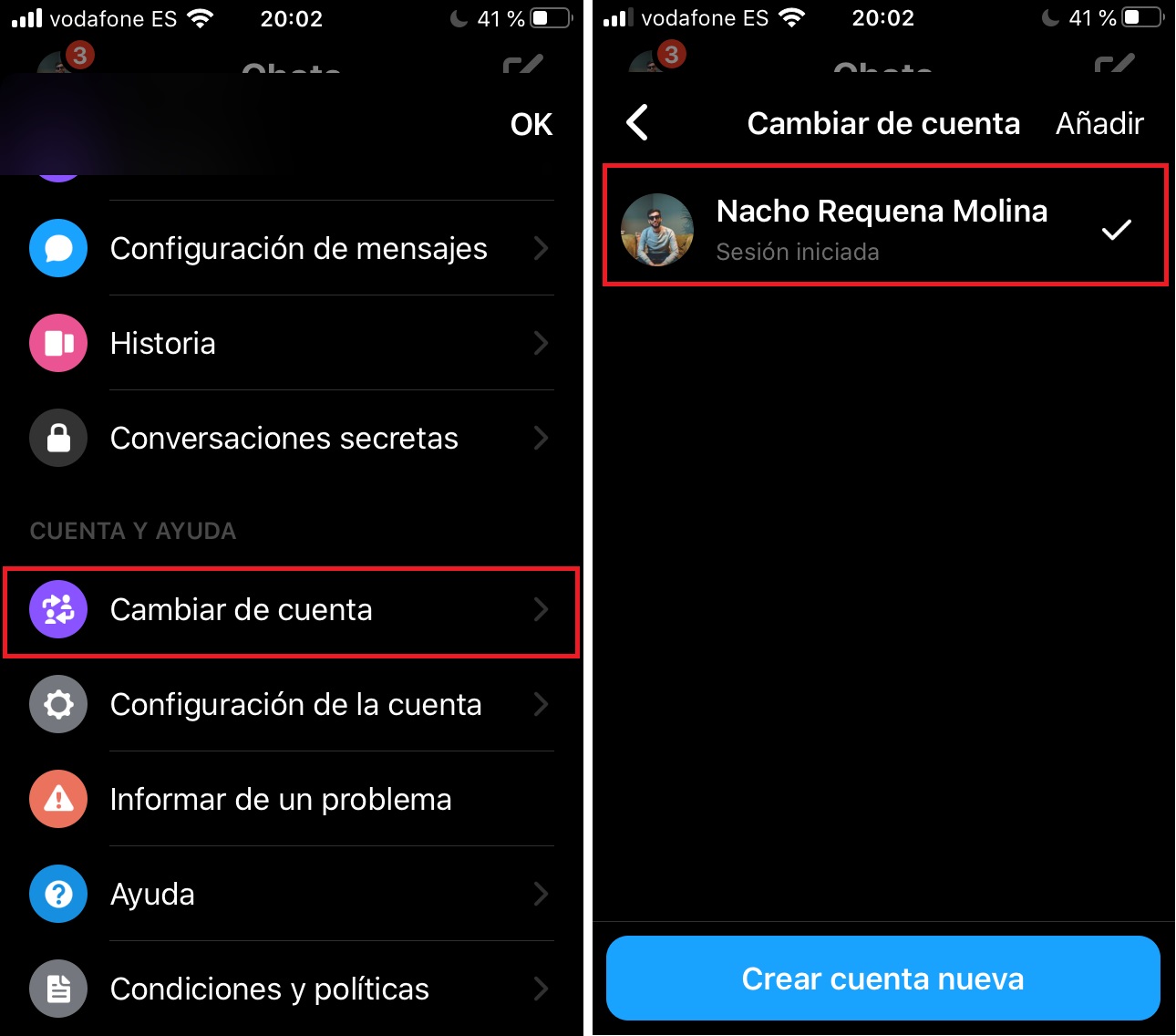 Our final trick/tip (or however you want to call it) is perfect for anyone who’s a bit guarded about their personal information: secret conversations. Messenger can enable these types of conversations with any user, to the point where Facebook itself won’t even know your chat exists. 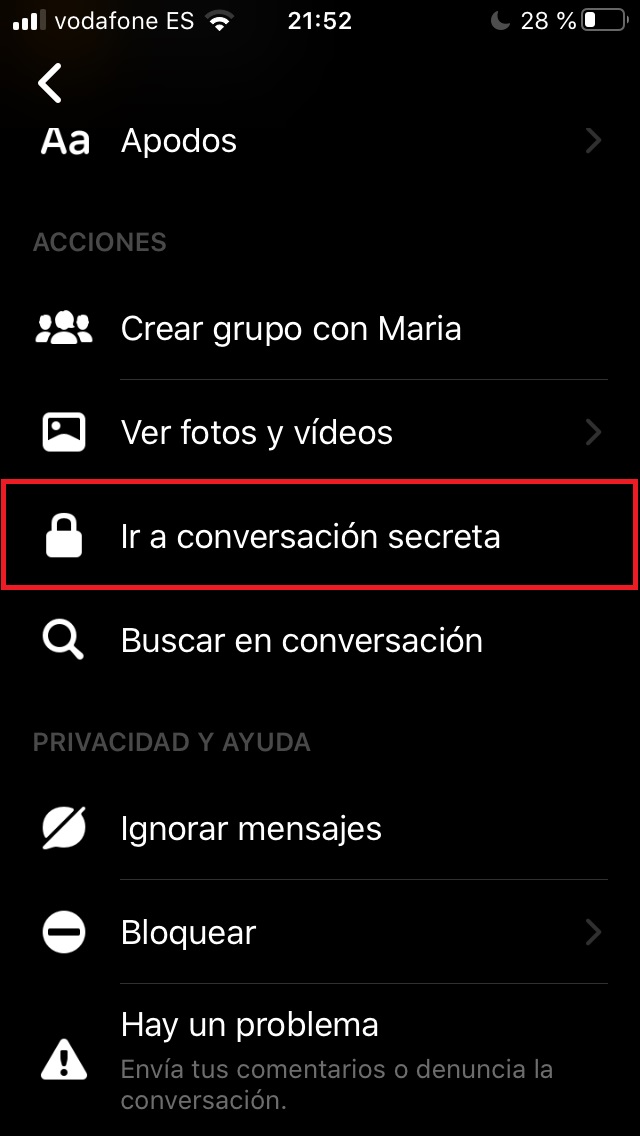 And that brings us to the end of our review of the best tricks and tips for Facebook’s instant messaging service. We hope these features make your experience on Facebook Messenger faster and easier, because in the end, that’s what counts, isn’t it?

How To Do Homework in Sims 4 in 3 Easy Steps