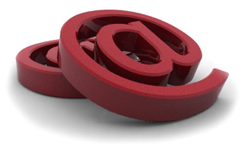 Google has finally opened Gmail to the public, which means that you no longer need an invitation to open up an account. Gmail has thus become one of the largest webmail services in the world, not only in terms of users, but also in terms of storage space. Starting at 1 GB per user during its first year, Gmail is now constantly increasing its storage space by the second. Google say they plan to keep on doing so as long as they have enough space left on their servers.

However, more long in the tooth Internet users know email wasn’t always so advanced. There was a time when webmail didn’t even exist and messages were managed through classic email clients like Eudora or Outlook Express. Email was physically downloaded and stored on your PC, so that you could only check it from home unless you left copies on the mail server. Besides, limited-bandwidth connections made it very difficult, not to say impossible, to send or receive oversized email messages.

Then, web-based email finally appeared, with Hotmail as one of its biggest representatives. Hard to believe though it sounds, Hotmail offered only 2 MB of storage space which were increased up to 250 MB in July 2004, only three months after Gmail’s launch. Nowadays, following the fashionable web apps trend, there’s a large variety of webmail services you can choose from, with online access from anywhere, large numbers in storage space, spam filters and a lot more of features.

Email has naturally evolved from being a somewhat useful desktop application to one of the fastest, most effective online communication tools. It’s totally integrated in our daily lives, to such an extent that it feels just natural to ask your friends for their email address instead of their phone number. After more than 40 years of history, we’re eager to see what email has to offer in the following decades.

By the way, in case you’re wondering, we’ll remain faithful to our Gmail accounts.