Virtual DJ is a great piece of DJ software for Windows PC and Mac for learning how to DJ with digital audio files on virtual turntables. These days there are many great DJ controller software options out there like Serato, Traktor, and Ableton but with nearly 35 years of history behind it, we’re concentrating today on Virtual DJ 8 and Virtual DJ Free.

Today, we’re going to go through the basics of DJing and mixing. You’ll still need practice if you want to become a professional DJ, but this Virtual DJ tutorial should get you started. There are four parts to this intro – importing your library, basic controls, preparing tracks, and mixing.

Mixing songs together sits at the heart of the art of DJing. At its most simple you mix songs together in such a way that they sound harmonized as if they were a single song. It’s not as easy as it sounds though, as you’ll need to beat match both songs, slow or speed up the tracks so that the beat on them both is exactly the same, and then line up all the other musical elements so that the songs work with each other. The idea is that you guide your set from one song to the next without breaking the music.

This means that you need more than a simple media player to mix effectively. You’ll need a virtual crossfader to control whether the left deck or the right deck is playing, a virtual equalizer will help too, and a sampler will allow you to add other sound effects and elements on top of your mixes too. This is where Virtual DJ by Atomix Productions comes in, offering a robust package that covers all aspects of DJing. Once you’ve downloaded Virtual DJ and gone through today’s tutorial, you’ll be able to start mixing and take your DJ career to the next level.

As well as a PC or Mac or the Windows operating system, you’ll need hardware including a soundcard with two audio outputs and some headphones if you’re going to really get started. This will allow you to play different songs out of your speakers and headphones at the same time, which will allow you to line them up and beat match them both. It is possible to mix music without this basic setup but it will be next to impossible for beginners to do so. You can also add other DJing hardware to your Virtual DJ setup once you’ve mastered the basics.

How to write sheet music for free with MuseScore 2 ►

If you’re a new DJ, you’re going to need to organize all your tracks so that they’re easy to access when you want to play them. When you open Virtual DJ Free, start by finding your music library using the file tree on the left. Right-click and choose Virtual Folder, which will create a place you can keep all the tracks, remixes, and playlists you want in Virtual DJ. Drag a few songs you like into this folder, and then one by one drag them into the decks. This will allow the app to analyze the beats per minute (BPM) of each song. We think it’s a good idea to put any song you play in the app into your Virtual Folder, as it’s more comfortable than the messy Windows file tree. You don’t want to be searching through iTunes while you’re juggling your next beat transition. 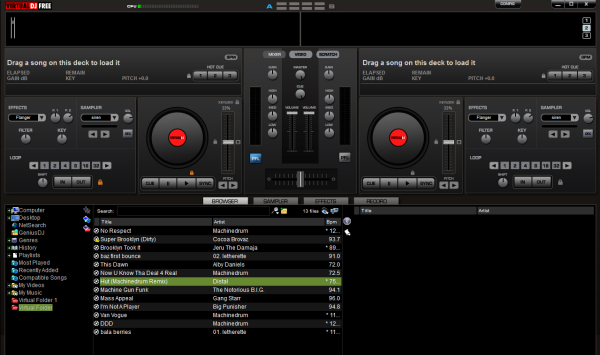 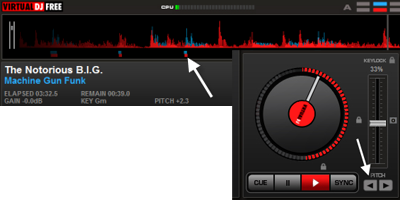 Tap Space then let go of C, and you should have two tracks playing in time with each other. With the cursor, drag the cross-fader to the right to fade out deck A. That’s it! You can also fade out deck A using the volume slider, and by using the High, Medium and Low knobs – but it’s best to play with them once you have the basics down.

You will have to experiment with where to bring in new tracks, and how quickly to move the cross-fader. Try out different combinations of tracks and you’ll soon be able to put a set together!

Feel free to ask in comments for any more Virtual DJ advice.

How to get the most out of Free Audio Editor ►

How to use Garageband to edit songs ►

How to add free sound clips to your audio project ►

How to use Audacity: 14 beginner tips ►