You Need to Start Getting Excited About VR Theme Parks 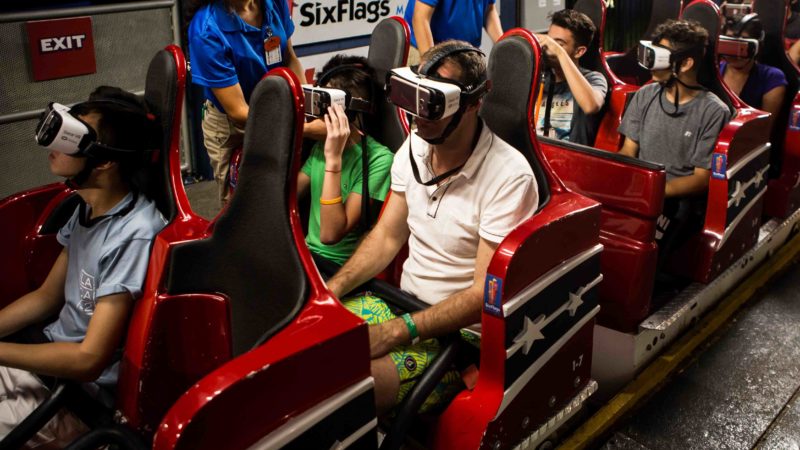 If you still haven’t had a chance to play in Virtual Reality yet you’re in for a treat. Despite massive price tags standing in the way of the masses experiencing Virtual Reality huge VR developments are taking place all the time. What is more exciting for everybody who doesn’t have an extremely powerful PC or PlayStation VR setup is that some of these developments are being made outside of people’s living rooms. VR arcades and VR Theme Parks are going to be a big thing and they’re going to be awesome.

How do we know they’re going to be awesome? Well some are already here and they look incredible so we’ll say it again:

You need to start getting excited about VR Theme Parks

1. Rise of the Demon

We looked at Derren Brown’s Ghost Train ride at the UK’s Thorpe Park a while back and it has recently received an update called Rise of the Demon. Brown is a master in mind manipulation, and he expertly uses the capabilities of today’s top of the range VR systems and the physical sensations offered in the real world to deliver a truly terrifying experience.

Although horror is an obvious choice for VR due to the total immersion it offers, action genres can also provide visceral VR experiences. Like Brown’s Ghost Train Nomadic VR are combining virtual and real world elements to give you a truly mind blowing experience. Think about the haptic response on the iPhone 7’s home button but for your whole body. If it is possible to simulate a real sensation then the VR headsets can provide the visuals to go with it. The result is literally feeling like you are in the middle of a situation more incredible than you ever thought possible.

These 3 Terrifying Virtual Reality Experiences Will Blow your Mind

Check them out now

Mind blowing VR experiences do not need to be built on subtle nuance either. They can be built on good old fashioned adrenaline pumping action that you find yourself in the middle of. This is exactly what Anvio VR are trying to create and from the looks of it, they’re succeeding. A 2,1250 square play area can be the scene for literally anything. There experience “City Z” shows that they know what they’re doing.

Exciting times then. We’d love to hear about any exhilarating VR experiences you’ve had in the comments.